Nintendo is no stranger to putting their stamp on genres outside of their wheelhouse. Their take on racing gave birth to the legendary Mario Kart franchise. Their foray into the world of real-time strategy gave us the brilliant Pikmin series. Most recently, Nintendo entered the crowded shooter market with their breakout hit Splatoon.

They don’t always hit with their forays into new territory, but their track record of making something great within unfamiliar territory is ridiculous. This time, they’ve struck gold with Arms, a 3D arena fighter with motion controls.

The gimmick of ARMS is that all of the characters have springy arms that let them punch great distances. As a gameplay concept, combined with the emphasis on motion controls, this set my skepticism alarm on blast. Before getting my hands on it, I thought it looked kind of dumb, and the motion controls were guaranteed to be terrible, right?

Wow did Nintendo shut my skepticism down almost immediately. Once you get your hands on the game, it all makes sense. The combat engine is elegant in its simplicity, yet there are so many nuances that give it depth.

Each character is beautifully designed to not only look cool, but their personal gameplay traits make dramatic differences to the battle. Ribbon Girl’s multi-jump ability makes her very difficult to tag, while Master Mummy’s armor lets him press forward even when you hit him. Furthermore, the addition of selectable arms gives you the opportunity to optimize your play style or counter your opponents. Newcomers can jump right in and have a blast, while fighting game vets can get absorbed in the finer points of its tactics and strategy.

Furthermore, the game’s motion controls don’t undermine the experience, as they’re actually great. Once I got a hang of it, I found it to be a viable way to play. Movement and punching behaved exactly how I expected them to, and you get the added benefit of being able to curve both punches independently; something not possible with the traditional control scheme. That said, standard controls also work really well, so there’s options to keep all players happy. Personally, I prefer standard controls, but I don’t feel weighed down with two Joy-Con controllers in my hands.

Multiplayer is the focus here and there’s no shortage of ways to throw down with friends or online rivals. Locally, you can play with two to four players on one console split-screen, across multiple consoles, or even link multiple consoles to form your own lobby. The game allows for 1v1, 2v2, 1v1v1 and 1v1v1v1 combat, as well as side-games that involve volleyball, basketball, and target punching. 1v1 is my favourite way to play, but the variety is impressive.

2v2 adds a twist in that teammates are tethered together. It probably helps keep the camera from getting too confused, but there’s also the gameplay element of if one person gets thrown, their teammate does as well. Unless you’re playing with a friend and you’re able to communicate, this mode is a bit of a mess. 1v1v1, while heavily criticized during the Global Testpunch, is good, if you’re able to stay out of the middle. If you get ganged up on, you’re toast.

Online, you can battle in a standard issue Ranked match, or jump into the Party Mode lobbies match players up across all of the different gameplay types. This allows you to get in and out of matches quickly, while cycling through the different modes keeps things fresh. 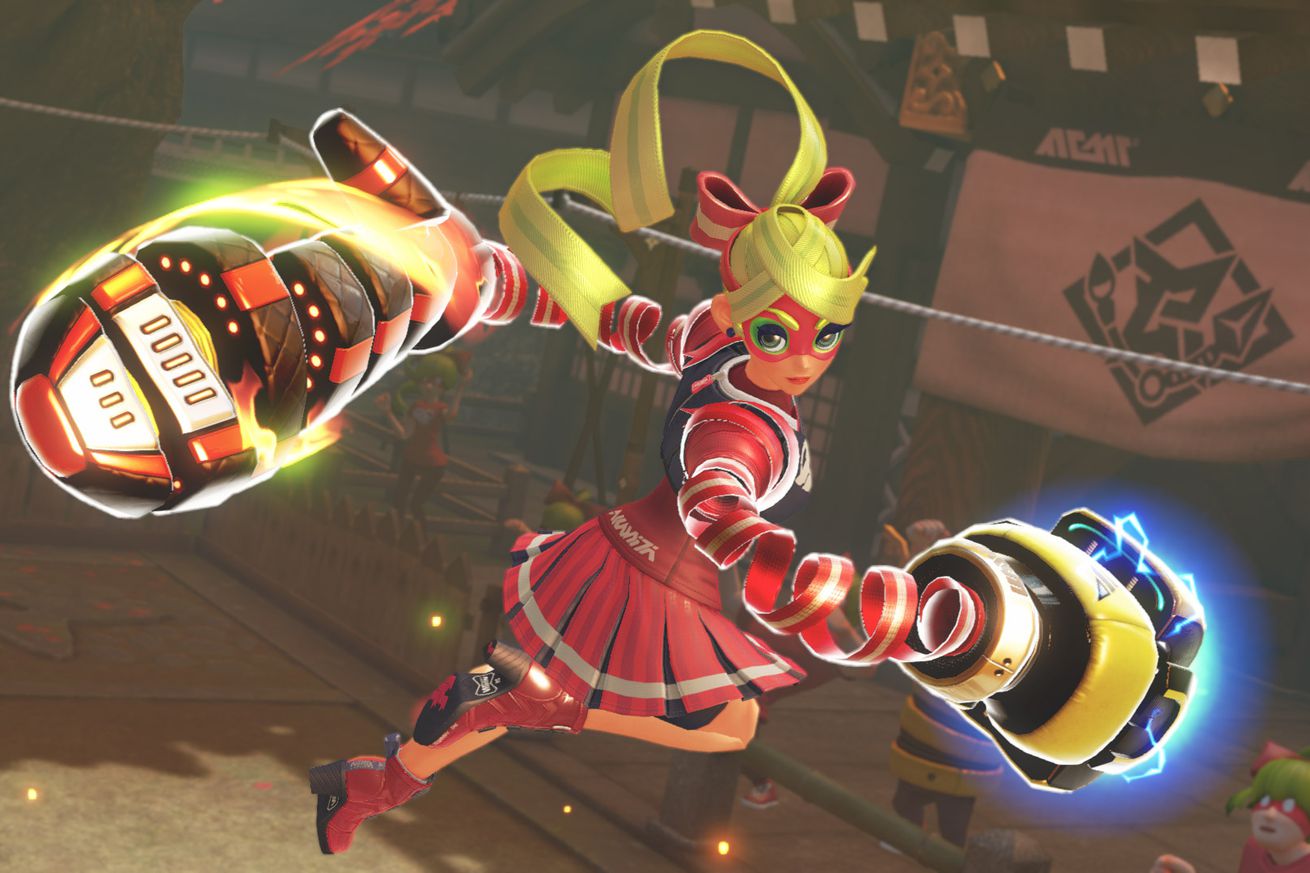 The single player experience isn’t the greatest, but it’s far from a Street Fighter V-level disaster. In the Grand Prix mode, you’ll fight your way up the ladder in hopes of defeating all comers and winning the title. It’s a standard arcade mode that allows you to earn money that can be used to unlock more arms. What surprised me about this mode was that it actually packs quite the challenge. You need to beat it at level 4 to unlock ranked match, and it was really a struggle for me to get through. Felt great once I overcame it though.

Another note about the Grand Prix is that you can play the entire thing in co-op. It’s a nice touch to have something you can work through with a friend. What’s disappointing though is the fact that the story aspects of the Grand Prix are incredibly weak. Despite having built wonderfully designed characters and a vibrant world, Nintendo did virtually nothing to flesh it out. The intros are bare bones and the conclusion is very disappointing. You’ll play this mode a lot for the money and to fill out the crowns on the character select screen, but even just a little bit more story content would have made a world of difference. 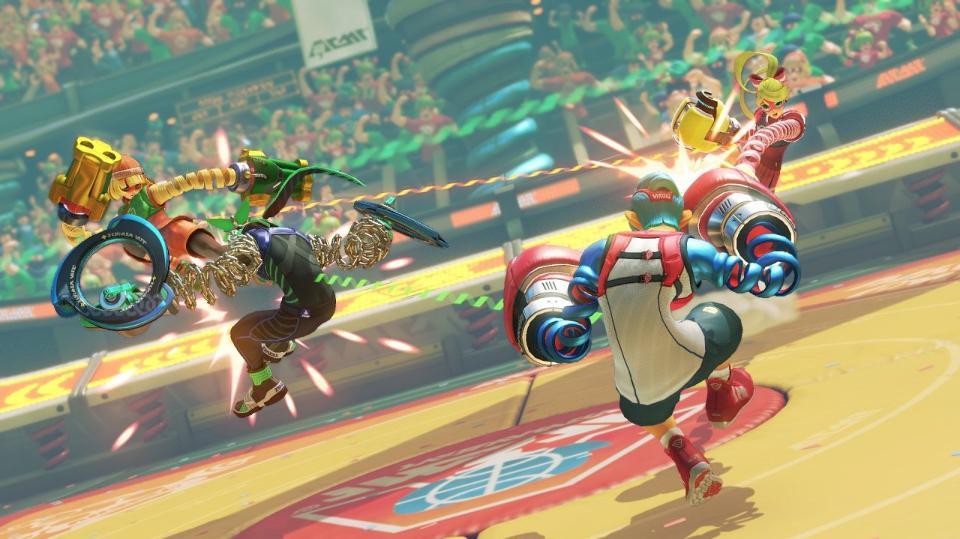 One more thing I wanted to note with regards to character loadouts. While the game encourages players to mix and match arms, there’s no way to have more than one set of three arms at the ready. Should you need to change beyond the three available, you’ll have to go all the way out to the main menu to change. This is particularly annoying when playing with others who have different preferences, as you can only do a mirror match where the two characters have completely different loadouts by having a second console available.

ARMS doesn’t quite score the knockout, but it does connect with one heck of a first punch. Air-tight gameplay with a smooth learning curve and a ton of different ways to enjoy it make it a sure-fire hit in the growing Nintendo Switch catalogue. Had it featured a better single player experience and some UI adjustments, this would have been With Nintendo having promised even more characters, stages and arms as free DLC, this already great package is only going to get better.

For only 300 Twitch channel points, you can potentially unlock a hot tub stream AND get your name written on my chest!
Choose your fighter
🚨STREAM HYPE!🚨
#airhornx3! Dubs All Day crew is here for more Rogue Company! Come join us!
BANK!
Excited for the next Ninja Turtles game?