Who wins in the ultimate battle between knights, vikings, and samurai? Ubisoft hopes you can answer that question by playing For Honor. This novel game mashes up elements from team-based shooters and fighting games to create something unique. Does this battle between some of mankind’s greatest warriors live up to the hype?

At its core, For Honor is a fighting game. Players control a warrior from one of the three factions, each with their own unique attributes, weapons, and moves. Generally speaking, your goal is to kill your opposition, though there are some area control objectives as well depending on the mode.

Unlike a traditional fighting game, combat takes place in more realistic environments that aren’t exactly designed with combat balance in mind. A map might contain a large field, narrow stairs, multiple stories, or open-ended bridges that open the door for unique combat possibilities. Catch an opponent off-guard standing on a lower level? Jump off the ledge and smack them with a devastating downward strike. Near a large body of water? Grab your opponent and throw them in the drink for an instant kill. This element of environmental realism adds unique gameplay opportunities that you won’t find in most traditional fighting games.

Combat is also fundamentally different in a number of different ways. The gist of combat is played like a Zelda or Dark Souls game. The left trigger acts as your enemy lock on, and from there, you have the ability to swing your weapon, block incoming attacks, or grab a foe while they’re blocking. The game doesn’t feature complex inputs, though memorization of a few simple button strings will help you execute a few combos.

From there, the game adds a few extra layers of depth to make things interesting. At any given time, you can be holding your weapon on your left, right, or above your head. This denotes which angle you’ll swing your weapon, but also the direction you’ll block an incoming attack. If your directions match and your opponent strikes, you’ll block the attack cleanly. Furthermore, if you’re able to hit the heavy attack button at just the right time while your blocking arrow is in the correct position, your warrior will parry the incoming attack, giving you ample time to retaliate.

Attacking is also dictated by a stamina meter. Players cannot simply mash their way to victory, as fatigued characters will dish out weaker attacks while being more easily knocked down by a guard break or throw. As such, combat is generally a more measured affair, with players taking their time to read their opposition and make the right move based on the options available. My personal favourite thing to do is to throw someone off a bridge for the instant kill, but that tactic is much easier said than done against a savvy foe.

On top of all of that, each character comes equipped with unique weapons and attributes. Some are well-rounded combatants with no real strengths or weakness. Others are lighting quick speedsters that rely on fast attacks. There are ranged attackers that want to keep you at bay with their lengthy staffs and spears. Then there are brutes who want to pummel you from in close. As with any other fighting game, you’ll need to understand the strengths and weakness of them all in order to overcome them in battle.

One thing that drove me nuts about the game is that during the moments where your execution really matters, the game has no means of teaching you how to do these things properly. For example, when the Peacekeeper grabs you, she can stab you up to three times in the gut. However, the timing for the three stabs is really tight. The game has no means of teaching you what that timing is. Your best bet is to fight against a dummy AI and hope you can figure out the timing on your own.

As a means of getting your feet wet with the game’s intricacies, as well as immersing you in the lore, the game contains a Story mode. Separated between the three major factions, levels are broken out in a way that lets you try out every character in the main roster. The main plot is fairly thin, but it’s much better than most fighting games, at it actually leads players along a series of events through gameplay that doesn’t feel like fighting game matches bolted onto a story. I’m glad that it at least flows well.

If you’ve got bloodlust for human flesh, online play is where its at. You have the option of squaring off in 1v1, 2v2, or 4v4 battles, in standard death match, Dominion or team-based Brawl modes. I love the purity of a 1v1 fight, but there’s certainly a dynamic that fits the tone of the game when you fight in teams. That said, the extra people make for fights that can be less than honourable. If you get ganged up on, it can extremely difficult to fight short-handed. It’s not impossible, but your odds of success lower dramatically. 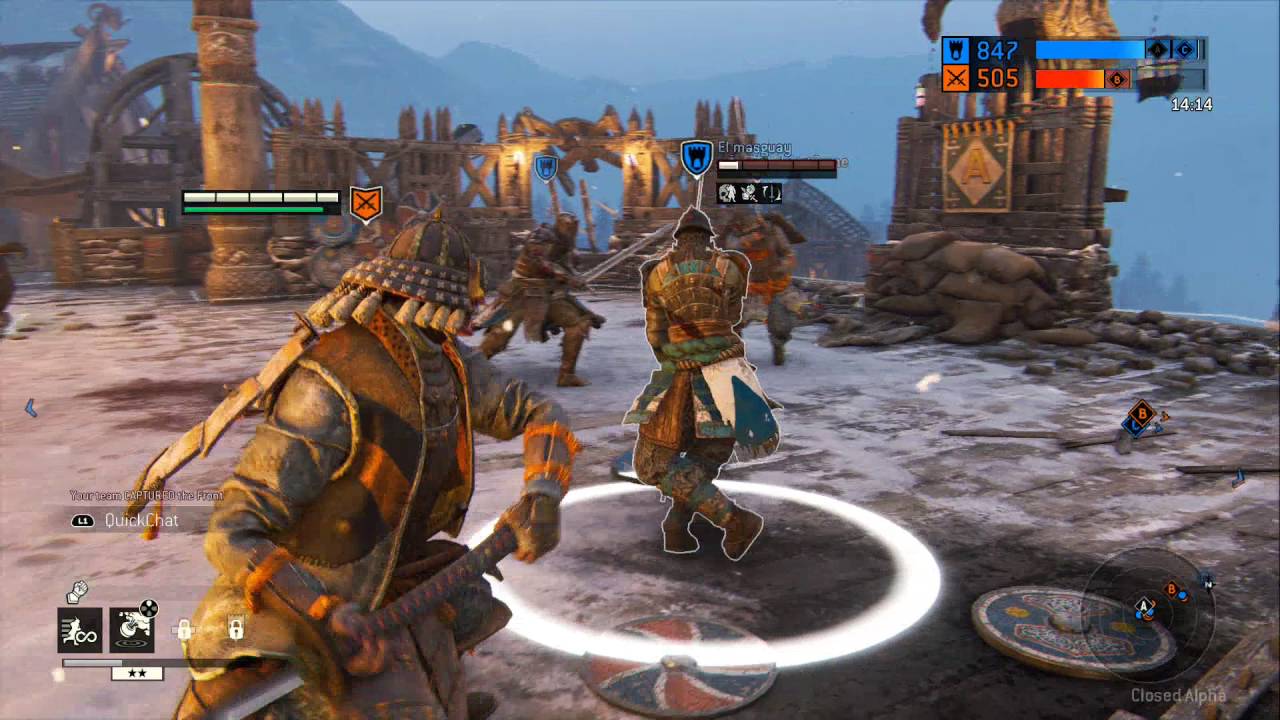 Despite being one of the best selling games of 2017, much of the player base has dissipated. Getting any matches at all proved to be problematic, especially when I tried to play in duel matches. Really wanted to play more of it, but the people just aren’t there, at least on PlayStation 4. Matchmaking was super slow, and oftentimes would end with a failed connection.

For Honor is a novel take on the fighting game genre with mainstream commercial appeal. Its gorgeous graphics and Call of Duty like team-based multiplayer is going to draw players into a fighting game that normally wouldn’t try it. While it falls short in certain aspects, such as its slow 1v1 lobbies and weak training tools, the game makes up for it with a fresh take on the genre that largely succeeds on its vision.

Unfortunately, due to its small player base, the main online portion of the game is difficult to access. If you can get it on the cheap, there’s a decent story mode there. The game is even better if you can get your friends into it as well. Too bad I didn’t pull the trigger earlier, as this really could have been something I deeply invested in.

Buy For Honor Now From Amazon.com