Somewhat overlooked in the hype created by the Pokemon Let’s Go Pikachu and Let’s Go Eevee reveals, Pokemon Quest was revealed and released on the eShop on the same night. As the latest spin-off game in the franchise, you venture off Tumblecube Island; a world where the land and its inhabitants exist in voxel-form. Based solely on the game’s free-to-play premise and quirky art direction, I was ready to outright dismiss this game without even giving it a shot. Many hours of gameplay later, and I’m glad I gave this a chance.

This game puts the classic gen 1 Pokemon in a new style of game. The island is broken up into different levels, or expeditions, as the game calls them, each with varying difficulty levels. After you pick your starting Pokemon, you’ll begin to play through each level, where your Pokemon will fight off waves of enemies, collecting power-ups and items as you go. Once you beat the level, you can use the items to strengthen your Pokemon or create meals that will attract new ones. You’ll continue this process across the island, gradually increasing the strength of your team while filling out your roster of Pokemon. 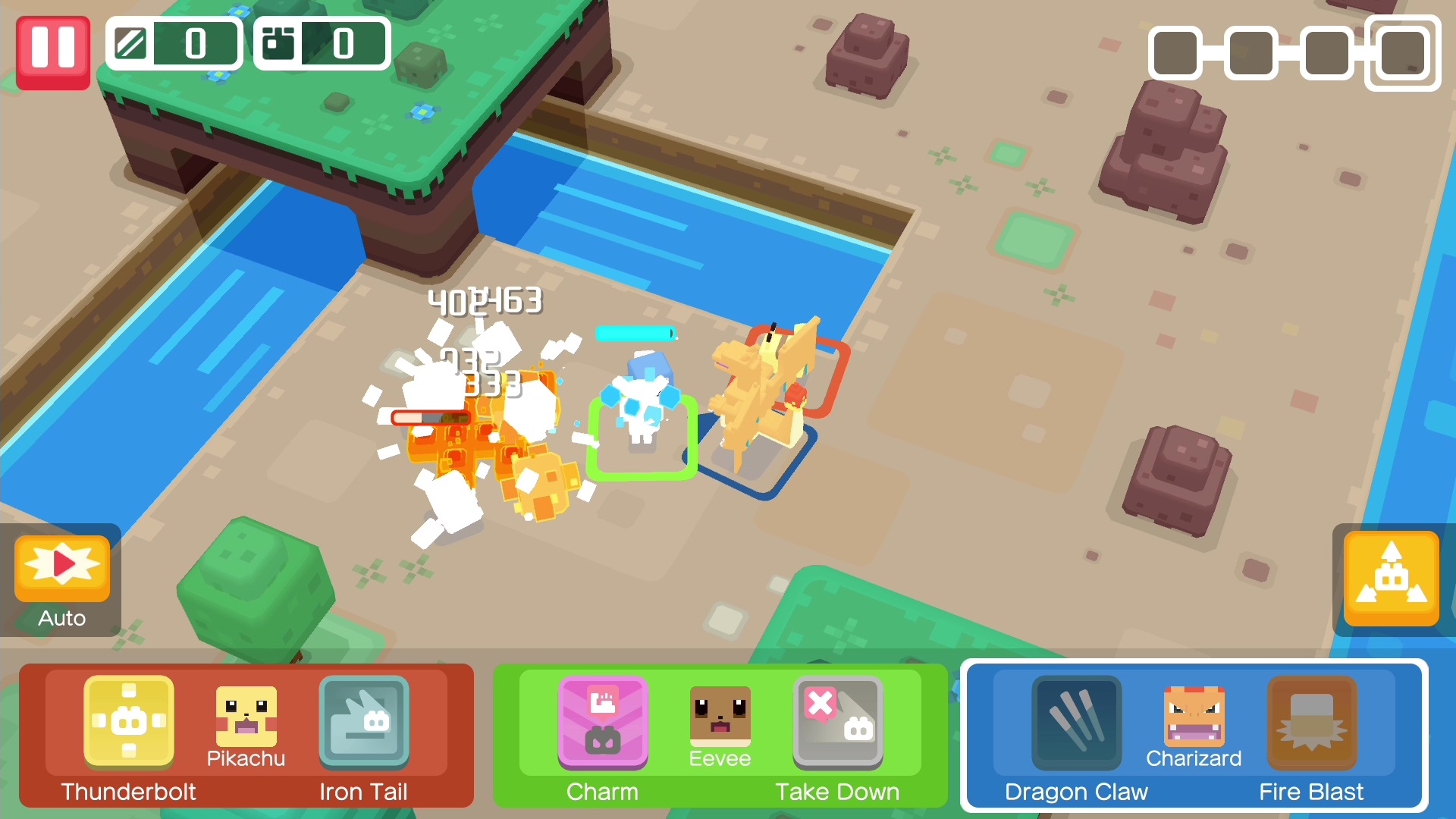 What really confused me at first was how passive the gameplay experience was. You don’t actually get direct control of your squad. Instead, they move and perform quick attacks on their own. If you want, you can tell each Pokemon when to perform it’s special attacks or when to evade, but you can also just hit the Auto button and let the computer handle everything. Yes, the computer can make some boneheaded decisions at times, but based on how little control you have over the action in the first place, I generally don’t think it’s worth it to micromanage their moves. Once I let go of the notion that I had to play the action parts, I actually started having more fun.

If anything, the action sequences acted like a montage that validated how I played the real meat and potatoes of the game: the management part. Between missions, you’re responsible for selecting a squad of three Pokemon for the next level, making sure that they’re equipped with the right power-up gems, and cooking up the right mix of ingredients to attract new or stronger Pokemon to your fold.

Each level has a combined power level recommendation, letting you know whether your trio is strong enough to take it on. That score can vary, as each level provides a strength bonus to Pokemon of specific types. For example, if the level provides a bonus for electric-type Pokemon, your Pikachu will be uncharacteristically stronger there. Ideally, you have a strong trio for every type, but that’s going to take a lot of expeditions and lots of cooking to get to that place. In the meantime, assemble the best team you can with the Pokemon you have.

When it comes to managing each individual Pokemon, they have all of the basic things you would expect. They level up with use, have multiple special attacks that can be changed over time, and possess the same type advantages that they would in the main series. What makes them different here is the socket system, which allows you to plug in gems that boost their attack power, health gauge, or other property that will aide them in battle. Making sure that your Pokemon have the right gems can go a long way towards ensuring that they hit hard enough or survive long enough to get to the end of any given level.

When it comes to recruiting, you start with a pot to throw all of your ingredients in. After a certain number of expeditions played, your food will be finished and the Pokemon will come to eat at your base. At that point, you can now add them to your squad. Sort of like the recipes in The Legend of Zelda: Breath of the Wild, you’re free to experiment and discover certain combinations of food that will attract specific types of Pokemon. At times, you’ll be at the mercy of whatever you have handy, but you can still get some good Pokemon with a clever mix or good luck. I made an all-blue mix and got a Dratini out of it. Can’t wait to evolve it into a Dragonite someday!

Once I let go of seeing this as an action RPG and saw it more as a Pokemon management sim, it really clicked. No longer worried about having control over the action, I greatly enjoyed prepping my team for success instead. There are players that won’t be able to let that disconnect go, or players who simply can’t get into the management aspects of this game, but I’ve found myself addicted to building out a solid fighting force of blocky Pokemon.