Mario Tennis on the Nintendo 64 has proven to be a very difficult act to follow. Released in 2000, Nintendo found the sweet spot between simulation and arcade action that made that game a master-class title. To this day, if you play any of the Mario Tennis games released after this one in “Classic” or “Simple” mode, you’re essentially playing the same game that was conceived almost 20 years ago.

Later installments of the franchise would try really hard to make meaningful additions to its seemingly-iron-clad formula with little luck. Mario Power Tennis on the Gamecube undermined the skill-based action of the original with silly power shots and even sillier courts that were so cluttered with crap that it was hard to discern what was even happening. As for Mario Tennis: Ultra Smash – besides being an overall lackluster product – also failed to build on the core formula, as it simply made standard power shots more powerful through jumping and added a mega mushroom that essentially gave you power shots all the time.

It may have taken almost two decades to get here, but Nintendo has finally found a way to make Mario Tennis better.

At its core, this is still the same Mario Tennis game you knew and love from the Nintendo 64. It still has the same core shot types, shot charging, and character attributes from previous games. For example, Mario continues to be an all-around tennis player, while Yoshi excels with speed and Bowser is a slow but heavy-hitter. If you’ve ever played a game in this series before, you’ll come to grips with the gist of this one immediately. If “Classic” or “Simple” tennis is what you want, you’ll still get that here.

Going into this, I thought I wouldn’t enjoy anything beyond its “original” mode. However, the game’s default settings include some interesting new additions to the base gameplay that truly take this entry to the next level. Core to the new mechanics is an energy meter. On offense, when your opponent leaves a shot hanging in the air, you can spend 1/3 of your gauge to perform a Zone Shot. The camera flips into a first-person perspective, allowing you to aim a powerful strike wherever you want on the court. As a defender, these shots are really hard to stop, and require very strict timing in order to successfully counter them. If you miss, it’s an easy point for your opposition. If you block the shot too early or too late, you cause damage to your racket, which is a new mechanic to the game.

You can spend all of your meter on a Special Shot, which is essentially the same as a Zone Shot, but with an even stricter penalty for poorly-timed defense. Block too early or too late and the shot will break your racket in one hit! Two broken rackets and your opponent automatically wins the game, regardless of what the score is. 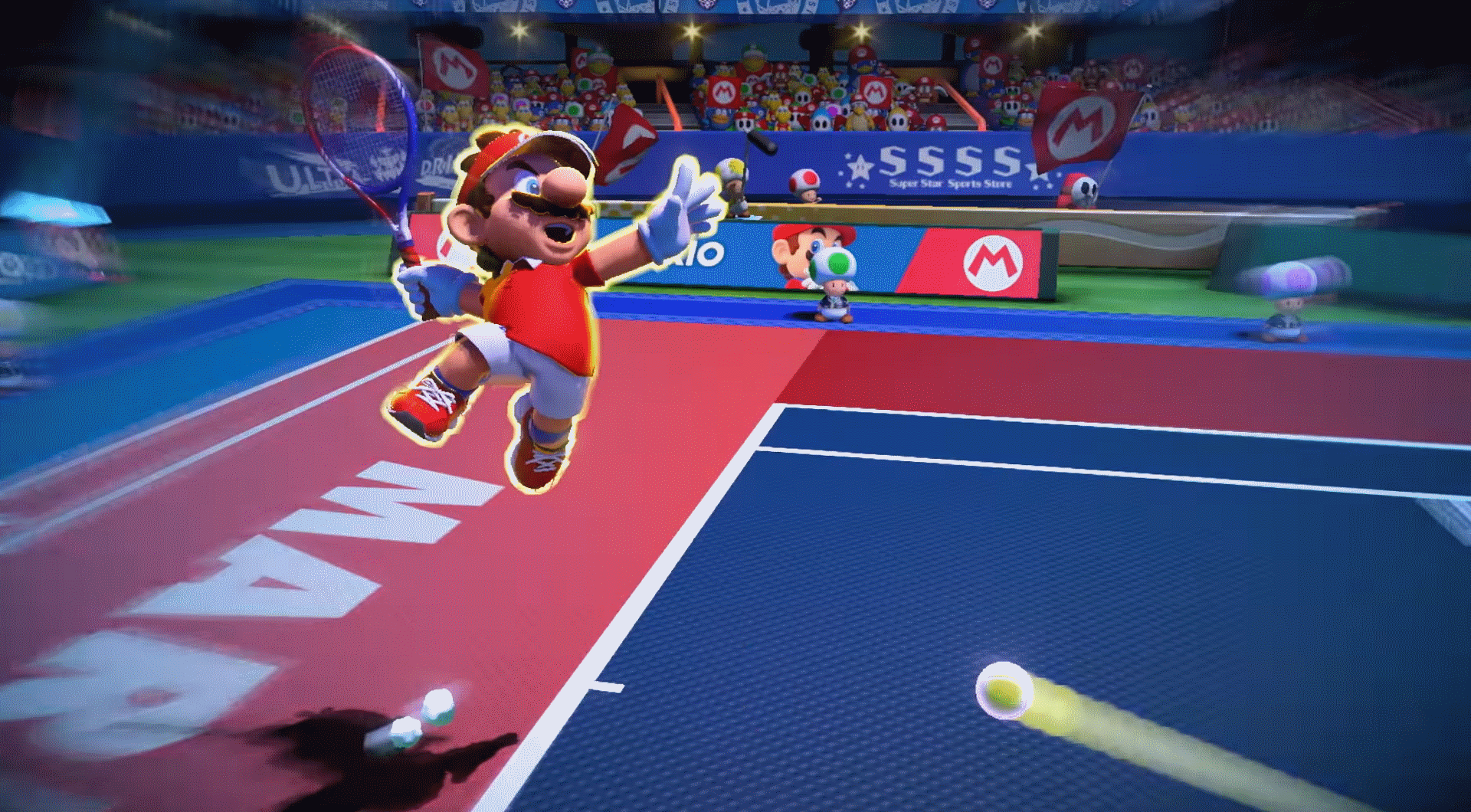 On the other side of the net, you can use that same meter for defensive options. By holding the R-trigger, you activate Zone Speed, allowing you to activate what is essentially bullet time, slowing the world down while you move at normal speed. This let’s you track down shots that would be out of reach otherwise. You also have access to a trick shot, a fancy shot that gives you a lot of meter, but it’s difficult to time and is very space-dependent.

When you put it all together, it almost feels like they’ve added a layer of depth that is more commonly found in a fighting game. Beyond the dexterity and mental gymnastics that regularly occurs in a tennis game, you now have a new and more involved level of resource management that governs your usage of special moves, along with strict timing requirements for trick shots and blocked shots. Unlike past Mario Tennis games, where Nintendo has pushed it closers towards Mario Kart and Mario Party in terms of randomness, Nintendo has gone in the other direction by making this a deeper and more complex sports game.

These additions are certainly for the better. It makes for matches that are even more engaging than before, as you constantly need to weigh the pros and cons of using your meter in any given situation. Want to use it now for a powerful Zone Shot? Scoring the point now may cause you to be short on meter with the game on the line and your opponent’s shot is too far to track down. Want to put the match away with a crushing Special Shot? The odds are in your favour, but it could backfire horribly with a perfectly-timed block from your opponent. Falling behind on the score card by a seemingly insurmountable deficit? Maybe it’s time switch your strategy by going for the racket-breaking knockout instead.

Having that extra depth marks the first time that Nintendo has made a positive change to the core formula. It really caught me by surprise the direction they took with it, and it’s more surprising that it works so well. For the first time in my history with the franchise, I would rather play the game with these new features than with the stripped down “Classic” mode because these upgrades are true game-changers that this series has sorely lacked.

For players who want a dash of chaos, there are a few courts that find a good balance of silly without overly compromising the action. One ghost house themed court features two floating mirrors by the net, which transport the ball from one place to another Portal-style. Another one is a winter course that features Shy Guys and other creatures running across the court. Some will even hit the ball to the other side for you. I think this one is a bit much, but it’s certainly not as chaotic as the courts found in the Gamecube game. My favourite of the bunch is the one on the pirate ship, as a mast is prominently placed right in the middle of the net. This one seemingly-subtle change changes the dynamics of the match in a meaningful way without resorting to more extreme silliness.

Nintendo got the gameplay right. But what about the modes? Players who were miffed by the lack of content in Ultra Smash will be somewhat appeased by the Aces package. When playing alone, the ability to play a tournament against the CPU finally returns. You also get to play through a story mode that features a world map, cutscenes, and levels that use tennis mechanics in very different ways. It’s like playing a myriad of tennis-adjacent activities, sort of like the mini games in Mario Power Tennis. Given the fact that these are given a lot of context for their existence – as goofy as it may be – and that these are strung together in quick succession as party of a story, it makes them a lot more enjoyable to experience than the optional side games in older titles in the series. 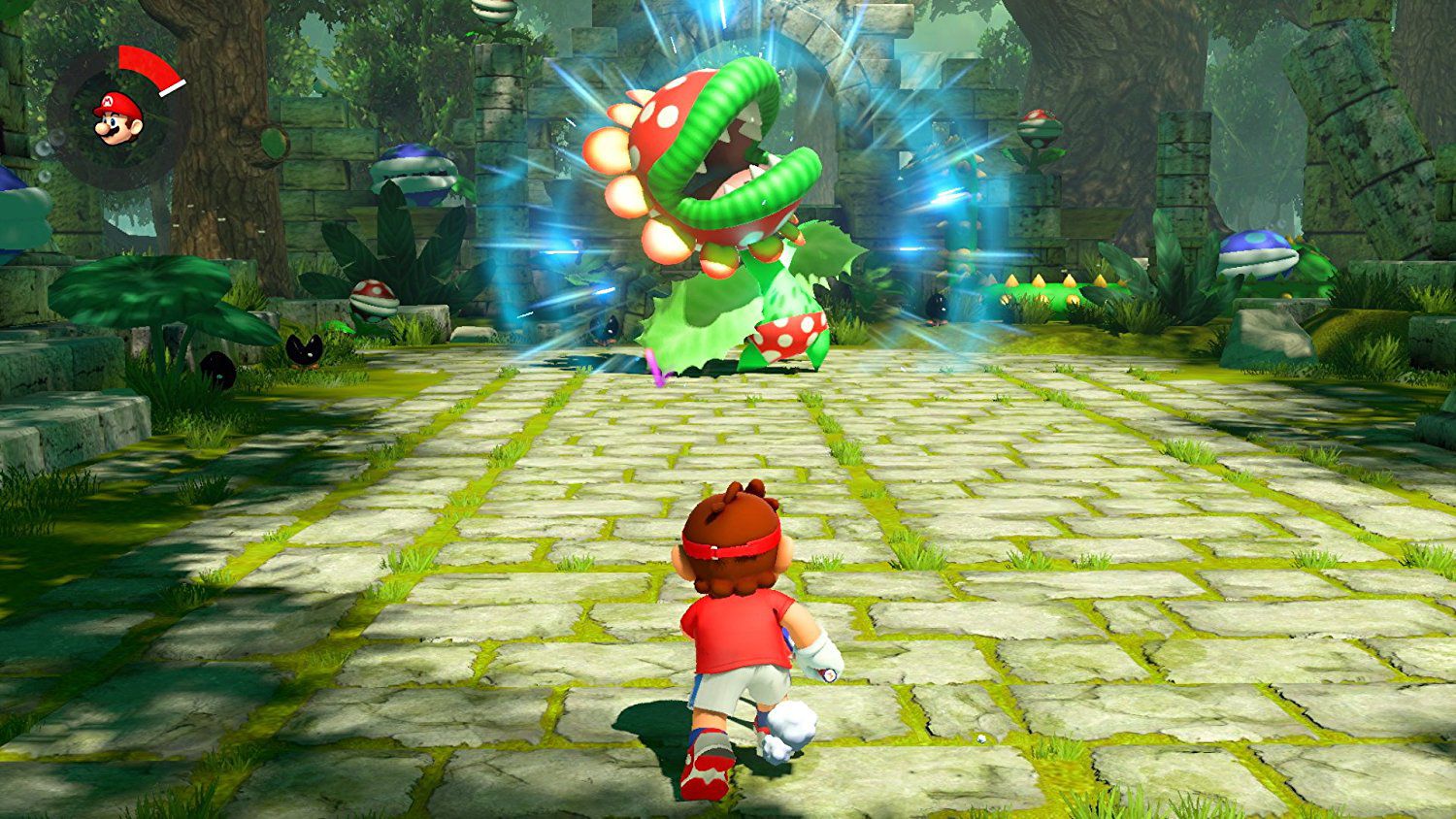 As a means of providing something beyond a series of standard-issue tennis matches, I really enjoy the level of effort Nintendo went through to make the Adventure mode feel like something bigger than tennis. In particular, the way in which the game uses its mechanics to create boss fights is awesome. That said, I do have some sizable criticisms of it. This game’s single player experience was clearly marketed to look like the sports RPG that the awesome Game Boy game was. Yes, this game technically has RPG elements, you have no control over how Mario levels up, and its impact on the game is superficial at best. A quick retry option would also be nice, as having to back out of and reenter each failed challenge is excruciating. Particularly painful is the campaign’s length, clocking in at a little more than four hours, partially padded by the fact that it gets incredibly difficult towards the end.

Online play features singles and doubles matches. You’ll probably spend most of your time playing in the tournament mode, where you’ll participate in an asynchronous multiplayer tournament in hopes of climbing the ladder and winning the championship trophy. It’s a nice touch that can keep players motivated. Online stability seemed like a real concern for me during the beta, but Nintendo seems to have squashed most of the connection issues.

It’s a pretty solid suite of online options, though I can’t overlook one glaring omission from the experience. For some reason, Nintendo didn’t allow for players to create a party with a friend so that they can play doubles online against another team. This would have gotten a ton of mileage from me, as my brother and I would have loved to have taken on the world together. Maybe it arrives in a future update, but for now, it’s absence hurts.

Mario Tennis Aces takes the core gameplay to exciting new heights. Having the special meter, special shots, and timing-dependent defensive options scratches the same itch that a fighting game would for me. Because of this, I see this game having the potential to grip players tighter than any Mario Tennis game before it. However, if competing online isn’t your cup of tea, the thin single player offering isn’t going to be enough to appease you. Depending on where your priorities lie, this is may be a must-get if you like competitive multiplayer games, or a hard pass if you’re in the market for a meaty single player experience.