I missed Lumines in its 2004 heyday. While I have since grown up to embrace a platform-agnostic lifestyle, this game came out during a time when I was a fierce Nintendo loyalist and wanted nothing to do with anything associated with the PlayStation brand. So much so, that I actually got a PSP for free and sold it a few days later before even opening the box. Despite seeming to be a game right up my alley, this was caught squarely in the crosshairs of my overzealous fandom.

Fast forward to 2018 and Lumines finally makes its way to a Nintendo console, among other platforms to receive Lumines Remastered. Not to say that I wouldn’t have played it on something else, but the Switch seems like a great place to play this specific game due to its pick-up-and play nature and how well it could work as a portable experience. Does this blast from the past still shine in modern times?

This is a puzzle game that doesn’t fall too far from the Tetris tree. Players are tasked with rotating and dropping square blocks down a well; actions that should be immediately comprehended if you’ve ever played an iota of the iconic puzzler. Unlike Tetris, your goal is to clear blocks by creating four-block squares of matching colours.  They don’t just disappear though, as the timeline that is in sync with the music wipes away any completed blocks from the screen. It does take a minute to wrap your head around creating squares or rectangles with the pieces at hand, and I’m pretty sure I’m still far from being a Lumines master. But once you get enough of a handle on things to make a decent amount of progress, it’s an enjoyable exercise to try and keep your blocks in order without spilling over the top.

The core game mechanics are solid, but it’s the combination of gameplay and presentation that really pushes Lumines over the top. From flashy backgrounds, to vibrant blocks, to the pulsing EDM soundtrack throughout, everything about the game conspires to put you in a trance-like state where you’re completely absorbed in the action. In particular, stage 1 of the game’s main mode always gets me in the right head space with the song “Shinin'” pumping through my headphones.

You will hear that song a lot, as you have to beat the lengthy Challenge mode in one sitting in order to unlock much of the game’s music and background skins. As much as I enjoy playing this game, it’s a lengthy and difficult process to overcome. After a number of days of play, I still haven’t unlocked every song and I don’t know if I ever will. I’m currently at level 85 out of 100, so I’m close, but it’s such a mountain to climb.

Call me a scrub all you want, but I really wish that content wasn’t gated in this manner without any alternative, because this game may fall off my rotation much quicker due to me not having any sort of means of accessing the other skins or music. Heck, I would even be okay with paying extra to unlock all of the songs out of the gate so that I can mix them up however I want in the Skin mode. Keep the challenge mode and leaderboard intact, just give me another way of unlocking those skins for casual play.

There are other ways to play that also gate key content away and aren’t particularly enjoyable. In Time Attack, score as many points as you can within a set amount of time. With Puzzle mode, you’re tasked with creating specific shapes out of the blocks, but I found this to be way too difficult. Mission mode is okay, as it tasks you with completing specific objectives, such as clearing the well with only one block. Versus mode is the most disappointing of the bunch, as it pits players in a tug-of-war like game where players fight for extra width on their well. The problem is that as soon as someone expands the well for themselves, it’s really hard for the attacked player to come back from this, effectively making this a first attack wins sort of game. 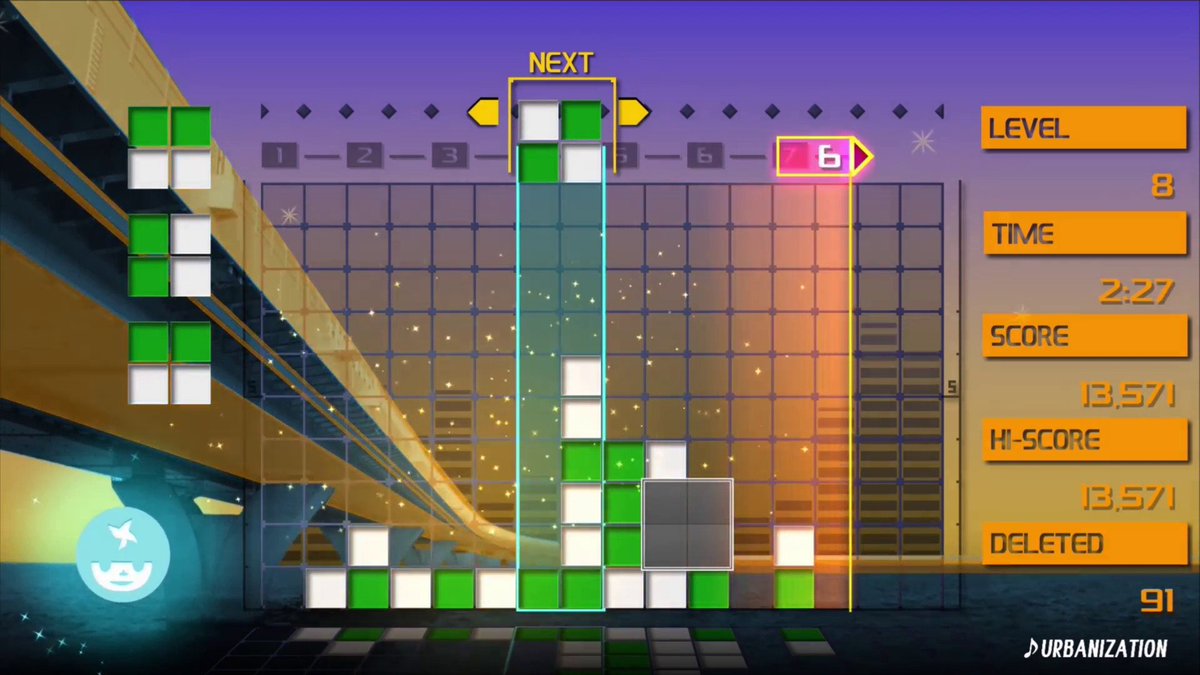 Lumines is an uneven experience. Its secondary modes are a bust and I cannot stand how the game gates off its content from all but the most skilled players. However, that main Challenge mode and Skin edit shine the game in its best light as a euphoric and hypnotic puzzler that feels more like a party than an intense brain exercise. It could have been so much more, but I will probably play the hell out of the core modes that I really like.