Before I began streaming, I dismissed the Elgato Stream Deck as an expensive gimmick. At its regular price of $150 US/$220 CAD, you are paying a lot for what simply appears to be nothing more than 15 buttons. Once I started getting into streaming, I felt that I could manage my stream just fine with a keyboard and mouse.

With many hours of streaming under my belt now, I’ve begun to understand where a device like the Stream Deck could come in handy. I use my keyboard for hot keys, but I can’t unbind them from their default functions. For example, I want to type in a new numerical value to adjust the volume of the game. All of a sudden, my scene quickly flashes and ends on the wrong view because those same numbers are mapped to my different scenes. I’ve streamed for far too long with a muted mic because I didn’t realize it was muted. For a production-heavy show like Boss Rush, where I’m the host and the producer, I spend too much time not engaging with the crew or the audience because I’m too busy looking at the screen trying to cue up the next video or manage all of the visual elements that go into our game shows.

At this point in my streaming career, I knew that I needed more buttons. There are alternatives to the pricey Stream Deck, such as phone apps that offer similar functionality, or DIY solutions that can be done for much cheaper. You can even buy a cheaper Stream Deck featuring only six buttons. But when the original 15-button model went on sale as part of Black Friday, I scooped one up immediately.

Taking the unit out of the box caught me by surprise. I was not expecting it to be as small as it was. The Stream Deck looks big in pictures, but its dimensions make it roughly the ballpark of a large smartphone. Great for tight spaces, but I personally wish it was a bit bigger. In particular, I would have liked to have had access to larger buttons.

What I also didn’t realize in the pictures was that the stand it sits on is not directly attached to the device. Instead, the stand is a separate piece. It can be adjusted to numerous angles, but it does this with a back panel that holds it up at its higher angles, while cut-out notches towards the top of the stand keep it up at lower angles. It’s a bit fiddly, but it works.

What they may lack a bit in size, it makes up for in function. These are nice physical buttons that have a good feel when you press them in. There’s also a notch on the centre button, making it easy to figure out where you are and where you need to go without having to look at the unit itself. When you do look at it, you’re treated to mini screens within each button. This allows you to change the look and function of each button depending on your circumstances, something that most DIY solutions won’t allow you to easily do.

Using the Stream Deck software to configure the device, I got it working very quickly. Simply log into any streaming/social media accounts, then drag-and-drop the functions you need onto the device and you’re good to go. Currently, the Stream Deck has support for a plethora of services, from Twitch, to OBS, Streamlabs OBS, Mixed, YouTube, Twitter, X-Split, and even a few other services I’ve never heard of. Within minutes, I could flip between scenes, mute and unmute audio sources, clear the chat, place markers for highlights, create clips, monitor my view counts and more from the Stream Deck.

The buttons are also smart enough to know how you’d want to use them. For example, when mapping different scenes to buttons, if scene one is activated, switching to scene two will automatically turn off scene one as well. If you want to use it as a sound board, you can fine-tune the behaviour of the button, depending on if you want a follow-up button press to restart the sound, play the sound overtop of the first one, or loop around after the first activation ends.

Beyond the standard functions that are offered, you can even map a button to perform multiple tasks. Sometimes at the end of my stream, I like to pull up the website and talk through some of my latest posts while scrolling down. By using a multi-function button, I can press one button to switch the OBS scene to my computer, while also opening up a browser and going directly to my site. Neat!

I did run into one notable limitation, though it’s not necessarily the Stream Deck’s fault. I wanted to run a video clip with audio baked into it. However, due to the way that OBS handles video sources and video delay, it doesn’t work as intended. Trying to delay my video to match the delay on my gameplay, pressing the button will instantly show the video frozen on frame one, not running until the delay quota has been met. I wish OBS would trigger the video only when the delay was up and not the instant the button was hit, but this is more of an OBS problem than an Stream Deck one.

The Elgato Stream Deck comes with 15 programmable buttons, but I only need one. Can’t wait to use this on my stream! 🎉 🎉 #twitch #elgato #streamdeck #elgatostream #supportsmallstreamers #sorrynotsorry

I thought that 15 buttons would be enough, but I quickly realized that I could fill it up even more. Should this be the case, the Stream Deck also allows you to create folder buttons, allowing you to branch out as needed. You can even create separate profiles with completely different configurations. So far, I have one profile for regular streaming, and another for Boss Rush. Being able to use these 15 keys for much more than 15 functions makes this such a powerful tool.

Having used it now, it’s drastically improved my workflow. I can manage so much of the stream with minimal breaks in the action. In particular, not having to stop playing, pick up the mouse, look for the thing I need to click on, and clicking on it is basically gone from my flow, as I just hit the button and carry on. Hosting Boss Rush is much better with the Stream Deck, as I can achieve the desired effects of toggling scores or flipping between b-roll much more smoothly.

As a streamer, do you need a stream deck? Even on sale, it is an expensive piece of kit if you’re thinking reductively in terms of paying a premium on 15 physical buttons. But now that I have one in my possession, I don’t want to stream without it. Having all of this functionality at my fingertips allows me to manage more of the stream with less effort, giving me more time to engage with my audience and play games. 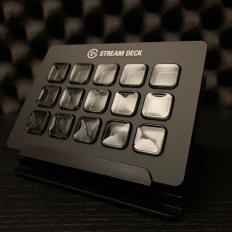