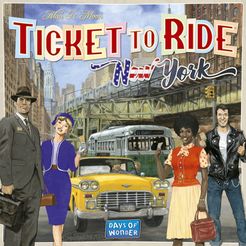 The original Ticket to Ride is my all-time favourite board game. I really enjoy that game’s balance of accessibility and strategic depth. Over the course of play, there’s a lot of interesting decisions to make, from determining which colour cards to draw, to knowing when to place your trains on the board, to finding alternate paths to your destination when a jerk has blocked your path. In spite of my love for that first game, I haven’t really ventured much beyond it. I have the 1910 Expansion, and I’ve played Ticket to Ride: Europe a few times, but that’s it. Based on what I’ve seen of the other standalone games and expansions, there wasn’t enough new or unique there for me to venture beyond my comfort zone.

Enter Ticket to Ride: New York. The latest entry in the series is also the smallest. With a playing field that only covers the south side of Manhattan, this iteration of the game is meant to deliver the thrills of the original in a package that can be played in about 15 minutes. I love the idea of having a quick version of Ticket to Ride to play, but does anything get lost in the distillation process?

As with other games in the Ticket to Ride series, your goal is to get the most points. You’ll do so by claiming routes on the board by spending your Transportation tickets equal to the colour of the route and the number of rectangles required. For example, to claim the route between Chelsea and Soho, you must play a set of four pink cards or any combination of pink and rainbow cards. At the end of the game, you’ll also get bonus points for completing Destination Tickets, which reward players for creating a continuous trail of your taxis between two specific destinations on the map. Be careful though, as failing to complete them will deduct an equivalent amount of points from your final score. New to this game are locations designated as Tourist Attractions, which grant you one additional point for each designated city you’re connected to.

For anyone that has played a Ticket to Ride game before, the learning curve is virtually non-existent. Save for the new Tourist Attractions mechanic, everything else carries over. You still have the same important decisions to make with regards to which Transportation cards to draw, what routes to claim, determining when the right time to claim them is, and knowing if/when to draw more Destination Tickets. It all works as advertised, as our games routinely wrapped up in under 15 minutes.

What it gains in brevity, it loses in satisfaction. This game is certainly competent and enjoyable in its own right, but you only get a handful of moves before the game rockets to a close. I enjoy the process of building longer routes that take many turns to complete, as well as the tension that comes with blocking and rerouting. With this game, it feels like it ends before anything of consequence got accomplished.

The concept of making a bite-sized Ticket to Ride makes a whole lot of sense. However, despite pretty much retaining everything that makes the original great, playing Ticket to Ride: New York mainly made me more hungry for the real deal. Shrunken down to just a handful of turns, I think the core gameplay doesn’t have the runway to really shine. If you really must have a quick-playing Ticket to Ride, or if you need an introductory-level version of the game, this will do. Personally, in a situation with only a few minutes to spare, I’d rather play another game that provides a more satisfactory experience in the same amount of time, or even the digital versions of Ticket to Ride that cram the main game in a time-frame on par with Ticket to Ride: New York without sacrificing its depth.