During my formative years, the Woodbine Centre mall just outside of Toronto was the most magical place on Earth. Featuring an amusement park inside, I loved playing in the ball pit, sliding down the tall slide that starts three stories up, and riding on the park’s iconic carousel. Had to ride the horses that bobbed up and down, of course.

As a kid, my mom took night school courses in the area for a few years. Because the timing didn’t work out for my dad, brother, and I to go home, we hung out at Woodbine Centre instead. My brother was peak age for the amusement park, while we both got a kick out of playing at the arcade. This arcade is where I got my first taste of such classics as Street Fighter II, Mortal Kombat, and NBA Jam.

Since those days of making regular visits, I’ve seldom returned. I’m rarely in the area and haven’t had a reason to go back. That is, until the mall’s Baskin Robbins got converted to Scoops Ahoy for a limited time. Re-themed to match the look of the ice cream shop prominently featured in Stranger Things 3, my wife and I made a visit to the mall that was a pivotal piece of my childhood.

Entering from the food court side of the mall, the memories came flooding back. Across the way was the same Bulk Barn that we would visit for snacks. We always got the off-brand Funyuns and I still enjoy eating those to this day. The old movie theatre is still there, but it’s now occupied by a different company that specializes in playing slightly older movies at bargain basement prices. If my experience with their other theatres is any indication, they probably haven’t updated since it was originally built decades ago. 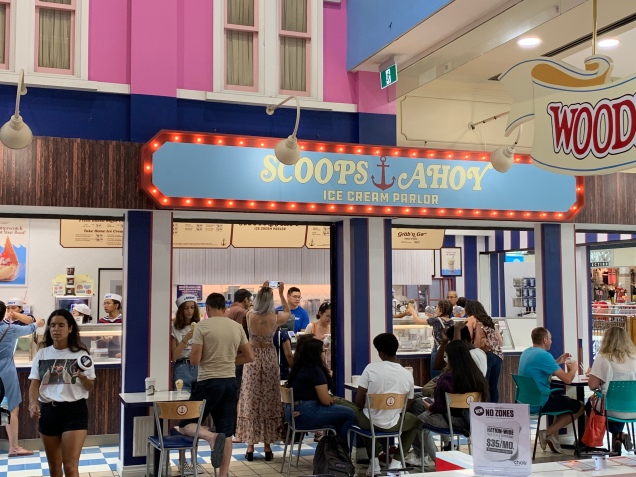 Located at the east entrance of the Fantasy Fair where it’s always been, the Baskin Robbins was decked out with signage from the show. All of the staff were also wearing Scoops Ahoy uniforms. They even changed a few names of the flavours to be themed after the show! Steff and I shared a banana split with all three Stranger Things flavours: Upside Down Pralines, U.S.S. Butterscotch, and Eleven’s Heaven. Delicious!

We happened to show up at just the right time. Only three people were in front of us when we got there, but the line had grown by the dozen as we collected our ice cream. Before we left the mall, the line was stretched all the way to the other side of the amusement park! 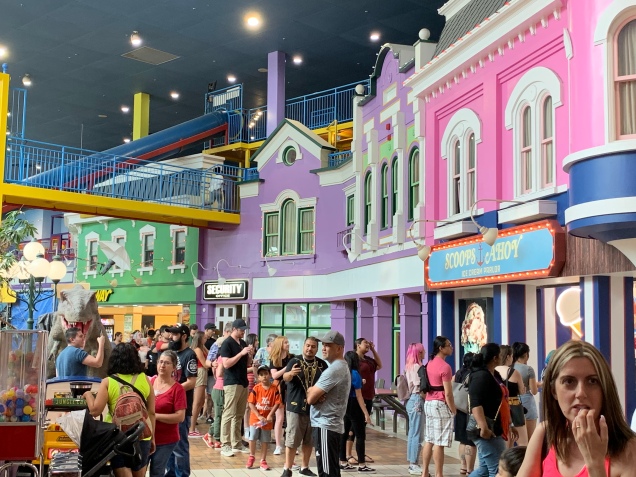 Being in that amusement park gave me goosebumps. Some of the old attractions were replaced with new ones, and they’ve since added a weird smattering of animatronic dinosaurs everywhere, but much of what made this place special to me was still there. The ferris wheel. The airplane ride that went around the park. The tall slide that doesn’t look nearly as daunting now as it did when I was little. The multi-story playground jungle gym thing. I felt like a kid again. 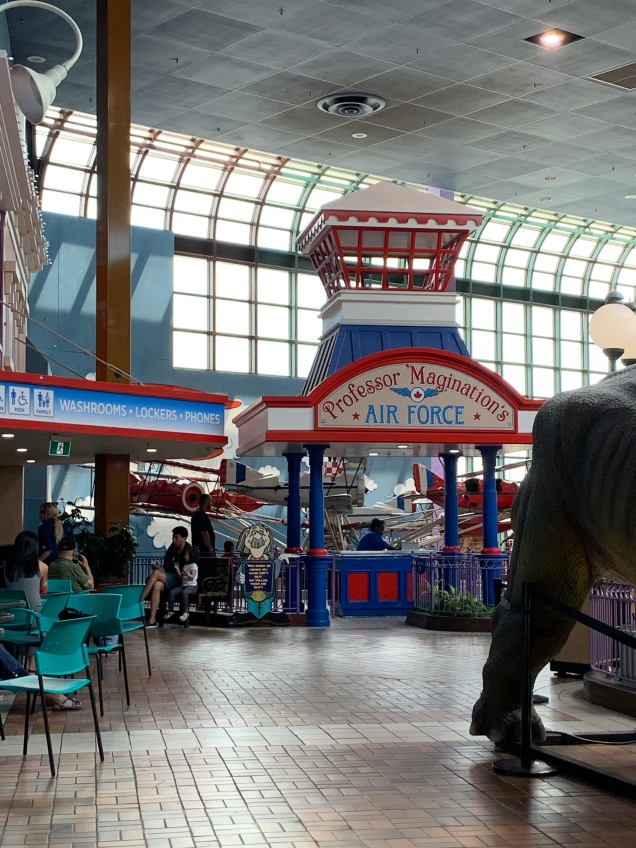 As an added bonus, the arcade returned to its original location! For a time, it moved to the lower level of the mall into a larger spot before closing completely. I was taken aback to not only see an arcade return at all,  but to see it back where it once was. Memories of discovering Street Fighter II, the X-Men beat-em-up arcade game, Whack-A-Mole, and more came flooding back.

The game choices are definitely different these days. Pretty much everything in there was of the ticket redemption variety. I’m always up for a few rounds of Skee-Ball and Pop-a-Shot basketball, but the days of fighters, racing games, and beat-em-ups are long gone. I’m just glad that this still exists in some form.

Visiting the Fantasy Fair part of Woodbine was a wonderful blast from the past. Wandering through the rest of the mall though was a sad wake-up call for what’s happened in these last few decades. Most major retailers have abandoned the mall for greener pastures. These days, it’s mostly occupied by smaller retailers whose appeal is niche at best. While the park is in mostly great shape, the rest of the building hasn’t seen the same love and care. Had it not been for the park, this mall would be a ghost town.

Maybe there’s a light at the end of the tunnel. Strewn about the mall were renders for renewal plans. The proposal outlined the addition of a new building with performance stages, condos nearby, and the addition of some major stores. Wherever things go, it was cool to be able to revisit one of the major backdrops of my childhood in a state that’s largely intact. I hope the kids of today and tomorrow can continue to enjoy it just as I did decades earlier.

One thought on “A Return to Woodbine Centre”