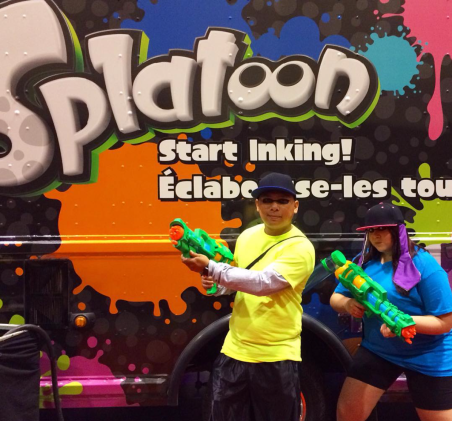 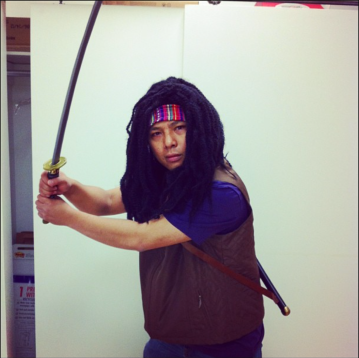 Slicing her way through countless zombies, Michonne is one of my favourite characters from The Walking Dead. I think the only time I actually wore this getup was to work on Halloween, which is a shame. It was one of my better looks and it would have been fun to wear this at a convention. 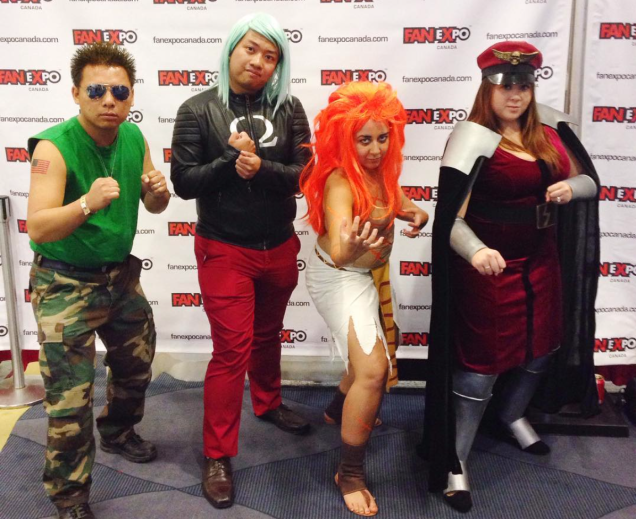 My family had the idea of dressing up as Street Fighter characters for Fan Expo a few years back. While the others in the group wore wigs, did a ton of sewing, and even made armour, I did as little work as possible. Bought some army pants, a tank top, glasses, and some yellow hair gel and called it a day. Oh! I did print my own American flag tattoos and stuck them on my arms, so that’s something. I’m okay being the extra wheel in this group, especially when their amazing costumes more than make up for me.

Not long after the game came out, my wife and I cosplayed as Inklings from Splatoon. I loved the game and thought the costume would be fairly straightforward to make. Even so, my wife still repainted all of the water guns, did my makeup, and made herself tentacles to complete the look. I feel like we were ahead of our time, as no one else dressed as Inklings to Fan Expo that year and barely anyone recognized us. We’ve seen others dress as Inklings at every Fan Expo since. Every year, our group goes to the Silver Snail Halloween party. It’s the biggest geek party in the city and while it’s not mandatory to dress up, you would stand out like a sore thumb if you didn’t. It’s the only time of the year where I really feel the pressure to dress up as something.

Last year, our group had the idea of doing a group costume based on the Pandemic board game. Three of us dressed as characters, while my sister-in-law dressed up as the board. It was cool to see the reactions from those who recognized us! 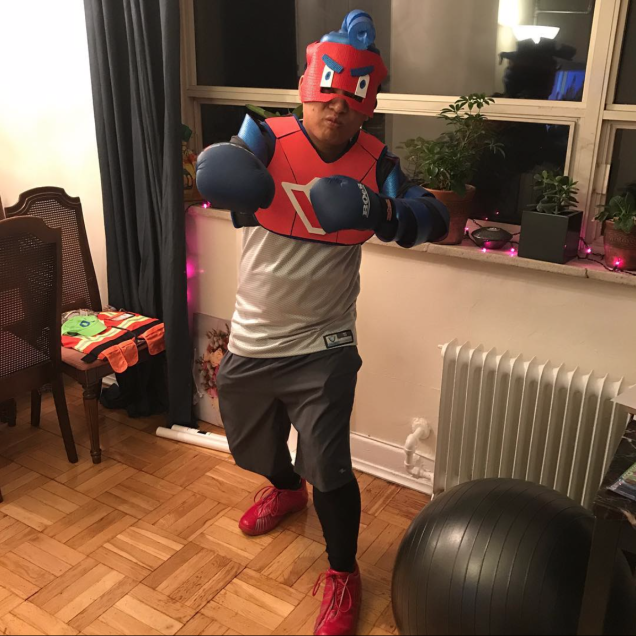 During the year of its release, I was obsessed with ARMS. To this day, it’s still my most played Nintendo Switch game. For the Silver Snail Halloween party, Steff took on the challenge of turning me into my main character.

Using the material from children’s foam mats, she formed the mask and coil arms. The springy hair is actually a pool noodle. For the chest plate, she used hockey padding as a base and covered it with a different form of foam. This one is my most adventurous look yet! 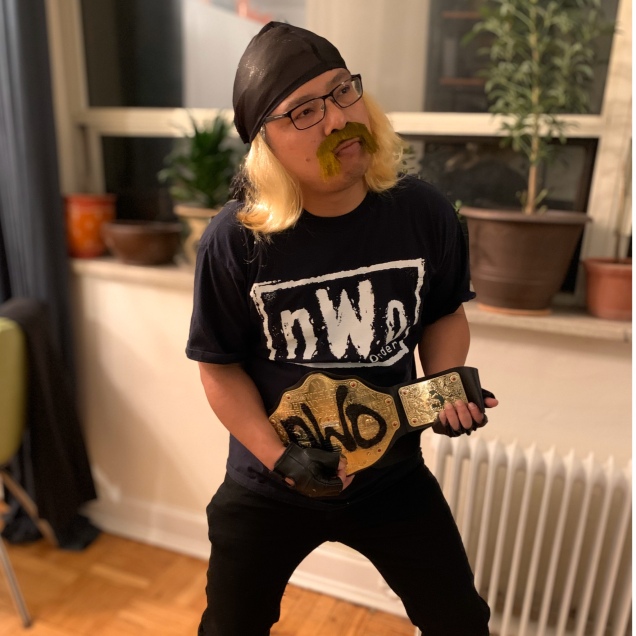 In 2019, our group decided to dress up as wrestlers for the Silver Snail Halloween party. My first choice was to dress up as Rey Mysterio, but that would require me to wear a mask and I don’t have an alternative to my glasses at the moment. Instead, I went with Hollywood Hulk Hogan.

Having bought the shirt at Wrestlemania X8 decades ago and the children’s replica belt relatively recently, the only things I really needed were the wig and moustache. We bought a cheap blonde wig from the dollar store and Steff coached me on how to cut it the appropriate length.

The moustache was a challenge. Didn’t realize this until I was in the market, but costume moustaches are made almost exclusively as brunette. What we ended up doing was spraying it down with a thick layer of hair colour. For my purposes, it looked good enough and I got a lot of compliments at the party. However, the hair colour would sprinkle into my mouth every time I took a sip from my drink. Gross!

The world of cosplay continues to grow and I have all the admiration in the world for those that engage with it on any level. It’s a lot of work and you deserve the applause for putting in the effort for creating these costumes. Keep up the great work!

P.S. – Thank you Steff for helping me with all of these cosplays. Couldn’t have done any of this without you! ❤