Spread out the drop cloth. Cut the Bristol board. Brush the dust off the cans. It’s spray painting season!

Here’s a recap of everything that went down during Steff and I’s first session of the year.

Last year, we cut all of our stencils by hand. Though it gave us a better understanding of how to make and use them, the painstaking process was incredibly slow, stressful on the hands, and cutting mistakes were inevitable. 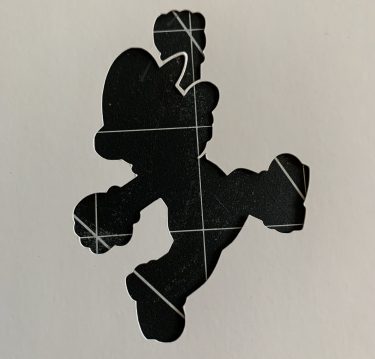 This time, we were armed with Steff’s Cricut. With this device, we were able to machine cut our own stencils. Having this handy was an absolute godsend, though there’s definitely a learning curve to using it. Nevertheless, the ability to get precision stencils at any size saved us so much time and opened up a lot of creative opportunities.

With the added stencils also came a change in workflow. Many of the designs I had in mind required the layering of different elements after previous sections have dried. Since we don’t have a blowtorch for fast drying, it required me to switch between projects as I finished each layer. Kind of weird to switch mindsets and gloves between jobs, but it worked for the best.

Alright, let’s look at the art!

First up is a spacey tribute to Rosalina from Super Mario Galaxy. Her and Luma’s silhouettes are filled with the galaxy and stars while resting on an all-white canvas.

Overall, I like the effect of space being contained within a silhouette. This was a solid first attempt. Definitely some things I would clean up when I do this again, such as throwing down an extra layer of white paint after the first layer dries for a more solid white. Inside the silhouette, I would put in comets or more pronounced stars. Relative to the canvas, I also think the stencil I used was a bit small. Compensated this time by simply cutting the ends off for a canvas that was more square in shape.

Miles Morales dives into the Spider-Verse in this next painting. Taking my own twist on its promotional art, I substituted all of the pieces with components that I could make work as a spray paint piece.

This one was easily the most difficult of today’s bunch. It required multiple steps to apply. Trickiest part of the piece was weighing down the logo, as it featured many small and scattershot pieces.

Proud of being able to see this one through to fruition. It more or less came out as planned. However, I look at it now and see a whole bunch of stuff I would adjust if I ever did it again. Would attempt to layer in more buildings. With at least one middle shade of blue between the light and dark, I could have made the transition smoother. Also feel like the sky needs a bit more drama. Stars wouldn’t make sense, but maybe clouds hovering just above the city would give the sky more life.

Mario leaps across the galaxy in this “negative” art. Most of the time, space is depicted with black paint. Taking a cue from Skech Art, I tried my hand at inverting the colours. Then I had the idea of taking it in a slightly different direction by depicting Mario in red, jumping between two planets.

Speaking of which, the planet on the right was created using a different technique. Instead of ripping paint off with a plastic bag, I dragged the paint back and forth with a flat tool. This technique is mostly used to create water, but it works for planets too.

Of my efforts today, I think this one featured the cleanest execution. I actually messed up the first layer of white, as too much black seeped through and I badly messed up my attempts at comets. Cleaned that up with a second layer of white. Nevertheless, would love to go back and add sparkling stars or comets if I came back to this idea.

Last but not least was a wholly-original piece. Starting with two planets, I spiced things up with my first decent attempt at glistening stars and streaking comets. Was originally aiming for the teal to spiral outward, but I learned the hard way that this particular can blasts with a very wide radius. No matter, it’s simply part of the galaxy now.

Unfortunately, I don’t have video for the creation of this one. My phone died after letting it run for over an hour while filming the other pieces. Note to self: have extra batteries around for extended painting sessions!

Though this final piece doesn’t feature any known quantities, this was the most fun to make. Having the freedom to make anything I want is incredibly liberating. Making use of fundamental spray paint art skills is also something worth practicing, which these types of paintings really force the artist to use. With so much more to learn, these types of paintings are probably the most important for my overall growth.

And with that, we close up shop on another spray painting session. Always have a blast going through the process of throwing colour around. Felt like I learned a lot going into our next session. The final paintings weren’t too bad either!