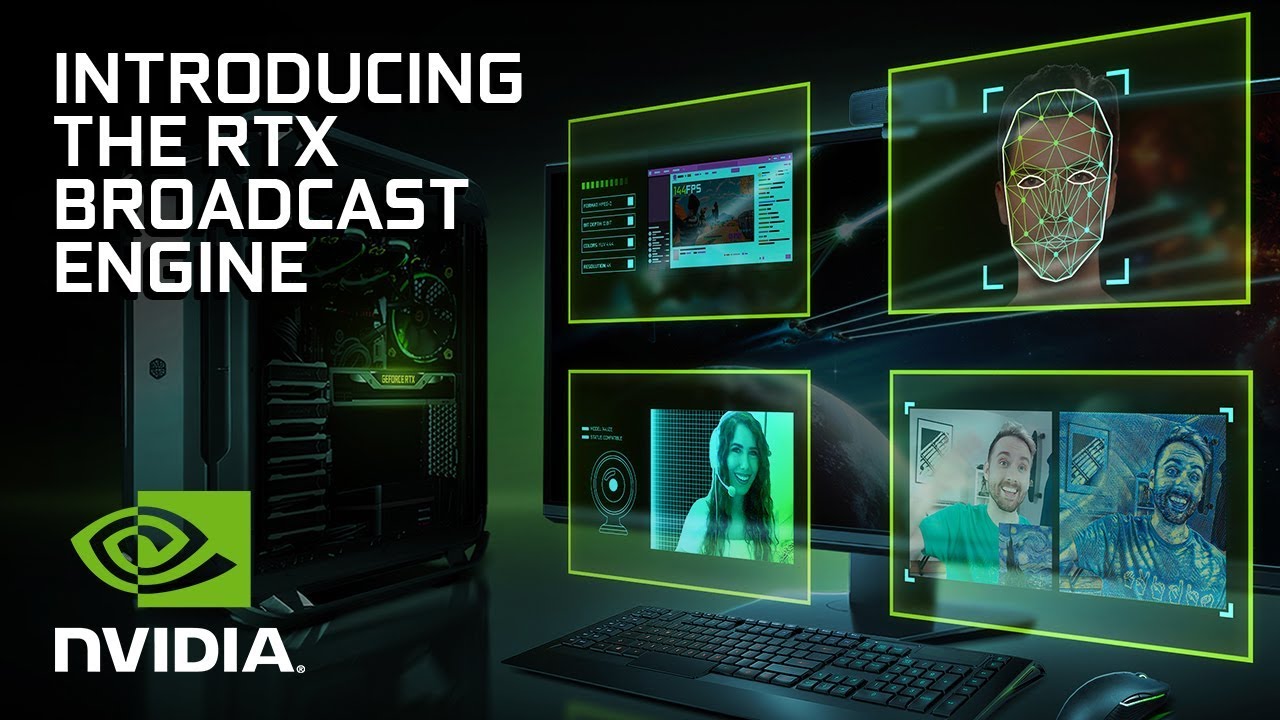 NVIDIA made its first major strides into the streaming world with their new NVENC encoder. Incorporated as part of every graphics card above the 1660, their new NVENC provides streamers with a video encoder that is on par with x264 while freeing up the CPU to handle other tasks.

More recently, they’ve rolled out NVIDIA Broadcast. This free suite of tools aim to improve the presentation of your stream. Let’s try them out!

First up is the noise removal tool. This features uses AI to remove background noise while trying its best to maintain the quality of your voice. You can adjust how severe the noise removal effect is, but it essentially removes anything that isn’t a human voice.

If you’re not listening too closely, the effect can be pretty remarkable. The sound of air conditioning or a fan is removed with little impact to the voice quality. In certain cases, this is going to be a great way to minimize certain environmental noises that are hard to control otherwise.

However, the effect is not perfect. It’s inevitable that the sounds being removed share at least some of the same frequencies as your voice. Any time the filter kicks in, your voice will deteriorate. Depending on the severity of the sound, it can sound like you’ve got bad reception on your phone at its worst. For most cases, it shouldn’t be that bad and is worth the trade.

The more glaring issue with it for me is the fact that there’s no way to make exceptions for noises other than your voice. If you want to give yourself a round of applause for a hard-earned victory, the clap will be muted. This is a much bigger deal-breaker for me than any of the potential distortion it adds to my voice. With seemingly no easy way to make exceptions for certain sounds, this limitation is going to be too much for me. If that isn’t a concern for you, then it’s a much easier tool to incorporate into your setup.

Your camera also gets a power-up through NVIDIA Broadcast Engine. This suite of tools is listed as still being in beta and I think it shows. All of the effects triggered flickering in my camera at resolutions higher than 720p. Considering the fact that I’m running off of a brand new 3060Ti and this software was made to support the last generation of cards, I wouldn’t blame the hardware here. Maybe it’ll stabilize on higher resolutions once it’s out of beta. If you don’t suffer the same fate as me or are willing to drop the resolution on your camera, you should have a much better experience.

In spite of the flickering, I tried out all of the effects available. My favourite of the bunch is background blur, With the flip of a switch, the software keeps you in the forefront and blurs everything behind you. The effect works very well, only showing its flaws around the edges of my feathery hair and the unusually-focused gap between my head and my headphones. When my head lines up a specific way with the wall, elements within that gap are in focus while everything around it is out of focus. This is a great way to simulate the bokeh look of a DSLR camera with just a webcam.

Another tantalizing feature of this package is its background removal tech. Without a green screen, you can instantly remove the background. Is it as good as having a green screen? No. Artifacts will appear between you and the background to varying degrees, though it’s less noticeable when you superimpose your camera feed overtop of your gameplay or a background image. Still, there are enough imperfections that make it more of a substitute until you can get an actual green screen.

Lastly, you can turn on face tracking. With this on, the camera will keep your face centered, even as you move your head around. Though it technically kept my face in the middle as best it could, the camera movement felt a bit too jerky for me. The effect is neat, though it doesn’t seem all that practical for most streamers, considering the fact that most of us are just sitting in a chair. Some may have good uses for it, but it won’t be one I turn on again.

NVIDIA Broadcast is an interesting suite of software with a lot of potential. Providing streamers and video content creators with free software-based solutions for noise removal, background removal, and background blur is awesome! It all works to varying degrees of success, but there’s probably an effect or two that could be beneficial to your setup right now. With more polish, I think this tech could really help streamers achieve the look of a high-end stream without dropping hundreds – if not thousands – on high-end gear.

2 thoughts on “Testing the Features Within NVIDIA Broadcast, Including Noise Removal, Background Removal, and More”