Introduced in 2021, Venusaur V and Blastoise V ushered in a new era of theme decks. Most notably, these decks come with a bit of extra firepower thanks to the inclusion of V versions each deck’s featured Pokemon.

For the sake of forward compatibility (and the nifty V Battle card), V Battle decks are generally the way to go these days. Let’s take a look at what the Venusaur V deck has to offer!

Punching Power (For a Price)

Relative to other theme decks, the Venusaur V Battle deck comes with a number of hard-hitting Pokemon. The star of the deck can hit for a whopping 190 damage with a single attack, but most of this squad can hit for 100 or more with ease. For newcomers in particular, you may enjoy this deck for its relatively-straightforward gameplan of hitting hard.

However, that extra oomph comes at a price. Gogoat, Yanmega, and Venusaur all take damage after performing their big moves. Play too recklessly and you’ll make it easy for your opponent to knock out your Pokemon. When using this deck, your goal is to find the right balance of big damage, pacing, and healing so that you don’t run your team into the ground prematurely.

The key feature that makes V Battle decks different from the old theme decks is that they feature one V Battle card. Besides featuring gorgeous art that covers the whole card, Pokemon V are stronger variations of regular Pokemon with higher health and more powerful moves.

Most notably, many Pokemon V are fully-evolved Pokemon that can be played immediately. In this deck, Venusaur V can be placed on the field without having to evolve up from Bulbasaur. When you do, you get access to its high HP and its Double-Edge move that can knock out most Pokemon in one hit!

While it’s an absolute stud on the field, you only get one Venusaur V with your deck. There’s a chance that you won’t see it at all during some matches, which you should always keep in mind. You can use the two Great Balls or the one Sonia card to try and retrieve it from your deck earlier. If that doesn’t work, be prepared to fight without it!

Your Pokemon will be absorbing a lot of damage because of their moves that inflict damage on themselves. This is where Eldegoss comes in. It has the remarkable ability to fully heal a Pokemon on the bench. Be careful though, as Eldegoss’ low health make it very easy to knock out.

Odds are, you’re only getting one heal out of an Eldegoss before it gets knocked out or you have to retreat. That said, you may sacrifice Eldegoss if it allows you to heal an extra attacker. Manage your use of Eldegoss wisely!

Another new benefit to the modern V Battle decks is that they’re also sold in sets of two. Perfect for you and a friend to battle right away!

Not only are you getting two different decks in one box, but you’re also getting extra trainer cards that can greatly improve your play. Within the Venusaur vs. Blastoise set, it contains two copies of Boss’s Orders, Quick Ball, Marnie, and Turbo Patch. Not only do these trainer cards work well within the context of these decks, these cards are often used in tournament play. If you ever decide to get serious, these trainer cards are a great addition to almost any competitive deck! 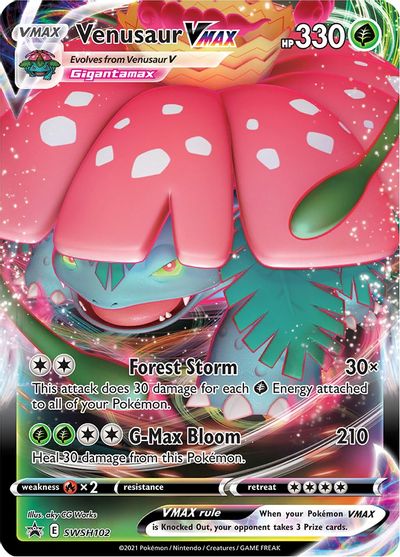 Already have the deck and want to make it even stronger? Here are a few suggestions of cards to swap in! Don’t forget that decks require you to have exactly 60 cards, so you’ll need to make room for these!