Do you remember the Gears of War Mad World commercial? Up until that point, the game had been presented as a ‘dudebro’ shooter with all of the emphasis on its revolutionary cover mechanics and stop-and-pop shooting. Then the Mad World commercial hit television and it presented the game as something more emotionally charged. Unfortunately, it was all for the sake of advertising, as none of that Mad World feeling ended up making it into the game. Gears of War 2 sort of tried to capture that, but those few attempts came off as unintentionally funny.

While Marcus and company weave through bombastic firefights and kill all varieties of alien lifeforms in Gears of War 3, it actually manages to capture that Mad World feeling in a number of spots. In one particular case, it literally captures it, but that’s going way into spoiler-territory. Let’s back up and talk about this new, improved and somewhat more emotional Gears of War 3. 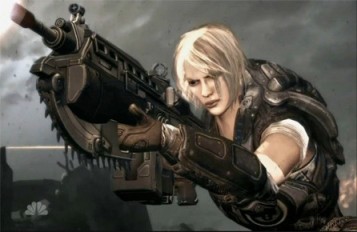 In Gears of War 2, humankind found itself in a pretty crappy situation. They had no choice but to sink the last landmass on Sera that was populated by humans. When you catch up to Delta Squad in Gears of War 3, they’ve been at sea for a few years, with little to no hope of saving anything.

This context that starts the game thankfully carries throughout for the most part, which was one of the biggest downfalls of the first two games. You could easily play through the first two games and not know any of the story beats or character motivations. In Gears of War 3, the context behind all of the shooting is much more prevalent. At its best, you really empathize with the characters in a particular situation, which adds more emotional weight to key situations. The game isn’t always on-point when it tries to make you feel a certain way, but it goes a lot farther in doing so than most people would expect.

Having written four full paragraphs without talking about the action of Gears of War 3 says a lot about how much improved the story and context are. With that said, the core of Gears of War 3 still lies in its rock solid shooting mechanics. While this game may not be as revolutionary as the first, or trying as hard to be as bombastic as the second, Gears of War 3 as a mechanical experience is the most polished of the bunch. Every firefight feels a tad different from the last, and they’re all very fun to take part in. The first two games I felt stumbled really hard when they tried to veer away from the core mechanics with deviations such as driving levels, but thankfully Gears of War 3 doesn’t suffer from the same pitfall. Instead, many of the non-traditional sequences involve the use of a mech-like suits that are a lot of fun to use.

If you’re going into Gears of War 3 for the multiplayer, you’re in for a treat as well. I’m not much of a deathmatch or Beast Mode fan, but for those who are interested in those modes are sure to have a blast. My cup of tea is Horde mode, which has seen a nice upgrade. This mode has since been beefed up with tower defense elements, where you gain money as you kill enemies and can spend it on ammo, barriers, turrets and other defensive mechanisms to keep you in the fight.

Gears of War 3 stands head-and-shoulders above its predecessors, and is one of the best games available this year thanks to a surprisingly strong single player campaign and multiplayer upgrades in the right places. This game may not re-invent the wheel, but this is a finely-tuned product on all fronts, which hasn’t been the case with the previous two installments. It remains to be seen whether or not this stays in my mix of game of the year 2011 games, but there’s no question that Gears of War 3 is flat-out awesome.

One thought on “Gears of War 3 Review”