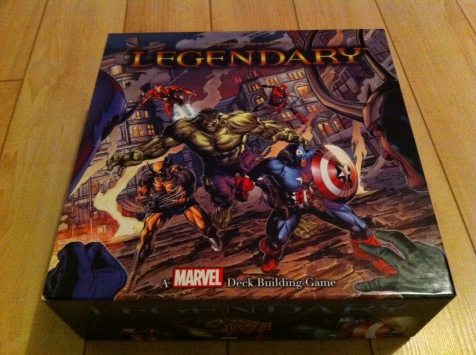 Having played a lot of Dominion and DC Comics Deck-Building Game, my chief complaint between them is that they squander an opportunity to create a story that comes to life as it’s played. I love them both for their wildly addictive gameplay mechanics, but I never feel like I’m doing anything beyond managing the numbers. In particular, DC’s game has the opportunity to leverage its great cast of characters to tell a cool in-game story, but they’re mostly just used as art over top of the standard deck-building formula. Worse yet, its moment-to-moment story beats don’t fully make sense within the overall premise of the game. For instance, why can players use villains to take out super villains? From a strictly mechanical point of view, it doesn’t matter. However, it does break the immersion and take away from what could have been a more authentic DC Comics experience.

With a slew of unique mechanics specifically designed to convey the struggle between good and evil, Legendary: A Marvel Deck-Building Game aims to bring the Marvel universe to life in a way that its deck-building counterparts don’t. This added context however comes at a cost of a steeper learning curve. Is the trade worth it?

As with any game in this genre, you build up your deck with stronger cards and earn victory points by defeating enemies. At the end of the game, the player with the most victory points wins. However, that’s where things get interesting. Unlike Dominion and DC Comics Deck-Building Game, your enemies constantly fight back in Legendary. Villains and henchmen work their way through the city from right to left as turns are played. However, if they escape the city, they knock out one of your heroes from HQ and could potentially trigger other adverse effects on all players. Certain enemies also inflict effects on the game when they first appear or when you fight them. For instance, if you choose to fight a Sentinel, you must knock out one of your heroes in the process, as it’s hard not to suffer a casualty against a giant robot.

The most diabolical gameplay mechanic is the Mastermind. Your end goal is to take out the Mastermind in order for players to secure a team victory. However, their ability to negatively impact the game is unparalleled. When Master Strike cards are drawn, they can inflict a damaging blow to all players. Worse yet, they can end the game if they manage to complete their scheme. In that case, the Mastermind wins and all players lose.

Wrapping your head around the additional systems to make all of that work is a bit daunting. Admittedly, it took me about two hours to set the game up for the first time. The cards require a lot of sorting out of the box, which is problematic when the manual doesn’t do a good job of teaching you how to do that. I tried going to the Upper Deck website to find the how-to-play videos that were advertised in the manual only to find a PDF version of the same manual. After growing frustrated with the game’s lack of support, I eventually found the answers I was looking for through YouTube.

Now that I know what I’m doing, getting the game started only takes a matter of minutes. Better yet, the myriad of variables you can control before you start lends itself well to a variety of different gameplay possibilities. As the action is happening, all of the systems at play create a constant battle between the players and the board, which is really fun to experience and in-line with the overall narrative of the game. Also, while the game can get pretty selfish early on, you will eventually have to play as a team to take out the Mastermind if they get too close to completing their scheme. Having that duality between competition and teamwork adds yet another layer of tension to an already nuanced game.

Villains are a bright spot for Legendary, though I wish that the heroes were given the same level of care. You choose five heroes from a set of 15 to partake in the fight. Each hero’s set of cards play around a specific mechanic that relates to their character. For instance, The Hulk specializes in brute strength, so most of his cards provide a ton of attack points. Because of this, it can feel like you only have a handful of hero options available, which can be a bit limiting. Personally, I much prefer how DC handled their hero pile, where everyone is available. If you’re feeling creative, you can mix your Marvel cards in that fashion to spice things up. As it stands, the heroes are mostly straightforward, which isn’t necessarily a bad thing. They just don’t elevate the game in the same way as their adversaries.

Legendary‘s added complexity ultimately proved to be well worth its steeper learning curve. Because its mechanics do such a great job of creating a nuanced tale of heroes versus villains, I found myself to be deeply immersed in its moment-to-moment action. Newcomers to the genre or those looking for a more pick-up-and-play deck-builder should try DC’s game first. After that, definitely give this one a shot.