Set in The Resistance universe, Coup is a game about rival families fighting their way to political power through mostly dastardly means. What this means for you and up to five of your friends is that you’ll partake in a fast and nasty game where lying is greatly encouraged.

Each player gets a handful of coins and two influence cards. Throughout the game, coins can be collected and eventually spent on a coup, which means that the player of your choice is forced to discard one of their influence cards. The game keeps going until only one person has influence cards still in play.

The nuance comes from the influence cards. After you take a look at what you have, you keep these face down on the table. The ones in your hand dictate the special abilities you have free access to.  For instance, a coup usually costs seven coins, but if you have an assassin card, you can dispatch of one of your rivals for only three. However, just because you don’t have an assassin card doesn’t mean you can’t go for one anyway. If no one calls you out on your bluff, play carries on as usual. But if you do get caught lying, you must discard one of your influence cards. In the event that someone calls your bluff and you were actually telling the truth, your opposition is then forced to discard one of their influence cards while you get to replace the one that was called out with a new one from the influence pile. 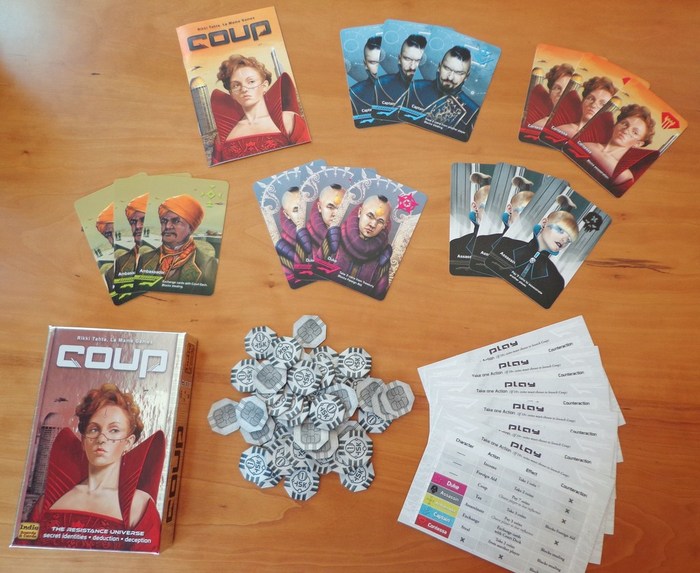 This dynamic makes for a game where every move is tense and scrutinized with great detail. Are they bluffing? Are you going to lie this turn? Or are you going to play it straight? Your approach can change from move-to-move as you see fit. I’m not a very good liar in real life, but I really like playing this game. It’s easy to learn, moves quickly and makes for a great catalyst for player interaction and trash talking.

The box says that Coup can be played with 2-6 players, though it works best on the higher end of its player count. Having played a bunch of one-on-one battles with Steff, these games are often over within a matter of seconds with no real time for an in-game narrative to develop. I’m generally not a fan of player elimination as a mechanic, though this game moves so quickly even with six players that getting eliminated doesn’t make for a lot of down time.

Some people won’t be comfortable with how mean and devious Coup can be. But for those looking to cross that line for a shot at winning, this makes for a great addition to your collection. Heck, you can even try to score an even greater victory by telling the truth throughout.