More Cash ‘N More Guns is the aptly named expansion for Cash ‘N Guns. No one will claim false advertising on this one, as it certainly contains more cash and more guns. Is this expansion just more of the same? Or does it add to the base game in meaningful ways?

Let’s start with the guns, as they immediately grab your eye as soon as you open the box. Unlike the base game, there’s one tiny gun, two small guns, and one big revolver. The tiny gun is tied to a surprise card that allows you to use it and your main gun to shoot two people with one bullet. One it inflicts damage, you have to put the small gun away.

The other two guns are tied to character powers and are kept for the duration of the game. With the twin guns, you can aim at two people, but one gun is a fake, marked by a notch in the handle. After the second countdown, you’ll reveal which gun is which. The big gun is going to make a lot of people back down, as one shot from the big gun inflicts two wounds.

Going into this, I thought that these would throw off the balance of the game. While it does have its benefits, players wielding the special guns inherently become bigger targets. With more people gunning for you, the harder it is to stay in the game. Overall, it’s a fair trade.

Just because you don’t luck out with a special gun doesn’t mean you’ll be empty handed. A new deck of Surprise cards give players a one-time benefit they can use at any point. These range from being able to apply your shot after backing out of a gunfight, force all players to aim at one person, or even steal the Godfather title before they can tell someone to change their shot. These are very powerful benefits, though the one-shot nature of them balances things out. It’s a great addition to the game. 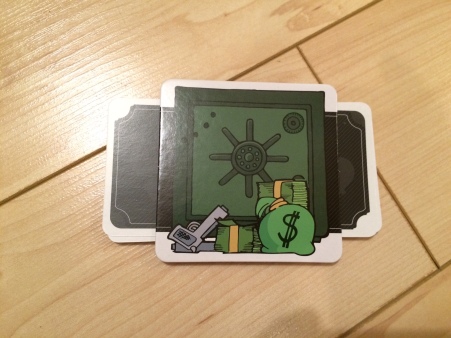 The most interesting addition to the game is the safe. When players are sharing the loot, the Godfather can opt to open the safe and take two cards from the top of the pile. One card he keeps, while the other goes to his right hand (the person sitting on their right hand side). To fill the safe, new bills have been added to the game, including fake paintings, fake diamonds and even fake money. Fake diamonds are worth $0, but add to your diamond total. Fake paintings can add to your painting total, but only if you pay $20,000. Fake money may or may not be counted at the end, depending on the decision made by the final Godfather. All of these changes make it very lucrative for players to fight for that desk. Also, even if you’re not the Godfather, you can sneak into the safe and grab loot with a combination card from the regular loot pile.

Hate to say it, but if you’re in the market for more Cash ‘N Guns, More Cash ‘N More Guns certainly fits the bill. The additions to the game are solid and add an additional layer of depth to this light party game. My only gripe is that despite the extra guns, it doesn’t increase the player count. Still, if you’re in need of spice for your Cash ‘N Guns experience, this is it.