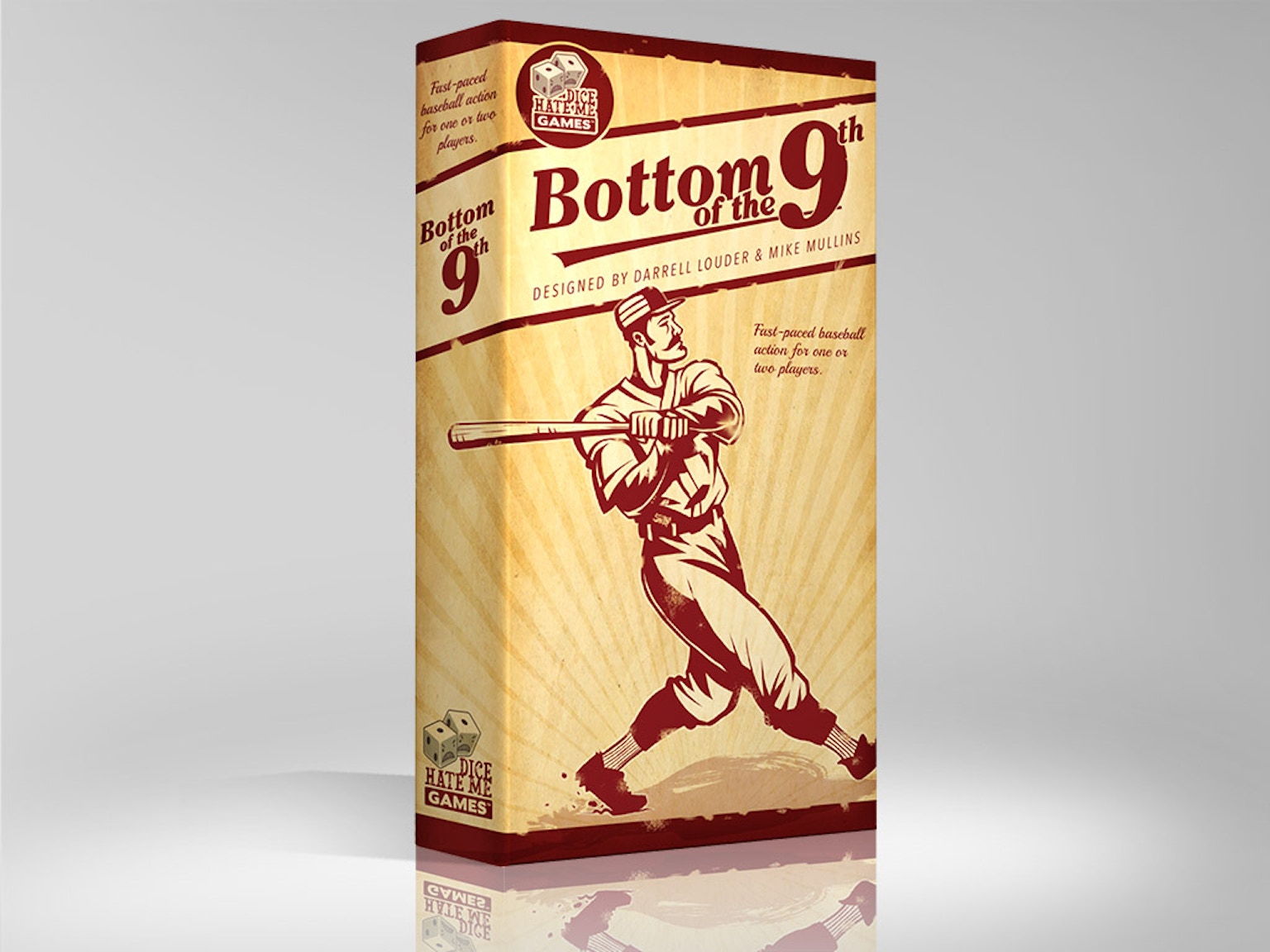 The tension in the stadium is palpable. It’s the end of the game and the score is tied between the scrappy underdogs at bat and the powerhouse squad on defense. If the underdogs can’t score now, their opposition will surely beat them in extra innings. This is the scenario you and one other player will face in Bottom of the 9th. Do you have what it takes to score the winning run or record the final out?

While you can play more than one inning, the main game focuses only on the bottom of the 9th. If the offense scores one or more runs, the offense wins. If the defense can record three outs, they win. Having to only play the one half of the inning makes for a quick game that is done in 20 minutes or less. In the rare case of a lead-off home run, the game can end in under two minutes! It’s very short, but that same scenario could happen in the real thing.

First, each player will pick a side. If you’re the team on offense, you’ll build a lineup of six hitters with the batter cards, making sure that you don’t have two players at the same position. As the defense, you’ll pick one starting pitcher card and a reliever. Each player comes with a unique set of abilities, as well as a trait. I do wish there were a few more pitchers and batters in the box, but there are expansions that can be purchased to round out your lineups.

Then you’ll take your corresponding components and set up the board. Just to the outside of the board, you’ll place the three red markers adjacent to the outs track. Then, using the pitcher’s signature pitch as a guide, place the mini pitch markers on the fatigue board on the 0 row so that it displays their signature pitch.

Play occurs in five phases: Stare-Down, Pitch, Swing, Run and Clean-Up. During the Stare-Down phase, this is where the pitcher determines what part of the plate they want to target, while the hitter guesses where the pitcher is going to throw it. This is done with a pair of pitch tokens that show high, low, away and inside. So for example, a pitcher might choose to throw a pitch high and inside, while the batter might guess that the throw will be low and outside.

Once their choices are made, tokens are revealed simultaneously. For each correct guess by the batter, the batter will take the pitcher’s corresponding tokens. For each missed guess, the pitcher will take the batter’s corresponding tokens. These can be used to trigger abilities such as being able to increase a value or re-roll a die. Having both can put you in a very advantageous situation.

What keeps this boiling down to a random guessing game is the fatigue factor. Each time the picture throws a pitch that corresponds to one or both of their signature pitch directions, that direction moves down one space on the fatigue path. If they throw their signature pitch, both tokens move down a spot. Should one of the tokens reach the bottom, the pitcher can no longer throw in that direction. Worse, if both hit the bottom, they’re stuck with only one place they can throw, making them extremely predictable. You can refresh your pitcher by one unit for each empty base you have between batters, but this won’t help if the bases are loaded. Managing your directions is key as a pitcher.

After the Stare-Down phase, the pitcher throws their pitch. This is done with two dice, one for where it lands and one for the control of the pitch. The control die is a standard D6, while the pitch die has symbols representing a ball, strike, or on the corner. At this point, any sort of tokens, traits or abilities can be used to modify the pitch.

Then, it’s time for the batter to hit. With a standard D6, the number will represent whether they’re able to make contact. If the pitch is a ball, any value equal to or lower than the control value is a ball, though a higher value is a strike. If the pitch is in the strike zone, the only way the hitter can stop it from counting as a strike is by making contact. This is done by the batter rolling a value higher than the control value. Corner pitches are especially tough to hit, as the hitter has to match the exact control value to make contact. Otherwise, it’s a strike. With only three dice, the game manages to create a quick and sensible system for simulating the pitching and hitting experience.

If the hitter makes contact, players will then race to get to first base or record the out. Rolling the D6 dice as fast as they can, the player to roll a 5 or a 6 first wins. Personally, I prefer the variant in the rules where physical speed isn’t a factor.

If hitter makes contact with a natural 6, they crush it. They get to roll their die again, and determine the type of hit based on that second roll. Rolling a 1 or 2 is a normal hit. A 3 or 4 is an automatic single. A 5 is an automatic double. Finally, a 6 is a home run. If the batter is lucky enough to smash one out of the park, the pitcher gets one last shot to scale the wall and snag it back down. If they can roll a 6, the batter is out. Otherwise, it’s gone and the offense wins.

Even though the game is pretty lightweight in terms of complexity, the experience is heavily rooted in the sport of baseball. If you don’t already have a working knowledge of the sport, coming to grips with its mechanisms is going to be a harder hill to climb. Also, without any interest in the sport, this game is going to have a really hard time winning you over.

That’s not necessarily a bad thing, as one of its goals is to be true to the sport. In that way, this game is great. All of the mechanisms make sense within the context of the sport and are enjoyable to engage with. From trying to read what the pitcher will throw, to all of the baseball-specific special abilities that each character has, the integration between the theme and its mechanisms is great. When played with two players who have at least a working knowledge of the sport, it’s a hit (pun intended).

Solo gamers are not left in the dark, as it can be played alone. Scrapping the fatigue tokens for the pitcher, they are instead controlled by a deck of cards featuring the pitch directions. Also, this deck of cards doubles as its fatigue. Managing the basic rules for the pitcher is fine, though the special rules around pitch mitigation I found really confusing. For one, there are inconsistencies between the mitigation card itself and the manual in terms of die values to achieve. Second of all, the instructions for when to modify the pitcher’s pitches aren’t worded clearly enough. Having scanned the rules forum on Board Game Geek and watched a number of solo plays on YouTube, I still don’t know if I have it down.

I don’t think I’ll be playing much of this alone, but with a friend, Bottom of the 9th is a good little board game. It does a great job of capturing the joy of the sport in a quick and compact experience. People who aren’t interested at all with the sport need not apply, but even casual baseball fans will get a kick out of this one.

Buy Bottom of The 9th Now From Amazon.com