The harvest is in and it’s time to celebrate! In Lanterns: The Harvest Festival, players act as artisans, decorating the lake around the castle with colourful lanterns. The player who earns the most honour by the end of the process is declared the winner. This isn’t a process that I’m familiar with in real life, but it does make for a neat and fairly light strategy game that sort of evokes the feelings that come with Ticket to Ride and Carcasonne.

Play primarily revolves around the placement of lake tiles, which feature lanterns on each side. Branching off of the starting tile, players can place their tile beside it in any orientation as long as at least one side is touching another tile. Then, all players will earn lantern tiles based on what lanterns correspond with their side of the table. So for example, if I was sitting on the south end of the table and the tile I just placed had red lanterns on its south-facing end, then I would get a red lantern card. All the other players would get colour cards corresponding to their sides. This is a great way of keeping players involved while making the action faster, as everyone is making forward progress on almost every turn. 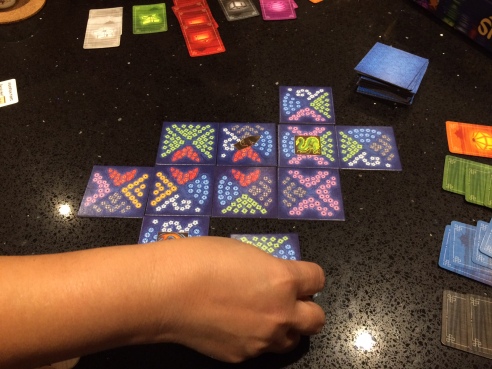 While you can place your tiles in any orientation, there’s a lot of nuance in how you do it. For example, if you match the colours of one of the sides, even if it’s not your corresponding side, you’ll earn an extra lantern card of that colour. Also, if you match colours with a tile that has a platform on it, you’ll earn a favour token, as well as lantern card of the matching colours. Two favour tokens can be traded in to allow you to swap one of your own lantern cards for another in the draw pile of your choice.

Ultimately, you’ll cash in your lantern cards in exchange for dedication tokens which feature point values. As the game progresses, the value of the dedication tokens decreases, so it’s in your best interest to strike early and often. At the end of the game, the player who scores the most dedication points wins. 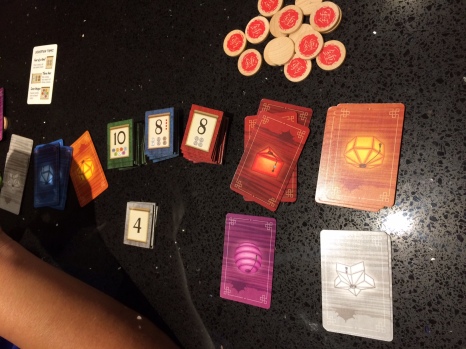 Lanterns has a lot of great things going for it. The layers of options that come with playing your lantern tiles and how you orient them on the lake makes for a myriad of different outcomes that benefit you and the other players at the table in different ways. Ideally, you’ll play the option that earns you the most stuff while leaving other players empty-handed, though the likelihood of everyone benefiting in some form is high. Working through your options and playing the tiles is a great process. By the end of the game, you have a colourful lake that’s nice to look at. While it doesn’t have the same amazement factor that comes with building a city in Carcassonne, the end result is still cool.

The way scoring works is also well done. You can earn points by cashing in one of each kind, three pairs, or four of a kind, all of which have variable values as the game progresses. While it’s alluring to chase the one of each kind tokens, as they have the highest starting point value, it might make more sense to chase the lower point values, as they require less cards to cash in. Over the course of the game, you might get more out of striking lower point-value tokens more often. Also, as play progresses, the one of each kind tokens will decrease in value, which will likely make the other kinds more valuable. 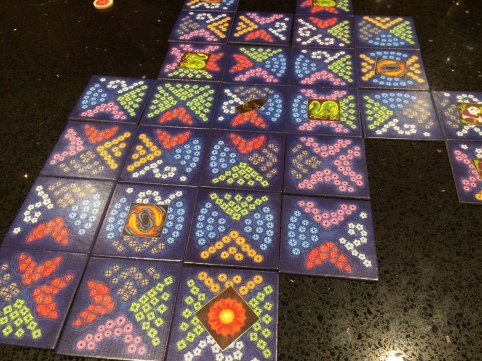 Lanterns: The Harvest Festival is a great light strategy game that’s fairly easy to pick up and quick to play through. It borrows a number of mechanical cues from games like Carcassonne with the tile-laying and Ticket to Ride with the collection and redemption of coloured cards, but does them really. Add the mechanism around earning lantern tiles based on your corresponding sides on top of that, and it all comes together in a fresh and novel way. This game might not be gathering much buzz in the community, but consider this then a hidden gem.