Rushed out the door in 2016 to coincide with Capcom Cup, Street Fighter V was released in an embarrassingly bare-bones state. While I initially praised the game for its great gameplay and detailed graphics, the launch product was woefully lacking in many ways. From a single-player suite that didn’t include a traditional arcade mode, to unstable netcode, to menu items that had “coming soon” messaging as placeholders, the sorry state that the game debuted in negatively impacted sales and public perception in a big way. Had it not gained a foothold as the premier fighting game esport, this game would have fallen off a cliff into obscurity.

Despite the bungled launch, Capcom has continually put in the effort to improve the product. In the summer of 2016, they added a story mode as a free update. The netcode has been stabilized for the most part. They’ve even added 12 more characters as paid DLC to boost the current roster size to 28, with another six on the way. Unlike those incremental fixes and updates, Street Fighter V: Arcade Edition is a sizable step towards the game that this should have been all along.

As per the game’s namesake, the biggest edition to this package is an arcade mode. Capcom could have simply put in a standard ladder of matches leading up to a final boss, but they’ve taken steps to go above and beyond. Instead, there are five different ladders, one for every era of Street Fighter. Within each path, you will have access to a subset of characters relevant to that era, as well as era-specific endings for each character. Because of that, Ryu is going to have five different endings, one for each time period, though others will have less depending on what point in the timeline they appear. With so many different endings to see and special art that is unlockable through the arcade mode, players who were sorely missing single-player content get a meaty treat from this.

The execution of this mode is not perfect though. Unlike more modern arcade campaigns, there aren’t story bits weaved throughout the campaign to add to the sense of progression. You simply move from fight-to-fight, where it culminates in a final battle that feels like all of the other ones. In cases such as the Street Fighter I path, where the obvious choice for a final boss isn’t in the roster yet, it substitutes them with another character with no pomp or circumstance behind it. While the game does feature hundreds of endings, each ending in arcade mode is just a single image with some text. All that said, having the ability to play against the computer in a ladder format is a huge jump from the half-hearted character story mode and the abysmal survival mode before it. On top of that, the extra touches that Capcom put in do just enough to make it feel like you have access to a Coles Notes retelling of the series to-date.

Arcade is not the only mode added to the game. A new Extra Battle mode is in place, giving players a regularly updated set of challenges that can give players hefty rewards such as large sums of Fight Money or even exclusive costumes. While I like the opportunity to earn cool stuff, I’m not a fan of how it’s currently implemented. For one, you have to spend your Fight Money in order to play these challenges. Personally, I’d rather exchange it for tangible goods rather than gamble it on challenges, but that’s a matter of preference. What irks me right now is the implementation of multi-part challenges. During times like this, it’s not entirely clear how you access the other parts. I spent double the amount of Fight Money than I needed to because I paid to play a challenge I had already beaten, thinking that playing it again would give me the reward for part two. There should at the very least be some sort of note to say that I’ll be spending Fight Money again on a challenge I’ve already completed before it lets me do it again.

Mechanically, the game has also gotten some much needed cleanup. A new round of balance changes has been implemented in order to better optimize the game for competitive play. More notably, every character will now have the choice between one of two unique V-Triggers. For example, Ryu’s V-Trigger I gave him stronger and faster fireballs. With his new V-Trigger II, he gains access to a parry and counter-hit combination that puts his opponents in a crumple state, giving you ample time to land a devastating combo. Having the choice between one of two different V-Triggers not only gives players more choice in how they approach a fight, but it also tips the scales of power a bit in cases where certain characters were hampered by having only one bad V-Trigger. Balancing a fighting game is always a work in progress, but the tuning of the game now is certainly closer to an ideal state than it ever has been. 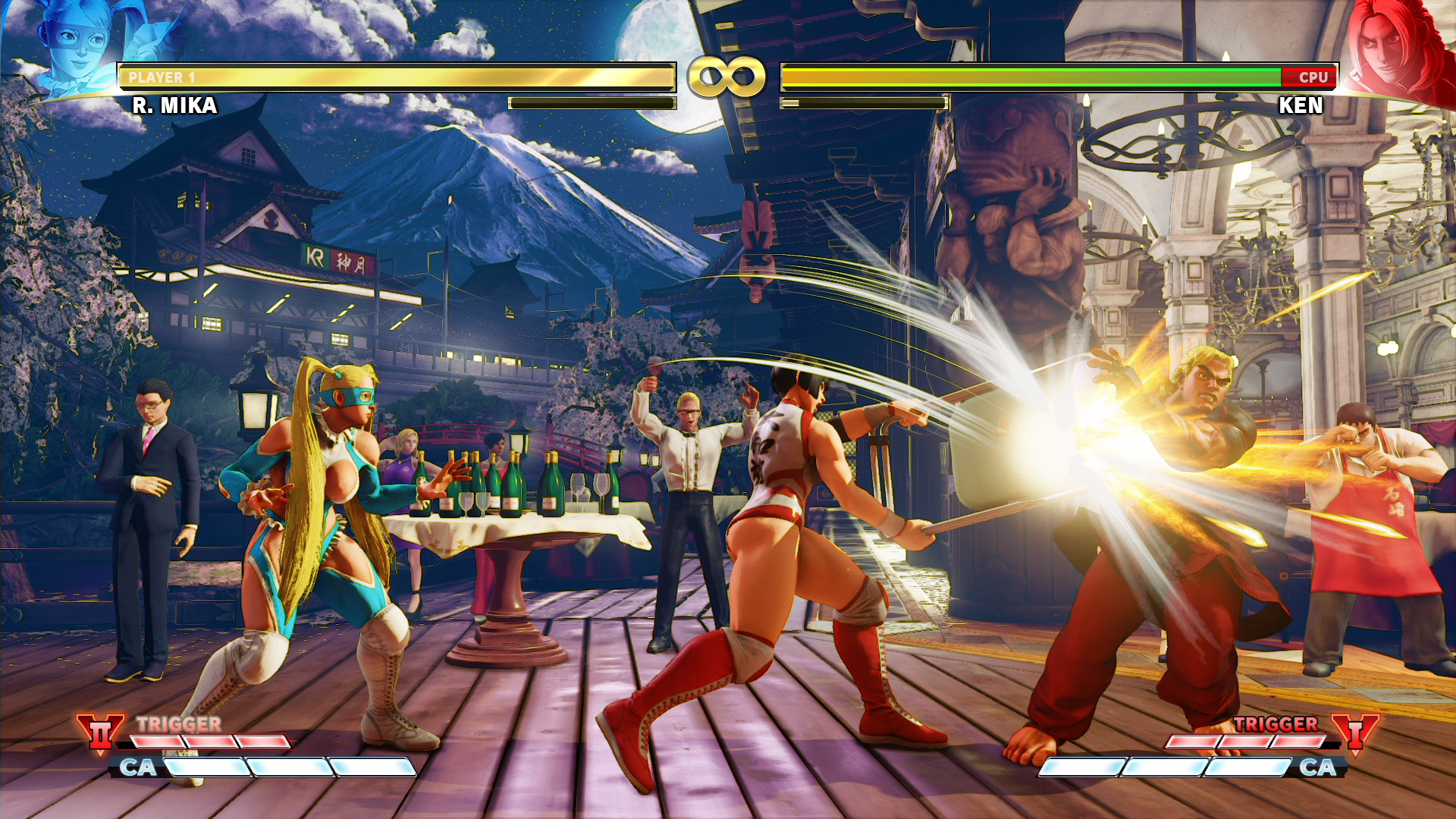 For competitive players looking to improve, the implementation of frame data and frame advantage is a huge addition. With frame data on, you can see exactly how much frame advantage a move gives on hit and on block. Better yet, characters will flash red if they’re at disadvantage and blue if they are in an advantageous situation. Having said that, it’s a missed opportunity to include this functionality and not have any mechanism to teach new or casual players how to use it effectively.

There’s still some fine tuning to be done, but Street Fighter Fighter V: Arcade Edition is finally a complete game. If you’ve been sitting on the fence for years due to the bad word-of-mouth and lack of single-player content, this is a great time to jump in. If you’re buying into Arcade Edition, you also get the season 1 and 2 DLC as part of the package, for a starting roster of 28 characters. For those of you who already have Street Fighter V, you get all of the upgrades for free, minus the DLC characters. Street Fighter may have been down, but it’s certainly not down for the count.