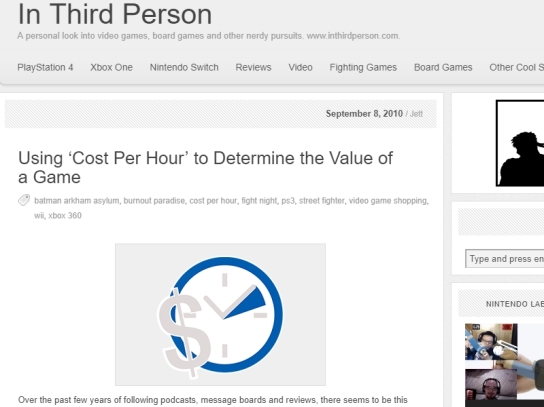 In response to PC Games Insider, CEO of Green Man Gaming Paul Sulyok had this to say:

“We believe that playing video games is a very cost effective form of entertainment and the cost per hour stat allows the community to make informed choices so they can decide how they spend their time and money against other activities. The stat was introduced in response to demand from our community who were looking for different ways of deciding how to spend their money and is not linked in any way to the value or experience of the game. This can be done through customer reviews and discussions which are also available on the Green Man Gaming store.”

My fundamental problem with this statement comes from these two parts:

“[cost-per-hour] is not linked in any way to the value or experience of the game.”

This stat does not allow gamers to make informed choices. For all of the same reasons I pointed out eight years ago, and many more that others have highlighted, cost-per-hour is a metric that skews wildly in favour of certain types of experiences while throwing a number of other types of games under the bus. Of course online multiplayer games like PlayerUnknown’s Battlegrounds and Fallout 4 score well because those games were inherently designed to be played for dozens, if not hundreds of hours. Meanwhile, short indie games like Oxenfree may look awful in this metric, but it doesn’t make it a worse game solely due to its cost-per-hour value.

Where this defense ultimately falls apart for Green Man Gaming is that part where Paul Sulyok tries to divorce the metric from the value or experience of the game. You simply cannot do that because cost-per-hour is inherently a value-based metric. You are literally calculating how much a gamer is paying to enjoy this game for each one-hour interval of play time they log. What other purpose does it have if it’s not conveying the perceived value of a game? Yes, Green Man Gaming offers user reviews and community discussion to add further context to the decision-making process, but to act like this metric doesn’t speak to value is ludicrous and dangerous.

I understand how one would get to this point, or how its consumers would ask for a feature like this. There is absolutely value in communicating estimated game length, cause there are people that value long games, and those that value short games. However, pairing time spent and cost as a metric doesn’t give players enough context in and of itself, as it funnels players down a very specific path of what value you should expect from a video game. Should one feel like they’re getting ripped off because they love short single-player indie games? No! Should PlayerUnknown’s Battlegrounds players skip out on games that could leave an indelible mark on their soul because PUBG has a better cost-per-hour? No!

Curious to see where this goes. Green Man Gaming may think it’s helping its customers with the decision-making process, but it is also setting a dangerous precedent when it comes to how gamers apply monetary value to their gaming experiences. The value of a game is far more complex than hours played divided by cost. Reducing it to that and then placing it above all of its other metrics unbalances the playing field in ways that harm great games that aren’t fundamentally built with exploiting this binary metric. Maybe this is a stepping stone towards better resources that can truly help gamers make more informed choices, but cost-per-hour in its current state is more harmful than helpful.