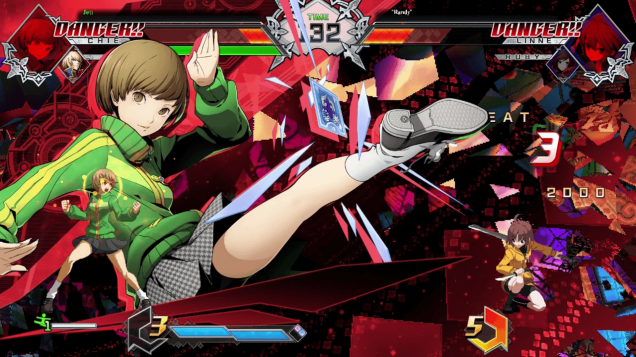 Anime worlds collide in BlazBlue: Cross Tag Battle! As with any fighting game, onboarding is going to be a bumpy ride. Even though this one has a lower barrier to entry, it’s also a niche fighter with a hardcore audience that can make the newcomer experience even tougher than most. If you’re tired of being shredded by Ruby and want to be the one slicing and dicing with her scythe, maybe this guide can get you off the ground floor!

When you start the game, it’s easy to rely on smart combos, as they simply require you to mash the A or B buttons for a quick flurry of hits. However, they also serve a dual purpose of being the backbone of a more advanced offense. Case in point, Weiss. The second hit of her B combo acts as a launcher. If you jump cancel the launcher, you can go to the air and continue your onslaught.

As another example, Ragna has a grab in this B smart combo. You can actually cancel that grab into a special move for an extended combo. None of this is spelled out in the game and there are no clear guidelines for which moves within each smart combo possess these types of qualities, but it is worth experimenting with your team to see what opportunities arise.

The concept of assist moves can be difficult for any player to grasp, as it’s an alien concept for those used to your standard 1v1 format. It can be overwhelming if you think about it in terms of controlling two characters at once, so I look at it a different way. I like to think about them is that they are 1-button special moves. Imagine a world in which Ryu is on screen throwing a fireball, and somehow a second Ryu is now also moving forward with a hurricane kick, essentially increasing the amount of forward pressure he’s applying to his opponent.

In BlazBlue: Cross Tag Battle, every off-screen character can perform one of three special moves at any given time. For the most part, these are standardized so that each character essentially has a fireball assist, dragon punch assist, or advancing move assist. How do you use these moves effectively?

Well, that’s a difficult question to answer succinctly, as it’s wildly dependent on the situation you’re in and the characters you have at your disposal. However, here’s a couple of quick rules of thumb to keep handy.

In close on the offensive

In-close on the defensive

One of the most distinct mechanics in BlazBlue: Cross Tag Battle is Cross Burst. By pressing D and P at the same time while being hit, you’ll spend all of your Cross Gauge to drop your partner into the battle, allowing your point character to flee safely. When you first play the game, it can be really hard to gain any momentum, as players will mash it out in order to minimize damage to their point character in a way that feels very safe.

The reality is that while the move is effective, it has a glaring weakness. In actuality, the move is punishable if you bait it out. For example, if you know that a Cross Burst is on the way, cut your combo short. Once you see the flash, you’re free to either block the incoming drop, punish the partner as they drop in with a DP, punish the partner with a head-invincible move (usually standing or crouching B), or call in an assist to hit the incoming character as they drop. The last two options are particularly deadly, as they open the door for a full combo. Furthermore, even after a successful burst, you now have no meter for a certain period of time, forcing you to eat the next combo in full if you get tagged.

Because of this, you want to be very mindful of when you burst. If you burst as soon as you have the meter and your opponent knows how to punish it, you’re only hurting your team even more with the switch. While it sucks to eat the damage, bursting towards the middle or the end of a combo after your opponent has burned through their assist and jump cancels will give you a much better chance of escaping clean. Furthermore, if your opponent is in a position where they can’t score much damage off the opening, just take the damage and play on. Whatever the scenario is, think before you burst!

One thought on “Kickstart Guide to BlazBlue: Cross Tag Battle”