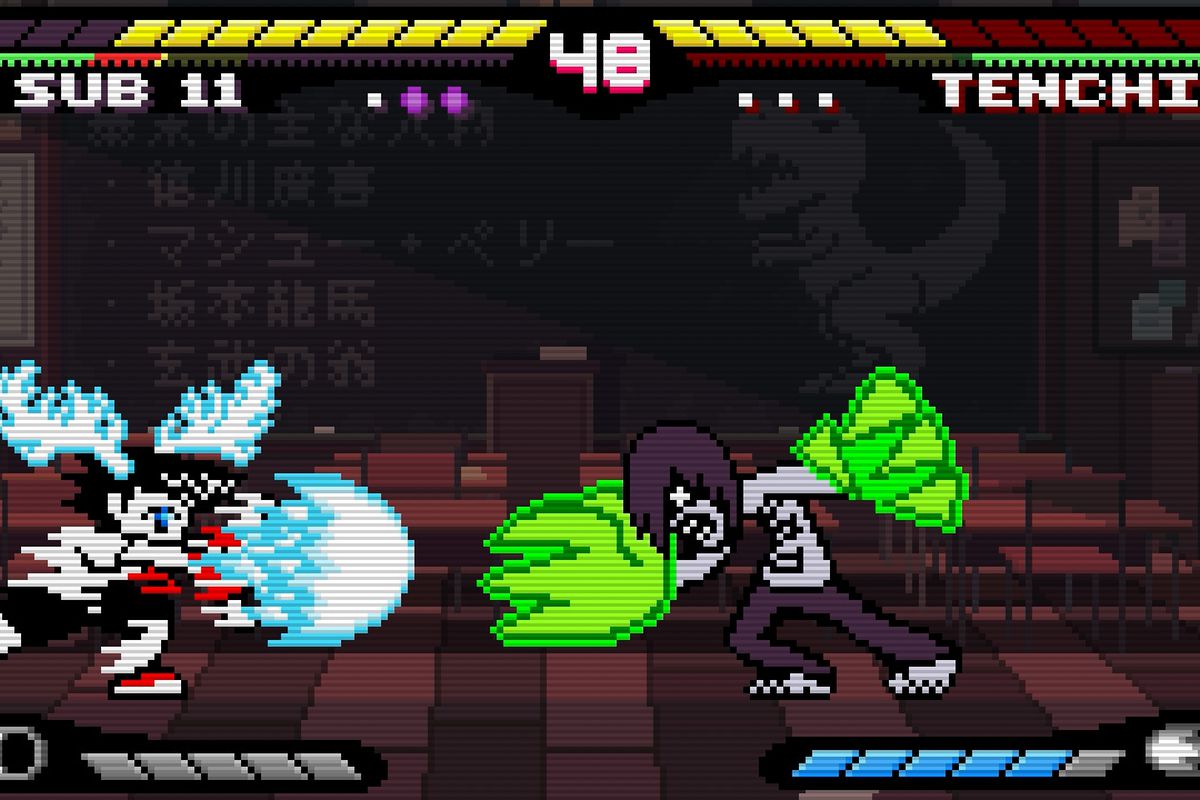 In this modern era of fighting games, the subject of accessibility has been one of the community’s hotly-debated topics. It’s no secret that the genre is impenetrable for most due to an inherently steep learning curve created by complex inputs, game design that greatly rewards skill and knowledge, and a seemingly endless wave of players locally and online that are ready to stomp newbies out until they give up. From masher-friendly auto combos in Dragonball FighterZ, to more lenient input timings in Street Fighter V, to the most extreme simplification of the genre in Divekick where each character only has 1 move, developers have and will continue to search for ways to bridge the skill gap without compromising what makes fighting games fun in the first place.

Combining a Neo Geo Pocket aesthetic with a two-button interface, simplified special move inputs, and a wallet-friendly price point, Pocket Rumble from Cardboard Robot Games is the genre’s latest attempt at accessibility. Does this game have what it takes to bring the joy of fighters to a larger audience?

This is a 2D fighter that takes heavy influence from fighting games on the Neo Geo Pocket. The game’s 8-bit visuals and music directly play off of the limitations of that platform. I enjoy how the game looks, as the characters are very well designed and they animate really well. As for its chiptune music, it’s disappointing that the soundtrack isn’t particularly catchy. Overall, it’s an enjoyable presentation to take in.

What truly makes the game tick is its combat system. Following the two-button interface of the Neo Geo Pocket, special moves have been simplified with a diagonal input and a button press. For instance, Ryu-alike Tenchi can throw a fireball by simply pressing down-forward on the d-pad and holding the A attack button. For players that are freaked out by quarter circles and shoryuken motions, this lowers the execution barrier to a point where anyone can perform a special move.

Having said that, this particular implementation has some quirks. There is a mental hoop that I struggle to jump through in having to quickly input a tap of an attack followed by a button hold to string together normal-into-special-move combos. It can be a bit fiddly at times, but thankfully the game gives you the ability to set buttons as tap-only to minimize the potential for input error.

More of an issue specific to the Switch version of the game is that mapping special moves to diagonal inputs makes playing the game on standard Joy-Con controllers problematic. It’s a nightmare trying to find the diagonals on the analog stick, and the makeshift button d-pad on the left Joy-Con can quickly cramp up your hand as you frequently angle your thumb in awkward angles in order to press two buttons for the diagonal input. It plays great with a Pro Controller, but this is tough for me to play in handheld mode.

Furthermore, while the special move inputs have been simplified, the core gameplay is almost as deep as a traditional fighting game. This is a gift and a curse. On one hand, grizzled fighting game players will quickly come to grips with the nuances of the game’s combo system, which relies heavily on strict combo timings and extended juggling. Paired with a varied cast of characters that have a lot of cool tools at their disposal, and this is an exciting new battleground to wage wars on. In particular, June is my favourite character in the game, as she’s a creepy Japanese school girl who attacks with demonic powers. With mastery of her toolset, she can pretty much swarm or overwhelm her opponents from many angles at once, which is so fun to play with.

However, if you’re a newcomer with no prior fighting game experience hoping that the simplification of special moves will make you a more viable competitor, you’re in for the rudest of rude awakenings. Odds are, you’ll want to get your feet wet by playing in a controlled environment against the AI in arcade mode. Unfortunately, the game doesn’t have adjustable difficulty settings and the AI is no slouch. Even as a veteran of the genre and with a few days of experience with Pocket Rumble, the game’s AI still routinely beats me with ease. It can be an absolute slugfest to fight through, only to receive a generic thank you screen at the end. Adjustable AI and at least some form of story or endings would go a long way towards easing players into this experience.

The game does have a short tutorial, but it’s just enough to start your journey. It does teach you some of the basic mechanics of the game and how to perform special moves, but that’s about it. I don’t expect the game to teach me how to be the Daigo of Pocket Rumble, but I wish the game gave you a bit more guidance on how to effectively use each character, especially in an ecosystem where the AI is a tough as it is with no ways of toning it down.

In a weird twist, you might actually attempt to seek asylum through online play. Netcode is backed by GGPO and its solid. The game also has a ranking system, that in theory, should match you up with players of equal skill. Not sure if it’s due to the smaller player base or quirks in the system, but the game routinely put me in the line of fire against players considerably higher on the leaderboards. Like, players ranked in the top 10 that obliterate me before I know what hit me.

Pocket Rumble serves as an interesting proof-of-concept for fighting game accessibility that takes multiple steps backwards in spite of the steps it takes forward. At its core, its a hardcore fighting game that happens to have all of the complexities of the genre without the complex inputs. If you already know what you’re doing, this is a cool playground to battle and experiment in. In particular, the game features excellent character designs that will keep you in the lab or battling online opposition for many hours to come. Veteran fighting game players on the Switch on a really tight budget could justify the purchase of this game and really get a kick out of it. I will probably continue to noodle with this one well after I’m done reviewing it, as the core gameplay is really fun.

However, it’s difficult for its intended audience of casual or lapsed players to make the most of its features when the game savagely beats you at every angle, from AI that’s tuned to be too difficult without the ability to adjust it, to wonky matchmaking that throws newbies to the wolves. Adding insult to injury, the bare-bones feature set of the game means that getting trounced by the AI in arcade mode or by fellow players online is essentially all you can do with the game. I know that the game is set to see major updates later on that could address much of this, and its issues are things that could be fairly easily addressed in future updates, but at this point, it’s tough to recommend in its current state. If the developers are able to sort out these kinks in the future, then this is much easier to recommend for those interested.