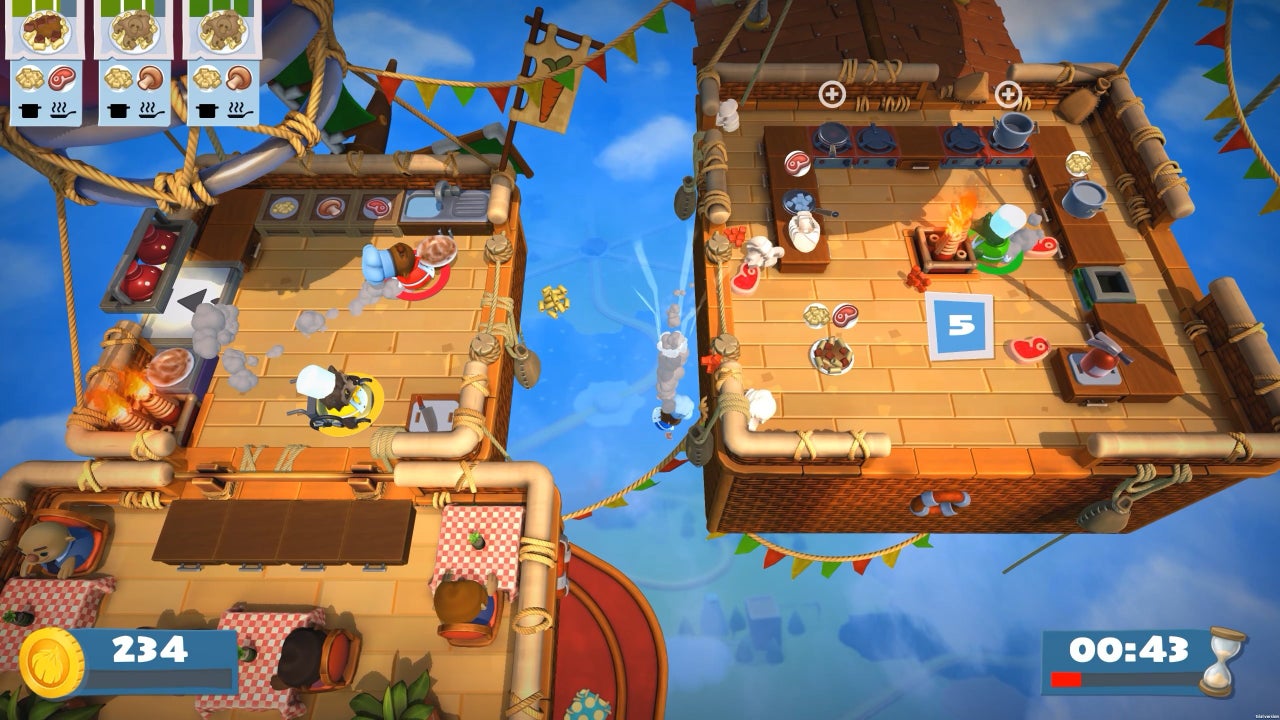 My experience with the first Overcooked can be summarized by two distinct emotions: joy and anger. Having four players frantically attempt to coordinate their efforts in fantastical kitchens is a riot in the moment. Easily one of the most novel gaming experiences one can have with friends. However, structural choices such as overly-difficult score thresholds to unlock levels, a lack of online multiplayer, and a subpar single player experience made for a game whose shelf life petered out for me much sooner than it should have. On top of that, the Switch version had performance issues that wouldn’t be ironed out until long after launch.

Despite my criticisms of that first game, it was still a rousing success, selling over 500,000 copies on Switch alone. Furthermore, I came into Overcooked 2 with faith that at least some of my concerns of the first game would be addressed. Does the sequel fulfill the potential of the first?

In the last game, the setup for all of this fantastical kitchen action was the appearance of a monstrous meatball hell bent on sending the world into the apocalypse. This time, it’s a mess of our own doing. The Onion King was messing around with a spell book and accidentally summoned “The Unbread”. Essentially, zombie bread. As the on-duty chefs during that time, your goal is to fend them off by doing what you know best: cooking.

You’re still tasked with completing as many orders as possible by working as a team to complete different meals in a timely manner. Ideally, you’re doing this with at least one other human chef, though you can play it alone. Solo play is functional, as it requires you to toggle between two chefs, but it’s still not ideal. At the very least, online play gives you access to human players at all times, which is an improvement over the first.

All of the kitchens are still ridiculous in nature, from one that has incoming traffic that can run you over, to another kitchen in a hot air balloon that crash lands on a different kitchen. The game really goes out of its way to put you in crazy predicaments and I really appreciate the effort. 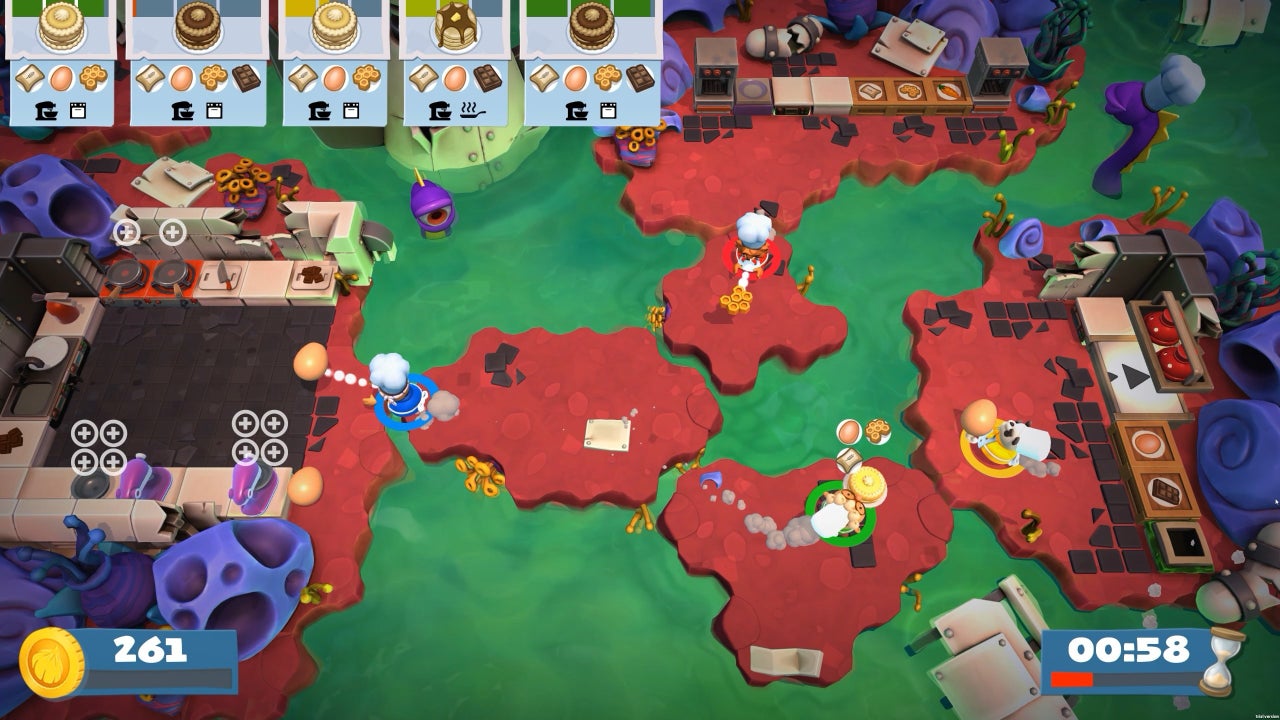 Keeping much of what made the first game great, Team 17 has added a few new wrinkles to the experience. Most notably, players can now throw raw or chopped ingredients. This shakes up the game in a big way, as you don’t have to spend as much time running around the screen. Instead, you can throw items across the screen that your fellow chefs can catch, directly into pots, or simply throw them on the floor across the room that someone close by can pick up. Besides giving players an extra level of efficiency when used correctly, oftentimes the levels are designed to make throwing mandatory or at least greatly encouraged.

Almost as a counter to that, the complexity of the recipes has been turned up a notch. Not only are you tasked with creating different dishes during each level, but some recipes now add a new step to the process: mixing. After certain ingredients have been chopped, they need to be mixed together before being thrown in a pan or a steamer. It can get really hectic trying to keep all of the steps sorted out amongst group members, but it’s a welcome addition to the formula that makes perfect sense within the context of cooking.

My biggest complaint about the first game was that the game’s score thresholds were too high. Me and my group never finished the game or experienced all of its content because we simply weren’t good enough to earn enough stars to unlock the latter levels. Overcooked 2 tackles this challenge in two different ways. One, the scoring thresholds and star requirements seem to be a bit lower than the first, making it easier for players to progress without taking away the challenge of each level. It ramps up by the very end, but if you average about two stars per level, you should be fine. 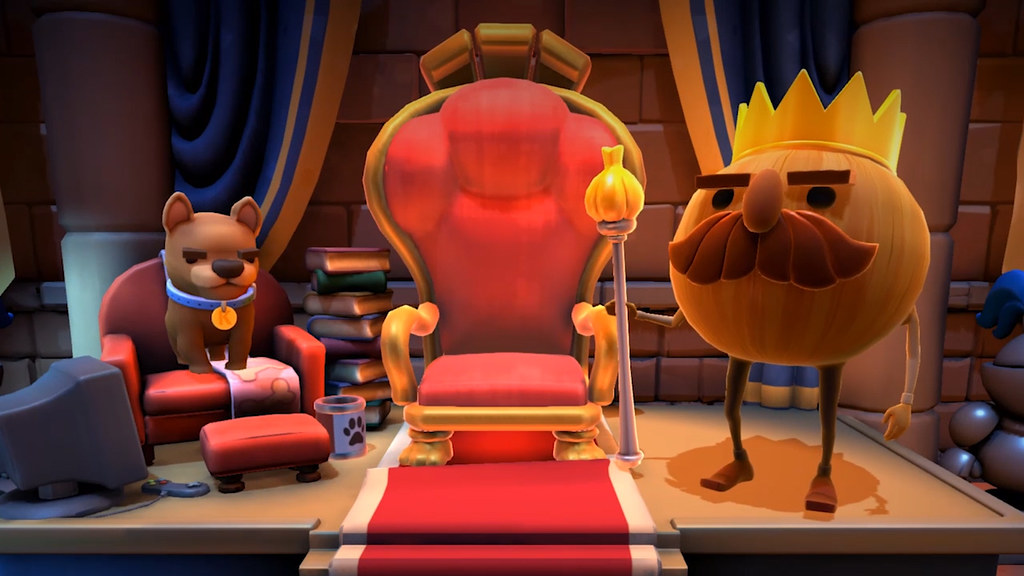 Furthermore, the new Arcade mode gives players access to all of the levels right away, except that the game chooses a random level based on the world you have chosen. At the very least, players of all skill levels can experience all of the levels that the game has to offer, even if you can’t pick the exact level you want at any given time. I think it’s a fair compromise. Playing online with strangers though can be messy – especially so on the Switch – as the game requires a lot of communication and the system doesn’t have built-in voice chat. The emote system isn’t enough to get everyone in sync.

Speaking of online play, you can play the Arcade mode with all comers, or partake in the Campaign with a private party. The latter is where I plan on spending most of my time, as I’ll get so much more out of playing this game with friends in other places. Thus far, I haven’t noticed any major hiccups with the netcode, though of course your results will vary based on your proximity to other players. If you aren’t the one hosting the game, it can hitch up a little bit more, but most of the time it isn’t enough to break the game.

While we’re on the topic of the Switch version, we should cover the game’s performance. The first one was a disappointment at launch, as it had some performance issues, particularly with maintaining a smooth framerate. The sequel runs great out of the gate with no noticeable hiccups to report.

Overcooked 2 avoids the sophomore jinx by improving virtually every aspect of the game. The chaotic cooking action is as exciting as ever, while giving players new abilities to run their kitchens more efficiently, more elaborate recipes to keep you on your toes, and a means of playing with friends and strangers online. On top of all of that, lower scoring requirements and the new Arcade mode ensure that players of all skill levels will have the ability to play every level that the game has to offer. The solo experience still doesn’t showcase the game in its best light, but the advent of online play makes it so that you don’t have to play the game alone if you don’t want to. For those craving a party game that can be enjoyed by a wide audience, Overcooked 2 hits the spot.