I thought Marvel vs. Capcom had bitten the dust off the lackluster performance of Infinite. But recently, a fairly-reliable source has stated that a Marvel vs. Capcom: Infinite update is on the way, and it will be renamed Marvel vs. Capcom 4. Whether it’s true or not is beside the point. What I wanted to do was to use this as a jumping-off point for a discussion around a future entry in the Marvel vs. Capcom series. Real or not, what does a hypothetical next entry in the series need to look like in order to rebound from disaster?

It has to look MUCH better

Capcom did a lot to sink Infinite‘s chances of success. But the one that was arguably the most damaging to the game’s pre-launch perception was Chun-Li’s dopey face. Though Capcom would fix her face before launch, it became emblematic of the game’s sub-par graphics. Especially in a post Dragon Ball FigtherZ world, a new entry in the series has to be eye-catching. It doesn’t necessarily have to go back to the comic book style art direction found in Marvel vs. Capcom 3, but it certainly can’t be what was displayed in Infinite.

The X-Men must return

From cutting the fan-favourite characters out of games, to trying to push the Inhumans as the next X-Men on all fronts, Marvel’s squabbles with Fox over movie rights have negatively impacted their output for over a decade. The X-Men have been a staple of Capcom’s crossover games since the beginning, making their exclusion even more painful than it already was. I know that Marvel recently bought Fox and there’s still a lot of legal hoops to jump through before it’s all settled. That said, their inclusion in the next entry in non-negotiable.

To the credit of Marvel vs. Capcom: Infinite, it attempted to provide players with a single-player story mode in the same vein as Mortal Kombat and Injustice. Sadly, it was a train wreck. Yes, writing a story involving that may characters is really hard. However, it doesn’t excuse how hokey everything was, from the cheesy action sequences, to the poor plot, to sub-par voice acting. This isn’t Capcom’s first kick at the can, either, as the story mode in Street Fighter V also tried to replicate the Netherrealm formula and failed miserably. Simply stringing together fights with cutscenes isn’t enough if you don’t put enough care into the plot and the performances. Capcom should go back and watch Netherrealm’s stories with a keen eye towards details in order to close the gap.

It doesn’t necessarily have to be a full-blown campaign, either. Ideally, an arcade mode with individual character endings would suffice at the minimum. Infinite had an arcade mode, but no endings. Just take the extra step! 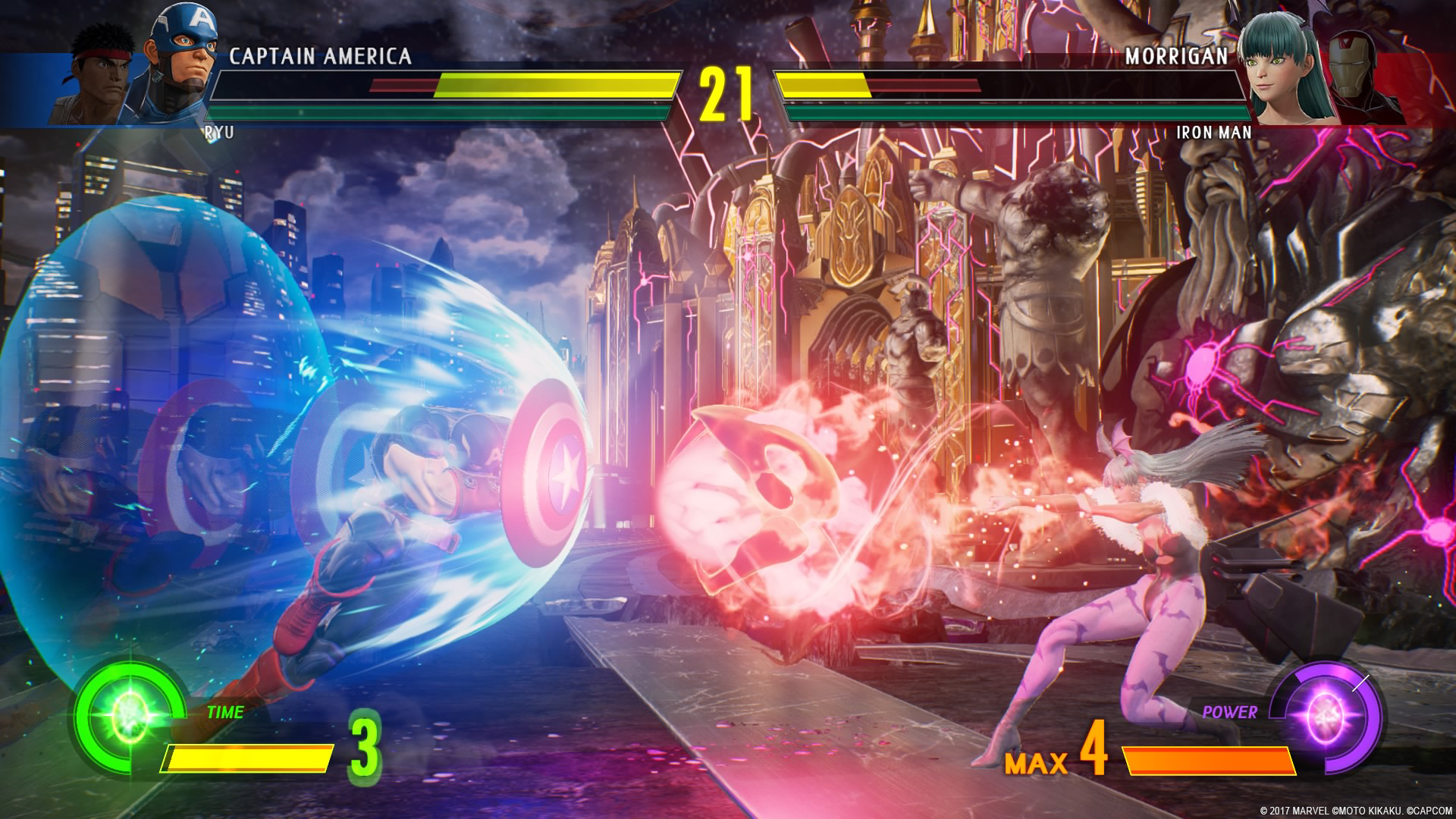 This is going to be a controversial opinion here, but I think that Capcom was really onto something when they abandoned the traditional assist system with Marvel vs. Capcom: Infinite. As cool as assists can be, they oftentimes dehumanize a character to the point where their primary (and sometimes only) function on a team is to act as an assist. Dragon Ball FighterZ ate Marvel vs. Capcom: Infinite‘s lunch in almost every regard, but their limiting one-assist-per-character approach actually amplifies that problem.

Infinite took a whole new approach to teamwork and it’s spectacular. Having one character perform an attack while another runs in allows players to create so many more insane offensive and defensive possibilities. If anything were to be carried over, it would have to be this tag system. We can throw away the gems while we’re at it, too.

While I’m not fundamentally opposed to 2v2, this was a major sticking point for gamers. Despite Capcom’s messaging around creating better team synergy, people simply saw the number drop from 3 to 2 and thought it was a downgrade. For marketing purposes alone, going back to 3v3 is a sound choice. Some adjustments would need to be made to make it work with the active tag system, but I think the extra effort would be worth it.

I’m reluctant to put much stake into this particular rumor, but I’m hopeful that we can see Marvel vs. Capcom return to its former glory. If the franchise were to return, what would you want to see out of it?