Tetris Effect was not on my radar. I adore Tetris, to the point where I’ll gladly argue the stance that Tetris is the single greatest video game of all-time. However, it didn’t seem hard for me to build a case against me purchasing this particular version. Even with Tetsuya Mizuguchi’s flair for injecting games with hypnotic visuals and moving electronic music, the idea of paying $40 US/$50 CAD on a single-player-only version of Tetris seemed too hard to stomach. Especially when I’ve hemmed and hawed at picking up the cheaper-and-more-feature-complete Puyo Puyo Tetris on the Switch for over a year now.

Then the reviews happened. As of writing, it sits at an 89 on Metacritic, which is a fantastic score. All of a sudden, the game I’ve dismissed for largely rational reasons has flung to the top of my must-buy list. The only thing that’s changed is that a bunch of other people have said nice things about it.

In the world of urban fashion, the term often used for someone who chases trends is “hype beast”. If I really think about it, I am probably the video game equivalent of that. Sure, I’ll still play games and buy what I want based on my own personal motivations, and my final opinions on games are entirely my own, but the games I choose to buy and play can be heavily influenced by the conversations within the greater gaming zeitgeist. This is my story as a gaming hype beast. 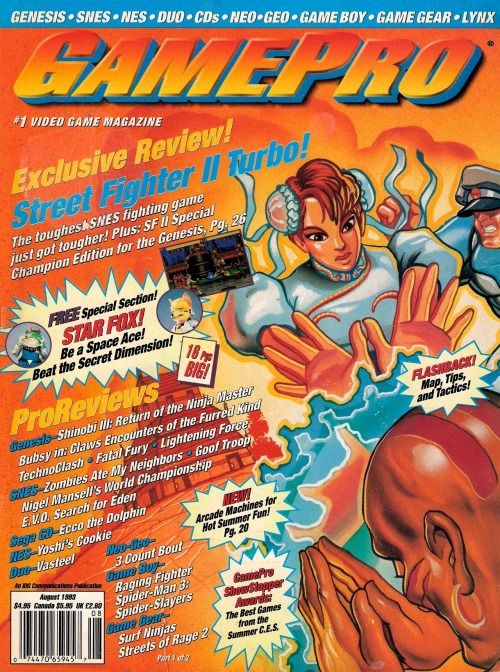 As a kid, my understanding of the greater gaming landscape didn’t reach beyond the collective gaming knowledge of my friends and family. I would play whatever games they had and didn’t know what existed outside of that. But then a birthday present from my friend Faiz changed my life.

Inside the present were a few items. One was a Toronto Blue Jays hat. I’m blanking on the second item. The third was an issue of Gamepro magazine. It’s easy to poke fun at it in hindsight for its amateur writing, but its mere existence blew my mind. The content within those pages gave me a glimpse of a much larger gaming landscape that I wouldn’t have known about otherwise.

Being plugged into the greater discourse of games gave me a power trip. I felt good knowing that I avoided “Game X” in spite of it’s great box art because the reviews said it was crap. I also loved knowing what games were on the horizon, helping me develop a sense of what to be excited for in the coming months/years. The knowledge came in even more handy when talking to fellow gaming enthusiasts. Together, we could really discuss specific games and the broader gaming scene in a way that is way more satisfying than what I could have done with my own narrow worldview at the time. If anything, being a part of the conversation is just as much of a hobby in itself as actually playing the games.

I don’t think it’s an inherently bad thing to be a gaming hype beast, as long as it doesn’t impact your life or the lives of others around you in a negative way. In fact, without the information and conversation that I got from magazines and online, I probably would have stuck to the same handful of Nintendo franchises or fallen out of the medium completely.

I can point to a ton of amazing games that I only discovered thanks to the greater conversation about games, but the biggest positive influence on me occurred during the Wii era. Having been loyal to a fault, I really felt betrayed by the Wii and its focus on the types of games that weren’t meant for me. Through the influence of podcasts and hearing about all of the incredible experiences they were having on other consoles, I decided to broaden my horizons and buy non-Nintendo platforms. Will still classify myself as a lifelong Nintendo fan, but I’m glad to know now that there are a lot of games on other platforms worth playing as well.

I am easily swayed into trying out or avoiding games based on their review scores, but my final impressions of a game are my own. The critical reception was enough to get me to play Journey, but no amount of convincing will move me off of Journey-hater island. Conversely, I vehemently disagree with the gaming zeitgeist regarding ARMS, as I feel like that game is better and deeper than most give it credit for.

Also, while review scores and general conversation around a game can push me to buy games outside of my comfort zone, I do have my limits. Having been burned too many times by Assassin’s Creed, no number of reboots and high scores will get me back. Undertale was a critical darling and has a fanatical fanbase, but I don’t see anything there that appeals to me. Even if Red Dead Redemption 2 somehow hit 100 on Metacritic, my distaste for the first one has me in no rush to try its critically-acclaimed sequel. On the other end of the spectrum, mediocre reviews didn’t stop me from buying Ultra Street Fighter II because I love that franchise and I wanted the ability to play a version of Street Fighter II on the Switch at that time.

I’ll be the first to admit that my choices in gaming can be heavily influenced by external factors. Generally speaking, I think that’s okay! Gaming is an expensive hobby and it’s understandable to want as much validation as you can get before plunking down the funds on a new game. There are absolutely ways in which this process can become an issue, but I don’t think I’ve crossed the line on bankrupting myself in order to be in possession of all of the hot games, or lacking an opinion of my own, or being a snob to someone whose views don’t line up with the consensus. How much do external factors impact your game playing and purchasing decisions?

Tetris Effect review coming real soon! Not having multiplayer is a letdown, but it compensates by changing the fundamental feeling of Tetris. Come back for the full review!

One thought on “Confessions of a Gaming Hype Beast”