What has gone largely unchanged here is the core gameplay. Just like the entries that came before this one, you’re tasked with placing blocks in a 10×20 grid. Lines are cleared as you create full rows of blocks with no gaps. You also want to avoid having your blocks go past the top of the well, as that will end your game in almost every case.

The game’s one new mechanic is only available in the main campaign. At the bottom left hand corner of your interface is a circular Zone meter. By pressing one of the triggers, you can temporarily pause the downward trajectory of your pieces. This allows you to more precisely place your pieces without the pressure of fast-falling blocks. During this period, you can clear out a massive swath of the board – up to 18 lines at once, which is called a “Perfectris” – but they don’t count towards your line total and any blocks cleared simply stack upwards from the bottom. It can get really tough if you’re attempting to score a Perfectris or the lower-but-still-impressive Decahexatris (16 lines removed while in the zone). Whether you’re shooting for a high score or you need to create some breathing room in a jam, the Zone meter can greatly benefit your cause. Unfortunately, it’s only available in the main campaign and not in any of the game’s side modes.

What truly makes Tetris Effect stand out from the titles that came before it is the game’s emphasis on presentation. Beautiful backgrounds pulse to the beat and fire particles everywhere as you complete lines. Even the blocks themselves have an extra level of visual flair, as they change from neon hues, to ice, then to fire, among many other treatments that fit the overall aesthetic.

As pretty as it looks, I think the element of its presentation that brings it all together is the music. In true Mizuguchi fashion, its soundtrack flutters between pulsing EDM, ambient vibes, and international rhythms that give the game a distinct audio footprint. When you take it all in, the experience is equal parts euphoric and hypnotic. It almost gives the game a more emotional sensation as you play it, which is something I normally don’t get or expect from my block-stacking puzzle games.

Serious players may take offense to some of these aesthetic choices. For one, the backgrounds and explosions can make reading the board difficult. Especially in situations where the blocks blend into background objects or explosions obstruct the front of the board. By default, when not playing in VR, the board is really small relative to size of your screen. You can tone down some of the special effects and zoom the board in at the expense of neutering the overall presentation. I prefer to play with the board zoomed in, but all of the effects on. Maybe it’s detrimental to me getting the highest score, but I think I would still want as much of the bells and whistles as possible that come with this particular version of the game. I also noticed hints of slowdown during the most intense animations on my standard PS4, but it didn’t impact my gameplay and I’m pretty sure this slowdown would resolve itself with lower settings.

Players will likely spend most of their efforts working through the game’s campaign, which goes by the name of Journey Mode. In it, you’ll take on a series of 30 challenges, which have been grouped together to form levels. By forming lines, you’ll hit your line requirements to hit the next challenge.

The campaign has three difficulty modes, but It’s worth noting that the speed progression within each level isn’t necessarily gradual or linear. There are times when the board will dramatically shift into hyper speed in the middle of a round, or times when the board starts out at full tilt before slowing down later. I like the way in which these unorthodox shifts keep you on your toes, but they can really put a damper on your progress if you’re not ready for them.

I enjoy the trip that it takes me on, though it is rather short. Having beaten it on Normal and Expert, a no-fail run can be completed in under two hours. I would imagine that the average person could beat the campaign at difficulty level appropriate for them in under three hours. It’s short, but sweet. You may want to play it again just to take that intoxicating trip, or play it again to increase your overall campaign high score, which is presented in the game’s online leaderboards.

Leaderboards for the main campaign and the 10-or-so side modes become a critical part of the experience because the game lacks any sort of head-to-head multiplayer. This omission feels intentional, as I can see how the makers of this game felt that intense direct competition ran counter to the game’s more relaxed ethos. However, in a world where you can get Tetris almost anywhere else for less with competitive multiplayer, it does sting to not have it here. 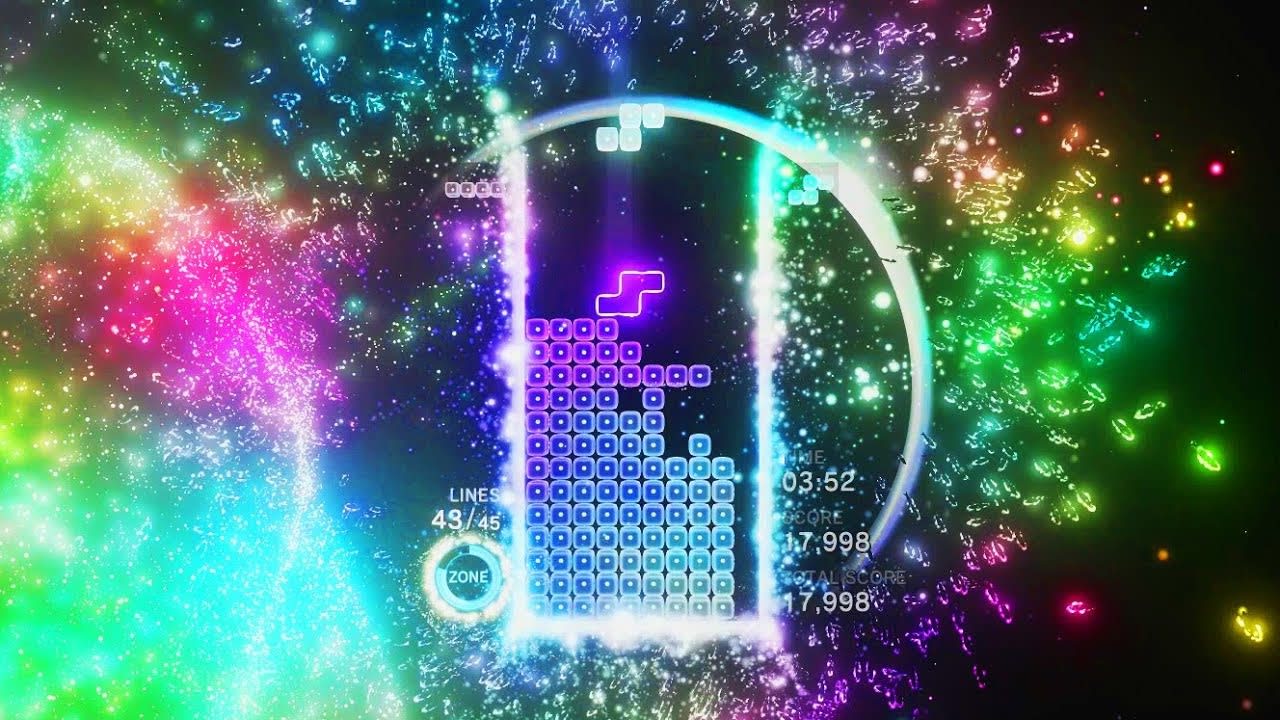 Then again, those other versions don’t have the trippy visuals, phenomenal soundtrack, or VR support, so it’s a bit of give and take. On top of that, there are a ton of modes to compete in, as well as limited-time event-based modes that seem to drop in on weekends only, giving you reason to come back. During its first weekend out, it gave players access to a throwback skin and song that were a direct nod to Tetris on the Gameboy. Playing the game with that skin in Mystery mode was the ultimate mash-up of old school aesthetic with new school presentation and shenanigans and I ate it up. Looking forward to what else the developers have planned for the future!

The value proposition of Tetris Effect is debatable, but its effect on your heart and mind when you play it is undeniable. It’s a Tetris experience unlike any other. When that blend of classic gameplay and euphoric presentation come together, it feels like you’re melting into the game. If you want to experience that unique sensation, and/or if you loved playing Tetris on the NES or Gameboy to chase high scores without worrying about being able to compete directly against friends, this is a must-play.