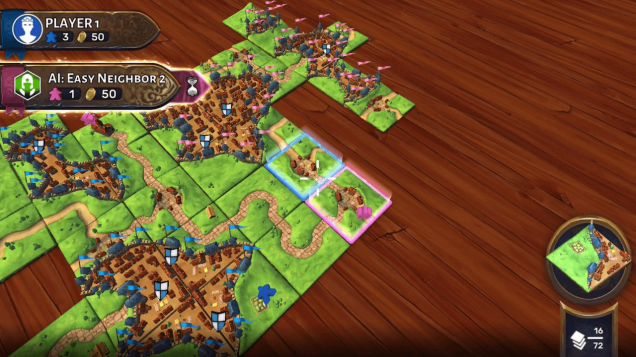 Simple to learn, difficult to master, and providing a unique challenge every time, Carcassonne is a tabletop gaming classic. It’s no stranger to the world of video games either, as it’s made some fantastic appearances on mobile and the Xbox 360.

It goes without question then that the much newer Nintendo Switch version should provide a better experience then, or at least one comparable to those older iterations. Right? 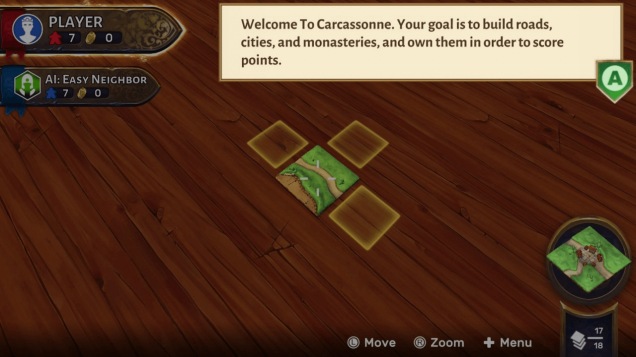 Inspired by the French fortress of the same name, Carcassonne is a tile-laying game where players build out the fortresses and surrounding landscape. On your turn, you’ll draw one tile and add it to the area. Besides having to line up roads and cities in ways that make sense, you usually get a lot of options for where and what orientation you place your tiles in. From there, you can place one of your meeples on the board as a knight to claim a fortress, highwayman to claim a road, a monk to claim a church, or a farmer to claim a field.

Scoring isn’t as simple as placing a meeple. You’ll get one point per tile for a road that you’ve claimed. Once the road is closed in by villages, you get the points and get your meeple back to be used elsewhere. Monks score a point for every tile immediately surrounding the monastery, but you can’t get that meeple back until it’s fully surrounded by tiles. Cities can net you big points, but you can score double if you manage to completely enclose the city in walls. Farmers score points for each completed city in their area, but you can’t get them back and they can be highly dependent on others to complete cities on your behalf. And despite calling first dibs on a feature, there are sneaky ways that others can weasel their way in by claiming adjacent tiles that you have to connect, allowing the other player to gain points from the same feature. Once all of the tiles are gone, the player with the most points wins and you get a uniquely-crafted area each time you play.

With the vast amount of variability in the game’s core design, Carcassonne is one of my favourite tabletop games. The mobile version is fast and snappy to play on the go. The Xbox 360 version was one of the first tabletop games to benefit greatly from online play. The Nintendo Switch version is a bit disappointing compared to those versions. 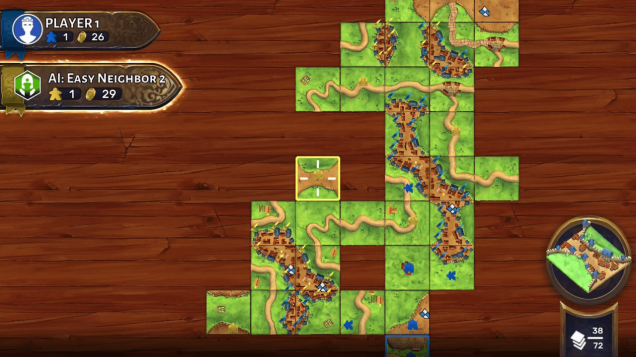 By default, the game presents the action in an isometric view. It looks pretty and allows for the cities to show some verticality but it doesn’t make for the most functional way to play. You can zoom and pan for a better view, but you can’t rotate the camera, making tiles towards the upper-right hand corner harder to see. Once the novelty wears off, I recommend switching to the traditional overhead view.

Once you take that out, it’s very similar to the Carcassonne experience you’d get from the mobile or Xbox 360 version. The core gameplay retains the mastery of its tabletop roots, even if it’s a touch clunky to control due to the game’s slower-than-ideal pointer movement. The game does allow you to turn off some of the its more frivolous animations to make for a snappier experience, but being able to tune the analog stick sensitivity would have worked wonders. Would be nice to use the touchscreen in portable mode, but the game doesn’t read touch inputs. If you’ve never played before, this version has a decent interactive tutorial plus a full set of written rules. Once you play the tutorial, you should be good to go.

You can play with up to four players locally or add in AI opponents with different difficulty settings and behaviours. For some odd reason, the AI can be unusually slow to complete its turn. Going back to the mobile version to compare, the Switch version takes more time to think its move through. Not sure what the holdup is, but it needlessly slows the game down.

While I appreciate all of the local options available, the distinct lack of online play is sorely missed. Considering how the Xbox 360 version had online play over a decade ago, its absence here is inexcusable.

Carcassonne on the Nintendo Switch is a fantastic tabletop game hampered by a lackluster port. If this truly is your only way to play, you’ll still have a good time placing tiles and outmaneuvering local or AI opponents. Turn off the isometric view and disable the lengthy animations for a game that’s almost as snappy as its mobile counterpart.

However, its value proposition is highly suspect, especially when other digital versions have online play, are more portable, smoother to play, and are a fraction of the cost. For its base price, you might even be better off buying the physical tabletop game. You should absolutely play Carcassonne in some form, but there are better ways to play than the Nintendo Switch version.