The night before every stream, I do a technical check. Firing up all of my equipment, I ensure that everything is functioning as intended and that the audio mix between my mic and the game. After configuring everything for Super Mario World 2: Yoshi’s Island, I revisited an old fave: Super Punch-Out!!.

At the time of its release, I adored this game. Beat it many times over back in the day, and couldn’t put it down on this day until I sent the final boss down to the canvas. Much of my muscle memory was still intact, as I finished the campaign with a record of 16-2.

In large part, Super Punch-Out!! is still a great game and worthy of your time. Personally, I think it’s better than Mike Tyson’s Punch-Out!! – its predecessor that has reached mythical status in the gaming community. Even so, it quickly got lost in the shuffle at the time of its release and it’s nonexistent in the greater conversation of gaming. What happened?

Before we get into throwing dirt on Super Punch-Out!!‘s name, we need to take a moment to discuss what makes it great. Graphically, Super Punch-Out!! is a massive leap. With the ability to present a transparent Little Mac, the camera is lowered to give players a more immersive view of the action. This angle is akin to its arcade roots but without the green wireframe figure of Little Mac that always looked out of place.

With the extra horsepower of the SNES, your opponents take up a sizable portion of the screen and are full of life. Many take sidesteps around the ring and possess a wider arsenal of moves. Most dramatic are those who take liberties with the rules. You’re going to be blocking and dodging elbows, headbutts, flying kicks, whipped hair, and even a cane. Considering how unrealistic the franchise was to begin with, I’m glad that Nintendo went all-out to put players in the wackiest scenarios they could at the time.

You get a few more moves too. The change in perspective allows for you to block high and low, versus just high in the NES game. You also get a number of different super punches at your disposal, from haymakers to lightning quick combos. Everything works together to provide a more involved experience. 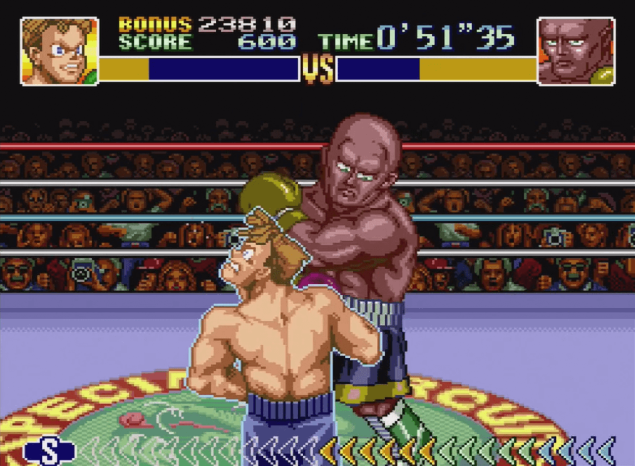 I also appreciate the game’s difficulty curve. Unlike Mike Tyson’s Punch-Out!!, the SNES version is a beatable game. Still tough, but it doesn’t have its equivalent to Mike Tyson where the difficulty spike is out of this world.

This slant towards accessibility has proven to be a double-edged sword. Part of what keeps NES Punch-Out!! in the conversation is that the final battle with Mike Tyson (or Mr. Dream) still stands as one of the most difficult encounters in all of gaming. For most players, that fight will end before you blink! Taking him down is a real gaming achievement. Even for expert players, there’s still an active speed-running scene for those wanting to squeeze every last ounce of efficiency out of their play.

Though taking down Super Punch-Out!!‘s final boss is a much more achievable feat for most, it doesn’t lend itself well to the ongoing gaming conversation. You can play it, beat it in a few hours, and move on with your life. Mike Tyson’s Punch-Out!! made a lasting impact, whether you got absolutely destroyed by Iron Mike or you put in the effort to take down the legend.

Speaking of which, we can’t overstate the importance of Mike Tyson’s appearance. At the time of release, he was the most popular boxer of his time and one of the most popular athletes in pop culture. Putting him in this game allowed it to plug into the zeitgeist in a way that no boxing game had before or since. As insane as that boss fight might be, of course we would have expected a Tyson boss fight to play out that way. That’s what we saw him do in real life. Though his boxing days are long over, Tyson is still a cultural figure whose name has weight. With the way that video games and boxing are trending, we may never see such a pairing work this well ever again.

Super Punch-Out!! is a great game that I still argue is the superior experience. But the places where it comes up short tremendously impact its relevancy. The world might have forgotten about this pugilist, but Nintendo hasn’t. It’s been released on Virtual Console and most recently got ported to the Nintendo Switch as part of its online service. If you happen to have access to it, make sure to give Gabby Jay a massive super punch to the face for me.