A while back, my wife and I were at a local clearance outlet. Scrounging through the store’s toy section, we stumbled upon the Monopoly Cash Grab Game. Unlike its classic tabletop predecessor, this one essentially boils down to one player shooting Monopoly money out of a money gun while the other players grab as much of it as they can.

I bought it with the intent of using it as a prop on stream. Finally, to celebrate reaching 200 follows on Twitch, I emptied the chamber in a blaze of glory to the delight of everyone viewing live and for those who saw the clip on social media afterwards.

[SIDE NOTE: Thank you for your ongoing support! The best part of streaming is the opportunity to spend time with you. Will continue my best to make this show valuable to you!]

The money gun was a blast to use. But was it a better use of my limited streaming budget at that moment? Especially when I’ve squeezed every ounce of life from my aging PC?

100% chance of rain when we celebrate! Thank you to everyone who supports the Twitch channel. You pushed it past a new milestone! This one is for you! 💰💵💴😍#twitch #highlights #videogames #gaming #moneygun #monopoly #hype #makeitrain pic.twitter.com/egyA3TIKpc

As I’ve gone through the process, I’ve developed a sense for what I value. Above all else, I value the company of cool people who congregate to the channel and engage with me, others in the chat, and the content I’m creating. Even if there’s only one person spending their time with me, the interactivity between us and the satisfaction that comes with providing someone with content worth watching live makes this experience worthwhile.

Every decision I make regarding the stream comes back to that guiding principle. How does changing variable X impact the watchability of my stream?

Oftentimes, there are technical factors that can improve a stream’s quality in the eyes and ears of viewers. For example, frame rate is very important to me, as choppy streams are unwatchable. My current computer wasn’t able to maintain a steady frame rate for a 720p, 30 fps stream. In order to achieve that goal, I had to install a solid state drive to improve my encoding speeds and eliminate performance-based frame rate drops. Even with the SSD installed, some of my overall performance settings such as resolution and bitrate are below-average in order to maintain a steady frame rate due to my aging CPU.

Maintaining a steady frame rate is paramount. But is it a priority for me to stream at 60 fps vs 30 fps? 60 is better than 30, and certain games benefit from 60 fps a great deal. Even so, it isn’t going to make my stream 50% more enjoyable to watch. On top of that, being able to make that jump in frame rate will cost me hundreds of dollars in computer parts. Depending on your situation, it might be over a thousand for a new computer, capture card, and camera. I do plan on making the upgrade eventually, but I’ve prioritized other areas of improvement that are cheaper and make a more immediate impact to my content.

For example, optimizing my existing equipment has been a continual point of emphasis. Out of the box, the image quality for many popular webcams such as the Logitech C920 are okay at best. However, you can improve the image quality considerably with enough light sources and making the right adjustments in your camera settings. Set properly, even a mediocre camera can do a good enough job of showing my emotions during intense moments or displaying the details I present in my backdrop. Having the proper settings can also go a long way towards improving the sound of your existing microphone. 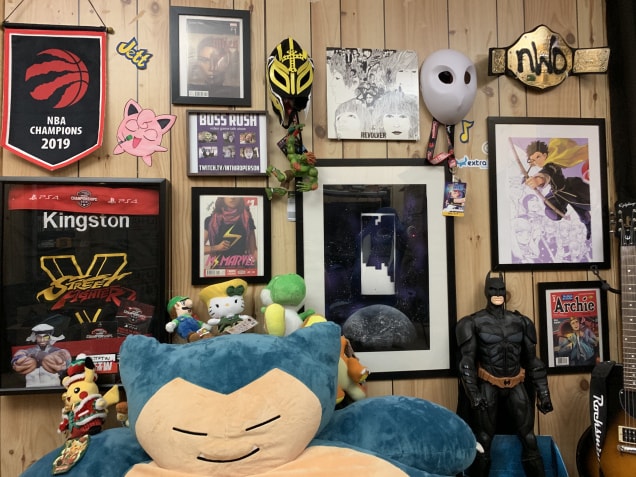 Another area of improvement is my studio decor. In the early days of my stream, there was nothing behind me but an outdated wood panel wall and my Snorlax bean bag chair. It was boring at best and an eyesore for viewers at worst. By decorating the space with a lot of art and collectibles I already had, it gave viewers a more interesting backdrop filled with potential conversation starters while also giving me the opportunity to showcase my interests within and outside of gaming.

By adding the room cam, it further amplifies the fact that I’m a person existing in a physical space, rather than floating in front of a video game. Having this room is a big differentiator for me and I constantly look for ways to make this space a part of my overall value proposition for viewers.

Attaining Twitch Affiliate status allows me to provide subscribers with custom emotes that they can use anywhere on the platform. These emotes have proven to be an amazing way for viewers to express themselves, whether that’s by using the “Mind Blow” emote during shocking moments, the “Maximus” emote for Tetris 99 wins, or spamming the “Airhorn” to amplify statements of any sort.

Though I could have hastily thrown together emote designs of my own, I’m glad that I invested in designers that created awesome emotes that viewers want to use. Thank you again Laura and Heather for your amazing art!

Which leads us to the money gun. For roughly $10 at the clearance store, I get a toy that’s perfectly suited for a big celebration. Shooting money in the air is a ton of fun to do and a sight to behold for those who saw it. I won’t use it often, as it’s a nightmare to clean up, but it gives me one more unique tool to make my content interesting to watch. It also makes for great GIFs and highlights to be shared outside of Twitch. As much as I want a beefier PC, the benefits of 60 fps and 1080p aren’t going to make my content noticeably better than it is now.

Everyone’s goals on Twitch are different. Some want to be the next Ninja. Others just want to play video games while offering a place for others to tune in. Whatever your goal is, work towards that and get the tools you need to build that reality. I will make the investment on a beefier computer when the dust has settled a bit during these times of uncertainty. For now, I will make it rain fake money to the delight of those watching.