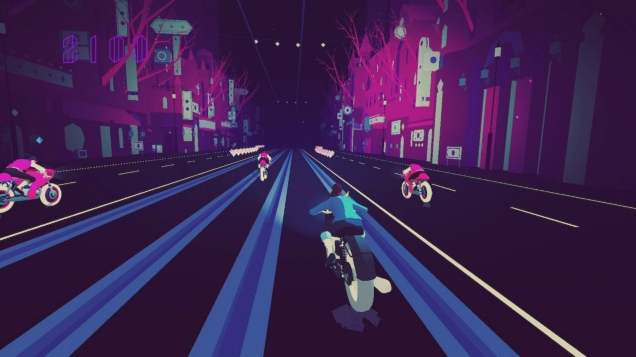 Sayonara Wild Hearts is self-described as a “pop album video game“. As you race down windy streets in your motorcycle and fly through an assortment of ethereal spaces, all of the action is driven by an awesome electro pop soundtrack.

When I go back and listen to the soundtrack, I generally just let it run from beginning-to-end and vibe to the album as a whole. Even so, I can’t help but groove to these standout tracks and levels from the game.

The title song of the album is one that is easily missed as you fly past the start screen. Make sure to give yourself a moment to enjoy this mid-tempo bop that sets the tone for the adventure.

“Yo, this song slaps!” I say to myself as I’m chasing villains on my motorcycle. Meanwhile, the song in the background depicts the final moments of a break-up.

Immediately following the slower “Clair De Lune”, “Heartbreak I” picks up the tempo with a pulsing kick drum and droning arpeggio synth notes. Adding to the track’s hypnotic effect is the in-game action as your hero soars through a heart-shaped tunnel.

The dancehall rhythm of “Forest Dub” is amplified by the actual world pulsing to the beat. In the moment, I was physically-disoriented trying to make sense of how to maneuver through this shaking landscape. Even in a game full of moments that tries to wow you with its visual and audio presentation, “Forest Dub” is the most striking of these moments for me.

“Parallel Universes” may be one of the slower tracks on the album, but it’s quite the trip in the game. Underneath its bass-heavy down-tempo vibe, the game presses you to navigate through two different dimensions that alternate after each snap.

A Place I Don’t Know

The final song of the game is the most dramatic musical shift of all. With our hero having restored harmony and finally finding peace within herself in the real world, she picks up an acoustic guitar and sings a ballad about starting anew. What a beautiful end to a beautiful game!

One thought on “Favourite Songs from Sayonara Wild Hearts Soundtrack”