No large boards. No armies of miniature figures. No handfuls of dice to chuck.

Pixel Tactics aims to bring the war to your tabletop with just a deck of cards, a fold-out playmat, and some damage tokens. How big of a battle can you possibly be in for?

In this two-player strategy game, each player manages their own army through a 25-card deck. Both sides have identical cards, but that doesn’t necessarily make for a stale battle. In fact, there are numerous mechanics in place to keep things interesting.

At the core of this variety are the cards themselves. While both players have the same cards, the deck is shuffled at the start of the game and players draw a hand of five. Throughout the game, each player will have access to different cards.

More importantly, every card can be used in multiple ways. Information is printed right-side up and upside-down to denote the ways in which you can use any given card. At the start of the game, you’ll play a card upside-down in the middle of the second row that represents your leader unit. Each leader has very strong powers that can dramatically shift the strategy for both sides. However, the game ends when one leader is defeated.

Flipped the other way, you have many more options. You can place that card onto the battlefield as a standard unit. You can place a unit anywhere you want, but their abilities will vary depending on which row you place them in.

For example, if you place your Healer in the Vanguard (front) row, they have the ability to intercept long-ranged attacks and they take two less damage from all incoming attacks. This makes them a great choice for protecting the leader. When placed in the Flank (middle), they can remove up to four damage from a hero. Could be used to heal the leader or save another unit from death. Finally, when placed in the Rear row, they can heal up to two damage each from three different heroes. Another great option, but cards can only trigger the action connected to their position on the battlefield.

Furthermore, you can use one of your two actions on a turn to play a card from your hand as an Order. Denoted by the action in the purple rectangle, Orders trigger incredibly powerful effects, but are one-time use. The Healer’s Order is that they can remove up to 10 damage from heroes, divided up however you like.

At any given moment, you will have a myriad of options at your disposal. During our first game, this was admittedly a bit overwhelming. But after one practice round, we were able to have a more spirited battle where we made better use of our positioning and maneuvers. With all of the different things one can do at any given moment, each battle poses new opportunities and challenges to work through.

As the battle evolves, even more considerations need to be made. When heroes die in battle, their corpses remain on the battlefield. Enemies can pass by corpses and attack the next unit in line, which usually leads to your leader being exposed. You can’t place another unit in their place until you remove them from battle. However, removing a corpse costs an action, which then prevents you from doing something else. Being able to manage the health of your units and maintain your positioning is key to victory.

Don’t be fooled by its small stature. Pixel Tactics is a surprisingly-deep two-player strategy game. With so many different ways one can approach a battle, it punches above well above its weight. This may not be the best fit for new players as there is quite a lot to learn upfront. But if you really want to jump straight to this one, a YouTube tutorial or two should be enough to get started. 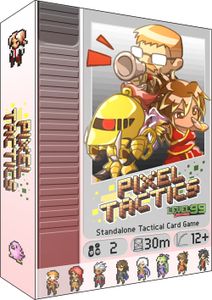