Much of my time with The Last of Us wasn’t pleasant. Granted, some of that unpleasantness is by design, since this is a survival horror game in many ways. However, some of the displeasure I felt playing the game wasn’t intentional. After starting things off with a bang, the pace drags to a crawl as it establishes its core gameplay. Worse yet for me, that gameplay is primarily stealth-based, which generally isn’t my cup of tea. On top of that, I had a hard time investing into the moment-to-moment action when the gameplay and context balance just felt off during its first half.

Having said all that, it eventually hits its stride to provide one heck of a closing act.

Before we get there though, let’s start from the beginning. In the year 2013, a viral outbreak causes humans in the US to turn into zombie-like creatures. For a while, the world is messed up as mankind struggles to fend off the threat. Eventually, those who remain live in quarantined zones where the government rules with martial law and rebels are actively trying to overthrow them.

Joel has experienced both time periods, which has mostly broken him as a man. 20 years after the initial outbreak, he doesn’t really care about much of anything. Even after being assigned to escort Ellie from point A to point B, he still shows little in the way of care for anything or anyone. The feeling is mutual for her, as she doesn’t really care for him, either. 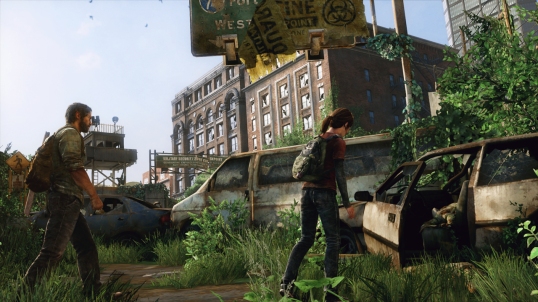 The story of these two survivors trying to get by is masterfully put together. Ellie as a strong-willed teen who never got to experience life before the apocalypse is fascinating throughout and easily likeable. Joel is divisive at best, though that’s by design. He’s been through some things that have warped the way he lives his life and I’m glad that his decisions aren’t necessarily the ones I would make.

When these stories play out in extended dialogue sequences or cutscenes, the end result is awesome. However, I felt that the game had a hard time making the context and the gameplay fit together, especially in the first half. After the dramatic info, you’re all of a sudden dropped into an area with chest-high walls strewn about and asked to stealthily sneak through. It’s a jarring transition into the ‘gamey’ portion of the experience. Also, the context behind my actions in these sequences didn’t always connect for me in a way that got me invested in the on-screen action.

I don’t feel like the game got this mix right until its second half, where things really get kicked up a notch. Without spoiling anything, the game puts you in a specific scenario where everything just made sense for me. While I was simply going through the motions to get to the next cutscene before, by the time this moment happened, I was all in. I hate stealth as a gameplay mechanic, but when they got the mix of context and action right from this particular point onward, the experience became much more entertaining.

That upward arc in gameplay enjoyment perfectly synched with the story reaching a crazy crescendo to provide an experience that shook me to the core by the end of it. I wish that the first half of the game could have been a bit tighter, but that almost doesn’t matter based on the buzz it created within me when the credits rolled. Had I given up when the game wasn’t doing it for me, I would have missed out on something really special.

Buy The Last of Us Now On Amazon.com

2 thoughts on “The Last Of Us Single Player Review”