It’s easy for me to romanticize about the glory days of Rock Band. From the hundreds of songs I’ve purchased, to the countless number of hours I had playing that series with friends, to the way the games inspired me to start learning real instruments, its influence on my life can’t be ignored. As much as I adore that franchise, there are reasons why I – and many others – abandoned the entire genre years ago and haven’t really looked back.

Are people ready for the return of Rock Band? Am I ready for its return? Whether we’re ready for it or not, Rock Band 4 is here, hoping we’ll all get our bands back together.

This release marks the debut of the franchise on the current generation of consoles. Making the transition is a scary proposition, as many players have instruments and downloaded songs tied to their Xbox 360 or PlayStation 3. Thankfully, Harmonix has gone a long way towards making this jump a smooth one. On the PS3, all of your old instruments work just fine. On Xbox 360, you’ll need a legacy adapter to get your old wireless instruments to talk with the Xbox One. This can be bought separately, or as part of a bundle with the game. If you still have the old Rock Band 1 wired instruments, you’re unfortunately out of luck. I’m using Xbox 360 instruments with the game and they work as well as they ever did.

DLC songs also make the jump with a few caveats. For one, certain songs won’t make the transition due to the rights expiring. On my list, that means all my songs from Journey and Metallica have to be left behind. Also, there are no disc exports as of yet, though Harmonix has promised that those will be available in the near future. Still, for people like me, it’s comforting to be able to have the majority of my songs on the new system. Moving all of the songs one-at-a-time is a pain, but it’s worth the hassle.

Rock Band 4 isn’t just about making the old experience accessible though. The core game brings forth 60+ new songs for us to play with. A variety of different musical styles are represented, though there’s a heavy slant towards songs released in the last five years. Considering the fact that the series has been dormant during that time, it’s understandable that they’d want to focus on the music they missed. While I’ve always appreciated Harmonix’s commitment to stylistic variety, it also always leads to a scenario where most people (including yours truly) won’t like a large portion of the songs on the disc. For those new to the series, purchasing some DLC to round out your collection is highly recommended.

Unlike Guitar Hero Live, which dramatically shakes up its formula with a brand new six-fret guitar, the gameplay improvements to Rock Band 4 aren’t as revolutionary. They do, however, add varying levels of additional enjoyment to each instrument. For singers, every past and present song that had harmonies in the vocal tracks now features Beatles: Rock Band style harmony support. Considering the fact that the Rock Band library features thousands of songs, adding in the functionality now is quite the feat. I love having the option of plugging in two more microphones and trying to sing all of the different vocal lines with others, even if we’re terrible. 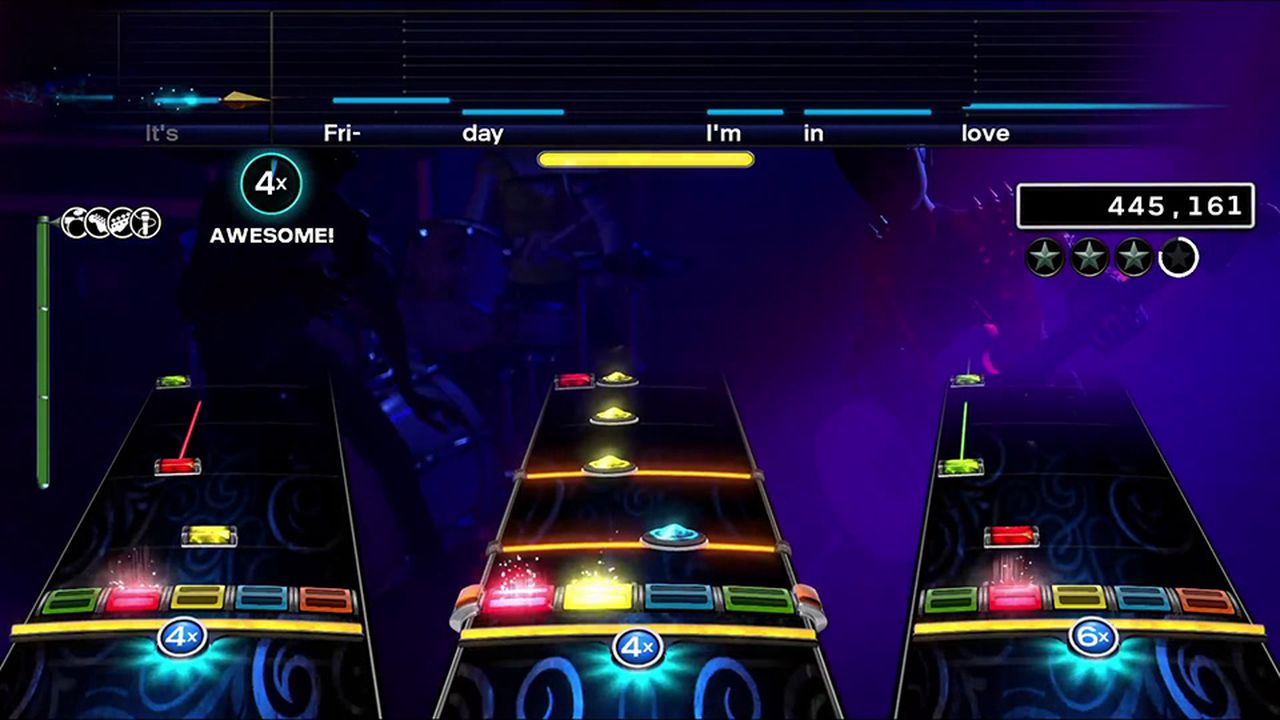 Another big change to the vocals is the inclusion of Freestyle Vocals. In the old games, you had to sing the song exactly as it was sung in the original recording in order to get points. Here, the system is a bit more fluid, allowing you to get points for your own interpretation of the song as long as you’re on key. In cases where the song is uncomfortable to sing, or if you want to improvise a bit, you now can do that without getting punished.

Guitar has seen the most dramatic change, as Freestyle Guitars dramatically change the way that solos work. Through some technical magic, you can create your own guitar solo by playing the notes however you want. The on-screen highway shows some general guidelines on how to make the best-sounding solo during each section, but you can play or not play however you like. 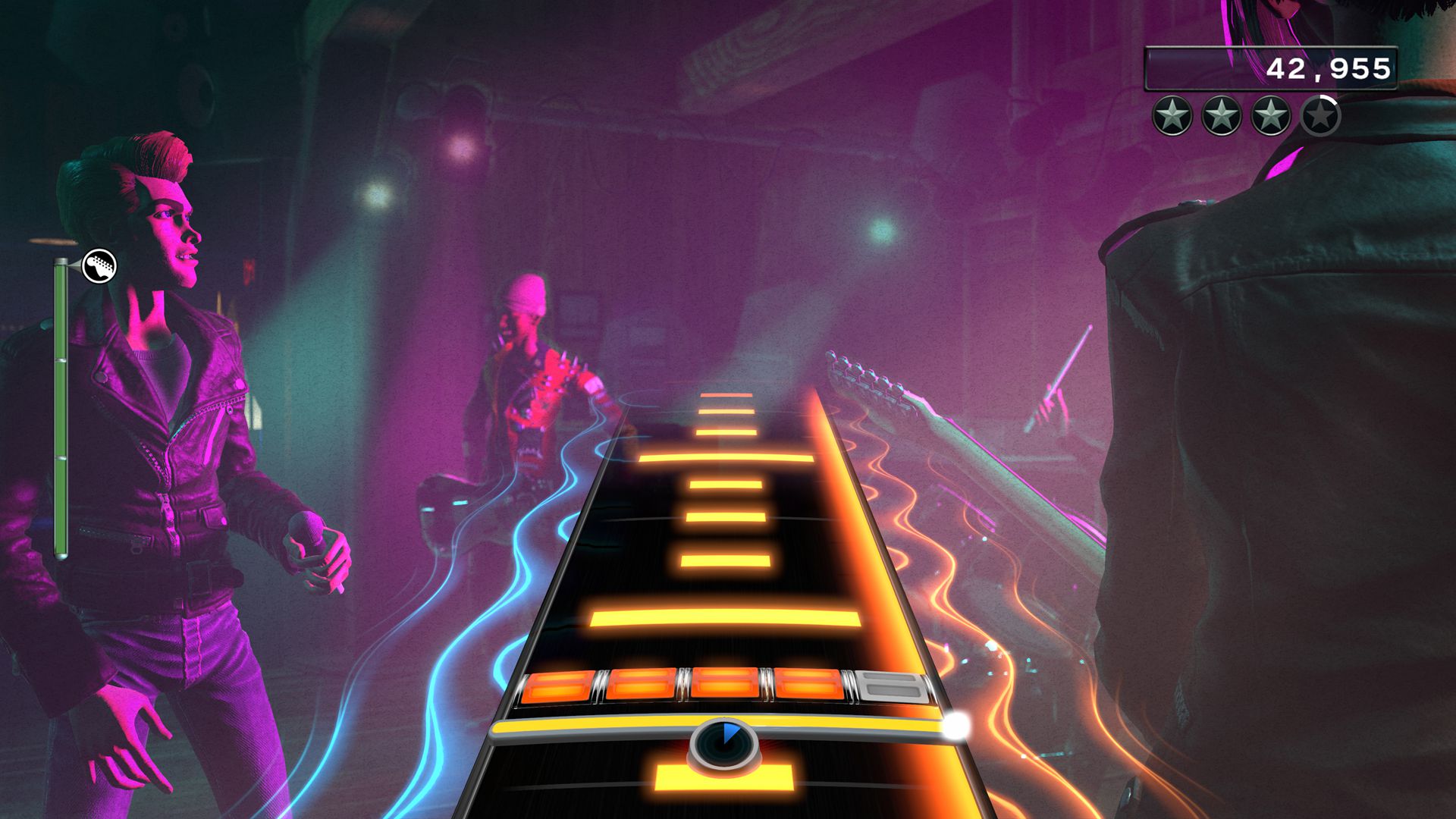 Turning on Freestyle Guitars immediately reduces the difficulty of a song by replacing the hardest parts with improve sections. That may or may not be a plus depending on your stance on difficulty. What it also does is put the dependence on you to create a guitar solo that doesn’t suck. While it is certainly possible to create cool solos, it’s much easier to make something that sounds horrible. Whether you decide to play with it on or not will be a matter of preference more than anything. Personally, I keep it off.

If you’re still clinging to your keyboard from Rock Band 3, I’ve got bad news for you. The keyboard did not make the transition to current gen consoles. Don’t think this will affect that many people, but it does suck to see the package get slimmed down.

Speaking of, there are some other big omissions to Rock Band 4. Online play wasn’t something I took part in that often, but that’s gone. Leaderboards for each song are also absent. Most egregious is the exclusion of practice mode. After getting stumped by the ending drum sequence of “Uptown Funk”, I was really disappointed that the option to practice that specific part was gone. Hoping that it gets patched back in at some point, but its absence is sorely felt.

What is left is quick play, play a set, and tour mode. Quick play lets you play one song at a time. Play a set is my favourite, as it allows bandmates to quickly vote on song suggestions between songs to keep the party going. The tour mode is the game’s main campaign that can be played alone or with friends. You’ll work your way through assorted sets, touring around the world, gaining money and fans along the way. There are some choices to make along the way, though the mode is a fairly straightforward way of playing through your songs in a structured manner.

Did you miss Rock Band? If you did, even a little bit, playing Rock Band 4 feels like snuggling up in your old favourite blanket. I may not be as sharp as I used to be on the drums or guitar, but the joy came right back. This doesn’t have all the trimmings of Rock Band 3, which is going to sting for the fans who never left, but the benefits of getting the experience and all of your DLC on a modern console outweigh the cons for now. I don’t think this is enough to ignite the world in the same way the old games did, but those that choose to return the stage will have a great time rocking out again.