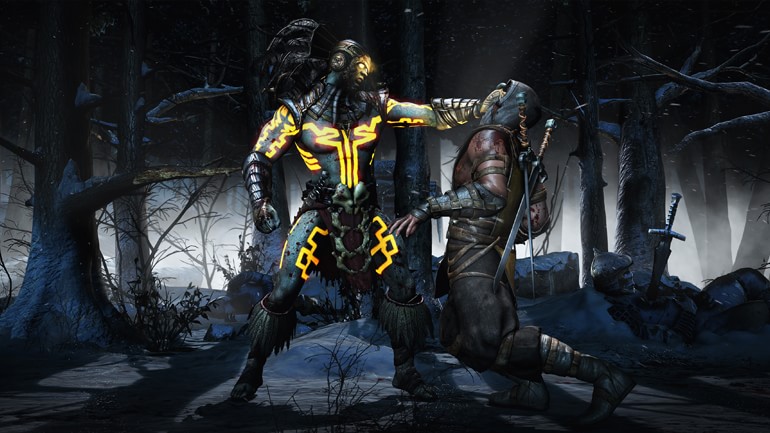 After floundering for years, Mortal Kombat got its groove back in 2011. Great graphics for the time, a switch back to 2D fighting and a well-refined battle engine made it a worth rival to the likes of Street Fighter IV and Marvel vs. Capcom 3. Not willing to rest on its laurels, Mortal Kombat X is bigger, bolder, and better than its predecessor in almost every way.

For me, the joy of modern Mortal Kombat comes from its combat, er, kombat engine. Unlike Street Fighter IV, where performing a cool-looking combo takes a great deal of effort and practice, cool combos in Mortal Kombat X are generally easier to perform. By mixing in preset combo strings with special moves and a lenient juggle system, you can create an offensive symphony in a much shorter span of time and practice. Not to say that the game runs in baby mode by any means. There’s still a lot of nuance in terms of timing and making contact with a defending opponent that will keep players of all skill levels hooked for a long time.

One of the big new additions to the combat is the inclusion of stage interactions. Similar to Injustice: Gods Among Us, kombatants can now use stage elements to attack their foes or slip out of a sticky situation. For example, there’s an old lady in a market that you can just throw at an opponent if you want. Really enjoyed that element of Injustice and I’m glad to see it here. The best part about it is that they’re all blockable now, which wasn’t the case in the DC fighting game.

Of course, the game also has a whole host of Fatalities, which are as gory as ever. One thing that might rub players the wrong way is that you don’t get access to all of your Fatalities at the start. Instead, you have to unlock them with coins, which are earned with play. They probably are also sold as DLC. Fatalities were never really my thing, so I’m fine with that.

The biggest addition of all is the concept of character variations. While the game already sports a huge roster of old and new characters, each character has three different variations to choose from. They all vary in different ways, some more dramatic than others. For example, Kitana has a variation that gives her Jade’s staff and all of her moves. It’s a great idea to have different variations of the same character, as it can help characters counter bad match-ups.

One of the modes I loved in Mortal Kombat 9 was its story mode. As a re-telling and revamping of the original Mortal Kombat story, it was very cool to have that presented in a modern context. In this game, it’s an all-new story that I couldn’t force myself to sit through. Part of it is because I just don’t have the patience right now to play and learn every character in the campaign. The other part is I don’t have any interest in this all-new story they’re telling, which focuses on the new era of kombatants.

Without that, there’s still stuff to keep players interested. Solo players have an assortment of fixed and variable towers to work through. Online warriors, meanwhile can take part in an assortment of modes. While my fights were generally smooth, many of my matches suffered from input lag. It does interfere with the game to the point where you don’t play it like you would locally, as you have to dial in everything quickly and hope it actually registers. Also, there were times where things completely fell apart, and matches would freeze for a second before slowly chugging along. Thankfully, NetherRealm is updating the game will rollback netcode, which should go a long way towards improving the experience.

In a post-Street Fighter V world, Mortal Kombat X doesn’t back down. This gorgeous fighter refines its formula even further to be the best game in the series. It’s a bummer that the campaign isn’t as appealing as the last one, but players who still want that experience should still have a good time with it. The online play today isn’t great either, but a fix is on the way. Once the rollback net code is patched in, it has what it takes to truly go toe-to-toe with the new champ, while still surpassing it in terms of content and ambition.