Since the price hike, video game companies have shifted their release schedules. Tuesday used to be the launch day for most games, but now it’s Friday. Due to the logistics that come with mailing packages, there’s a decent chance that it won’t make it on the day of. But when it fails on Friday, it probably won’t make it on Saturday or Sunday, either, forcing me to wait till the following week to get my stuff.

But I can wait a weekend, right? Under normal circumstances, maybe. For the past five (!) games I’ve ordered online, it’s been worse.

The first was a trio of pre-orders for Far Cry 5, Detroit: Become Human, and Spider-Man. All three games were $30 off per game. I ordered them from a major brick-and-mortar retailer who also happens to have an online presence. However, when my wife and I were caught off-guard by our landlord selling off the condo we lived in, this particular retailer refused to allow me to change my address because my order was “processing”. In the case of all three games, they were all many months away from being shipped, so I have no idea what the hold-up was on their end.

I paid for a mail redirect service from our national postal service to get those packages delivered to my house instead. But when the first package showed up at my old condo, I found out the hard way that this service no longer accounted for packages. Great. In the case of Far Cry 5 and Detroit: Become Human, I had to go out of my way to travel to my old condo to intercept these packages from front desk before the new tenants could get them.

In the case of Spider-Man, I was too late. This then required me to make a series of phone calls to my real estate agent and the new tenants’ real estate agent (who turned out to not be their agent after all), before desperately leaving a note on the mailbox with my phone number in order to coordinate an exchange. In all of these cases, it’s the retailer’s fault for refusing to change the address on orders that wouldn’t be ready for another few months. 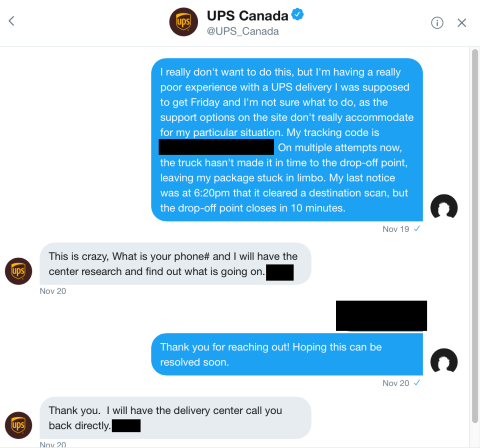 Then there was Pokemon: Let’s Go Pikachu. Due to a messy strike by our national postal service, this retailer chose to ship through UPS. Due to their requirements for a signature on pick-up, I changed my settings so that the delivery truck would drop it off at my local waypoint and I’d pick it up after. The truck failed to make it to the waypoint before it closed on numerous attempts before finally making it there almost a week later. UPS doesn’t actually have a mechanism to file these types of complaints, so I reached out through Twitter. Though they did acknowledge the issue, there wasn’t any action done to expedite the process. The truck driver just happened to make it to the drop-off point in time on the fourth or so attempt.

….can I just drive to the distribution centre and pick up my copy of Super Smash Bros. Ultimate instead? 😦 pic.twitter.com/UVgTsO2Yf5

Now it’s Super Smash Bros. Ultimate. This online retailer chose to go with Canada Post during a blip in time where it seemed like the strike would be over. However, employees are resisting the government mandate to go back to work. As such, my copy’s delivery date has already slipped numerous times. It’s going to be a week late at best, assuming the strike doesn’t impact my shipment any further.

Sure, I will have saved over $100 by buying this way. But across all of these games, I’ve lost weeks of time playing them. At least $100 on a mail-forwarding service that didn’t work as intended. Five-to-six out-of-the-way trips to my old condo. Numerous awkward phone calls with strangers. Last but not least, over a year of grief and headaches from trying to wrestle with the stress that has come with each situation.

I get that I partially suffer from an incredible combination of bad customer service, incompetent shipping, poor timing, and bad luck. But when I think about all of the hurdles I’ve gone through in order to save a few bucks, was it worth it? Probably not. Will have to rethink my online buying strategy if there’s so many points of failure, all of which have failed on me this year.

🚨STREAM HYPE!🚨
Finally got all of the Eeveelutions in VMAX form! Which one is your fave?
I continue to be floored by your support for my Pokemon content! Warms my heart to know that this work is inspiring you and others to be the very best like no one ever was 😍. Thank you!
🚨STREAM HYPE!🚨
Turn 1 victories rarely happen in the Pokemon TCG. But when they do…
🚨STREAM HYPE!🚨