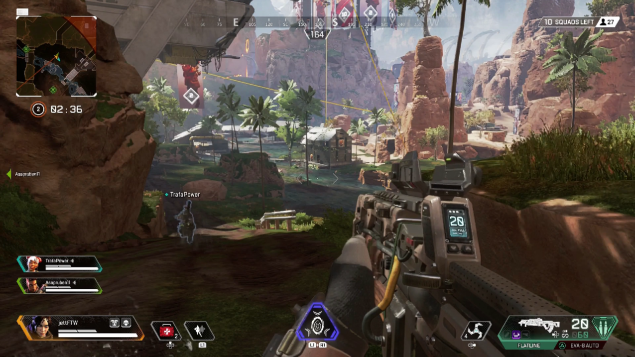 Apex Legends is a squad-based battle royale game where 20 teams of three fight to be the last team standing. Immediately, it’s hard to not fixate on the total number of combatants, as this game “only” offers 60-soldier battles, while many other games in the genre use a player count of 100. Also, there are no solos or duos here, just teams of three. 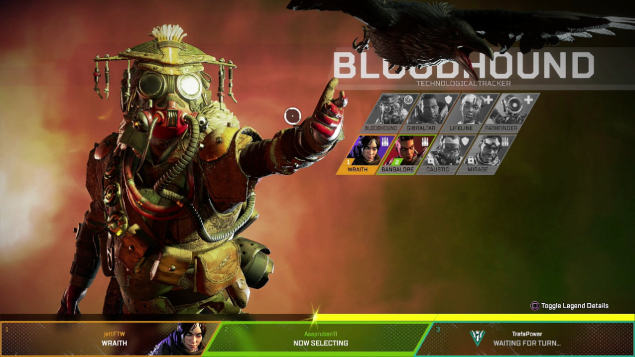 In exchange for being tied to a three-soldier squad, there’s a few more wrinkles to team play. Instead of everyone playing as the standard-issue soldier, there are eight different character classes to choose from. Didn’t play enough to see the differences in each, but they do have unique Ultimates. The main soldier class for example, can call in a supply drop. Will need to play more to determine how much this impacts the action, but in a three-person squad, having a set of soldiers whose abilities compliment each other could prove beneficial.

Another way in which the team aspect plays a bigger role is in the way it handles death. When you get eliminated, you’re not necessarily gone from the game forever. You will drop a flag when shot down, which your teammates can pick up and take to a respawn station. If they’re able to cash it in, you’ll be revived. Of course, that means they need to put themselves at risk by getting your flag, possibly going out of the way to find a revive station, then wait for you to respawn. I like the idea of being able to come back to a match, and so far I didn’t feel that it made matches run too long.

What’s really stood out to me thus far is the game’s overall presentation. Sharp graphics and fluid animations make this look a cut above from the battle royale games I’ve played to-date. I also appreciate the overall feel of movement and combat. Considering that this is developed by the folks who originally created Call of Duty, it’s no surprise that the gun-feel is on point. I wish they were able to find a way to incorporate more Titanfall-specific mechanics, such as the giant mech suits and double jumping, but the action still feels great in its current state.

Roughly 24 hours into the life of Apex Legends, it’s difficult to pass any sort of final judgment. What I can say is that I really enjoyed what I played. Really enjoy how the game looks and plays, even if the three-soldier squad aspect can be overly rigid. While I bounced off of Fortnite and Blackout mode in Call of Duty: Black Ops 4 fairly quickly, I’m looking forward to playing more of this one.