Even before Super Smash Bros. Ultimate hit the scene, the fighting game market was getting pretty crowded on the Nintendo Switch. From the Street Fighter 30th Anniversary Collection, BlazBlue: Cross Tag Battle, ARMS, Dragon Ball FighterZ, to the slew of classic Neo Geo fighters in the eShop, getting your pugilistic fix wasn’t much of an issue.

One of those pre-Smash titles that jockeyed for position was Blade Strangers by Nicalis. With a roster comprised of indie game characters from different franchises, it aimed to carve a niche for itself with a unique roster and a streamlined combat system. Does this fighter have the chops to stand as a worthy challenger?

What first caught my eye about this fighter was the inclusion of Shovel Knight on its 14-character roster. Unfortunately, he’s far and away the most popular character on this supposed clash of indie all-stars. No offense to The Binding of Isaac or Cave Story, but odds are the remainder of the cast will be completely alien to you. That’s not inherently a bad thing, but you’re getting an uneven roster of mostly characters from games you’ve never heard of. 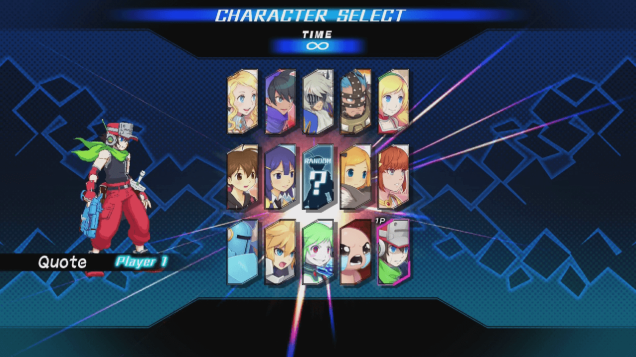 Though these characters come from disparate universes, everyone is rendered in a unified 2D anime style. Shovel Knight looks a bit weird at first glance, as he’s no longer a squat 8-bit sprite, but I’ve warmed up to his look. Issac from The Binding of Isaac though stands out like a sore thumb due to his inherent character design and short stature. Overall, the game looks decent, though the graininess of the character sprites is noticeable when playing the Nintendo Switch version in docked mode. This is similar to the issue I noticed with BlazBlue: Cross Tag Battle. Doesn’t impact gameplay, but you can see a clear difference between the somewhat-pixelated sprites and the sharp backgrounds. On top of that, compared to other anime fighters on the market, this one does lack in visual flair.

Using an anime-style fighting game engine as its base, Blade Strangers tones down some of the wackier elements that are synonymous with games like Guilty Gear or Dragon Ball FighterZ. Only one character in the game can air dash. Also, there are systems in place that prevent characters from repeatedly smashing you with seemingly-infinite combos.  Furthermore, the game is devoid of Street Fighter style special move inputs. Instead, everything is done with a direction and a singular button press, a la Super Smash Bros..

It’s an interesting approach that tries really hard to find the right balance between flash and accessibility. Newcomers can pick up the game and perform basic combos with a few simple button presses. For hardcore players, there’s still room for more advanced combos and tactics.

During my first few hours with the game, I thought it was overly rigid. However, I warmed to it a great deal once I started to put Offensive Skills and EX moves to great effect. Offensive Skills are like Roman Cancels in Guilty Gear, allowing you to negate the recovery on a move while also dashing forward for better positioning. You can even use this Offensive Skill to perform a short striking air dash, allowing you to continue your assault from the sky. EX moves often add additional properties to your special attacks, such as ground or wall bounces. Even with the game’s simplified controls, it’s going to take some work for experienced players to squeeze out everything the game has to offer.

In terms of feature set, it checks off the basics. You get a standard arcade mode, though there are no unique character endings within it. There’s a story mode that attempts to explain the rationale behind all of these different game franchises merging together. Anime tropes abound, which I personally find extremely cringe-worthy, but BlazBlue: Cross Tag Battle is no better in this regard. Worth noting here that you can’t play as any of the non-Nicalis characters in the story mode, including Shovel Knight unfortunately.

You can play the game online as well. That said, I was unable to test it. At this point, the community has dried up to a point where you can’t just hop online and play. You’ll want to either coordinate with friends or others through Discord to get some matches in.

Blade Strangers finds a way of providing the thrills of an anime fighter without drowning players in a sea of complex inputs. I’ll probably continue to mess with this one from time-to-time, as its simplified controls make it a good fighter to play in portable mode on the Nintendo Switch. However, its roster is sorely lacking star power, even within the indie niche it’s targeting. Furthermore, in the face of titles like Dragon Ball FighterZ and BlazBlue: Cross Tag Battle, this one falls short on the presentation scale, even relative to its lower price point. On the other end, a game like Pocket Rumble is considerably cheaper while also finding a similar balance between accessibility and depth. Blade Strangers is a good game, but its incredibly niche appeal will make it tough to stand out.