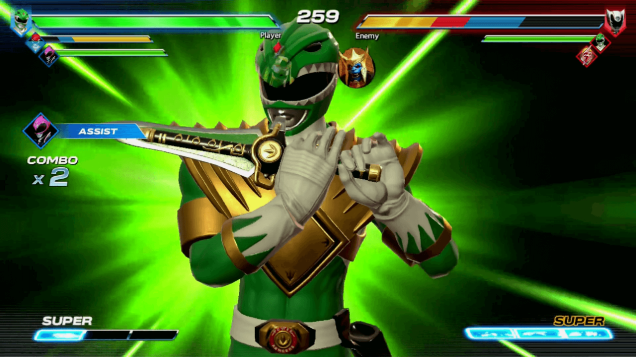 For a franchise rooted in hand-to-hand combat, you’d think that the Power Rangers would have a larger foothold in the fighting game space. Save for a bad SNES fighter with the most legendarily overpowered fighting game character of all-time and a mobile game that I think is doing well, they generally steer clear of the genre that probably makes the most sense.

Finally, the world is getting a Power Rangers fighter in the modern era. Published by nWay Games and developed with the help of professional fighting game players Clockw0rk, ShadyK, and Justin Wong, Power Rangers: Battle for the Grid aims to provide the thrills of a Marvel vs. Capcom style fighter at a fraction of the price.

Getting a new tag fighter at this budget price is a rarity. Once you dig into the actual package though, it’s clear to see where the concessions were made. At launch, the roster is only nine characters deep. I love that Jason and Tommy from the Mighty Morphin’ era are here, but they will wear out their welcome very quickly with a roster size this small. Paid DLC characters are on the way, but as of writing, we don’t know how much they’ll cost or when they’ll be released.

Power Ranger: Battle for the Grid has a lot of potential, but the game in its current state is really thin on roster size and modes. Have also run into some unfortunate bugs. Hope we see the package filled out and cleaned up cause the combat is a lot of fun! 🎮 🥊 #videogames #fightinggames #powerrangers #powerrangersbattleforthegrid #combo #nintendo #nintendoswitch

Won’t take long to dig into the menus, because the game at launch doesn’t have much to offer. You get a standard Arcade mode where you fight your way up the ladder to a final boss. Though there is a “cutscene” or two along the way, there are no endings and no real story to the action. The developers have promised that a proper story mode is on the way, but it isn’t there now.

In a budget title, I would be content with just an Arcade mode. However, this Arcade mode stunningly doesn’t have adjustable difficulty settings. For a game already light on modes, not having difficulty settings further hampers the experience unless the default difficulty just so happens to provide the right amount of challenge for you. 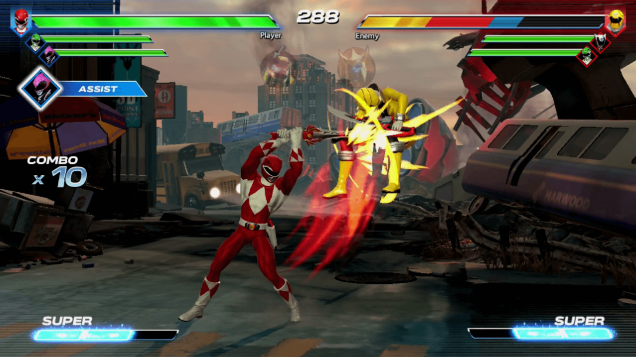 Thank goodness it at least has casual and ranked play. Though one of my matches ended mid-fight due to a poor connection, battles ran fairly smoothly. Unfortunately, the game didn’t launch with lobbies, making it virtually impossible to match up with friends. nWay has stated that lobbies will arrive as part of a future update. At launch, a terrible glitch actually made it impossible to block low, essentially making the game unplayable. However, by the time you read this, it may have been fixed with a patch.

You also get access to a training mode and tutorial. Oddly, once you’re in the tutorial, you can’t go back to the character select menu. You have to quit the game and re-enter training mode. Also, the tutorial is paltry. You learn the absolute bare minimum, while also not showing players what makes the game special.

Power of the Grid uses Marvel vs. Capcom as a template, but deviates from it in notable ways in order to create a more accessible fighter while still giving hardcore players new mechanics to master. Fought on a 2D plane, players will take control of one of their three team members at a time, while being able to summon the others to hop onto the battlefield to perform an assist move. When used in tandem, you can create wild combos, tricky mix-ups, or a seemingly impenetrable wall.

One of the ways in which the game simplifies its action is that it doesn’t feature Street Fighter style special move inputs. Instead, the game implements a special move button like the Smash Bros. series. Pressing the button with a forward, back, or neutral direction will trigger a special move. You can also hit the button to perform a mid-air special.

Players will also get access to multiple auto-combos. By mashing out one of the three attack buttons, you’ll perform a combo unique that button. For newcomers, the combination of one-button specials and auto-combos is a good start.

But where the game truly shines is when you take off the training wheels and explore the game’s combat systems to the fullest. You can create stunning combos that launch your opponent into the air multiple times, while weaving in assist and super moves. You can call both assists at once for extra pressure, or call one after the other while jumping over your opponent to have them attack from both sides.

The most innovative part of the game’s tag system is that you can instantly take control of the assist during their move. Out of nowhere, you could be attacking with your point and assist characters at the same time, only to suddenly take control of the assist and land a hit from an angle your opponent wasn’t expecting. Heck, you can even weave Megazord assist moves into that mix, creating an onslaught of destruction from every angle. Unless you’re a fighting game junkie and are willing to do the homework, you would never know this game had that type of depth due to how poorly the game demonstrates its systems.

But even within its strongest aspect, there are still glaring holes. There’s a glitch where if your point character dies while the assist character is out, the assist stays on-screen indefinitely, even after your opponent has pummeled their life to zero. Also, while the game has measures in place to limit infinite combos, it hasn’t stopped players from finding some really cheesy loops that can lead to 100% damage. After some patches, we’ll see if that type of stuff gets addressed, but it’s a shame that stuff like this didn’t get squashed in testing.

Power Rangers: Battle for the Grid got the most important part right. It’s an entertaining fighter in the style of Marvel vs. Capcom that actually has the chops to be played at a competitive level. Unfortunately, it’s clear that this game came out of the oven way too soon. I’m somewhat okay with the small roster size at this price, but the bare bones feature set and inexcusable bugs that impact gameplay makes it feel like an early access product. Fingers crossed that this one will be ready for the big leagues after a few patches, but it’s hard to recommend today.