As part of my overall streaming redesign, the space that I play in has become an integral part of the viewing experience. Starting out with just a Snorlax beanbag chair on the floor, I’ve since decked out the wall behind me with decor that reflects my interests and life experiences within and outside of gaming. Always get a kick out of eagle-eyed viewers commenting on the wall, whether they have a shared appreciation for a piece or have a question about something on display.

Every few weeks, I swap in a few new pieces here-and-there. Partially because I want to get use out of the many pieces that have sat in storage since we moved into this house, and partially to keep the backdrop fresh for viewers. This time around, the wall has gone through its most dramatic shakeup yet. 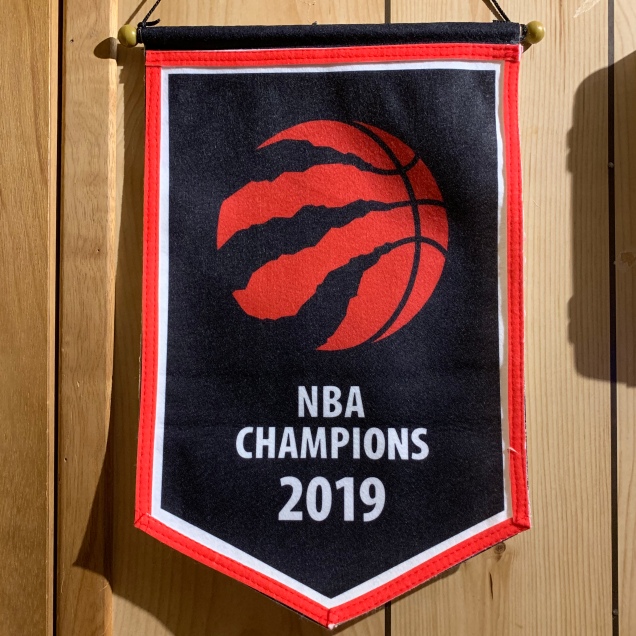 I’ll probably forever be devastated that Kawhi Leonard chose to leave Toronto. However, as Kobe Bryant once said, “Friends come and go, but banners hang forever.” To commemorate my Toronto Raptors winning their first NBA championship this year, I just had to have a banner of my own. I don’t see myself ever taking this one down.

Back in 2016, I won the WorldGaming Street Fighter V regional championship in Kingston, Ontario. Before heading off to Toronto where I would finish 17th in the national finals, I was rewarded with this commemorative karate gi. Featuring the Street Fighter V logo and the name of the city on the back, it’s a one-of-a-kind trophy that may be the single coolest piece if gaming memorabilia I’ll ever own.

Thanks to my sister-in-law, she provided me with the shadowbox and the art on the front. From there, I added the karate gi, headband, belt, and tags I wore throughout both tournaments. Overjoyed to finally have this piece on display! 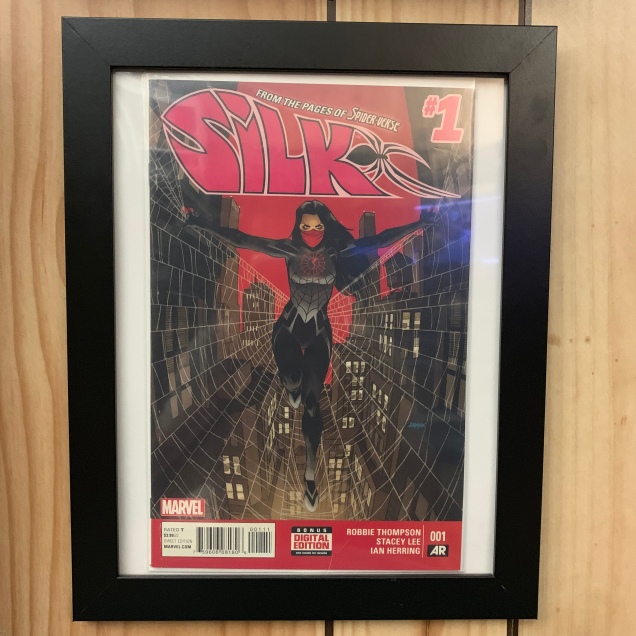 Before being overshadowed by Spider-Gwen, Cindy Moon aka Silk was the hottest new hero in the Spider-Verse. Having been bitten by the same spider that gave Peter Parker his powers, Cindy was kept in captivity for many years before finally escaping. Towards the end of my comic run, the Silk series was one of my faves, with this first issue in her own series acting as my introduction.

Over the course of our two-week vacation in London and Paris, we visited a number of different museums and got to see some of the world’s most iconic paintings in person. One of those being Leonardo da Vinci’s Mona Lisa. Getting a copy for myself was not only a great souvenir, but also an eye-catching addition for viewers. I also bought a few prints of Monet’s work that I’m excited to share with you when the time comes!

Years ago, this poster was used as wrapping paper for a present I received. While I loved the gift, I preserved the poster as best I could and framed it because it’s cool album art from one of the greatest rock acts of all-time. Will admit that I discovered the title track through a John Mayer cover, but Jimi’s original is a fantastic song that I may have missed without the cover.

Didn’t intentionally plan on showcasing two Spider-Verse comics at once, but I had to hang this up when I dug it out of storage. Besides being one of my fave comic covers ever, it’s part of an amazing Spider-Man arc where he’s bested by Kraven the Hunter. My copy of it is in rough shape, but I’m glad to have any copy of it to proudly display in my room!

Adding the banner and the karate gi forced me to rejigger the entire wall, but I think the effort was worth it! Will continue to swap different pieces in so that we’ll always have something fresh to enjoy! How do you decorate your gaming space?