From Monopoly: Millennial Edition to Game of Life: Quarter Life Crisis, Hasbro has been updating its classic board games with parody versions meant to appeal to young adults in modern times. One game in the series that I couldn’t pass up was Mystery Date: Catfished. Putting an online dating spin to the legacy title, will you swipe right on your future soulmate?

The original Mystery Date is a game where players win the game by dressing appropriately for the right date. For example, you’ll collect three cards for a prom outfit and hope the guy at the door is also dressed for the prom. If you match, you win! If you two don’t match, you’ll have to try again with a new set. Be careful though, as opening the door to the nerd will force you to discard all of your outfits. Bummer!

Using the original Mystery Date as its base, the game makes a number of thematic and gameplay changes to work for modern times. For one, the original had players take on the role of women getting dressed for their male dates. With Catfished, the player’s gender isn’t specified. Instead, you each get to choose one of many different online profiles for characters of both genders. The game completely avoids boxing players in, making it a more inclusive experience. 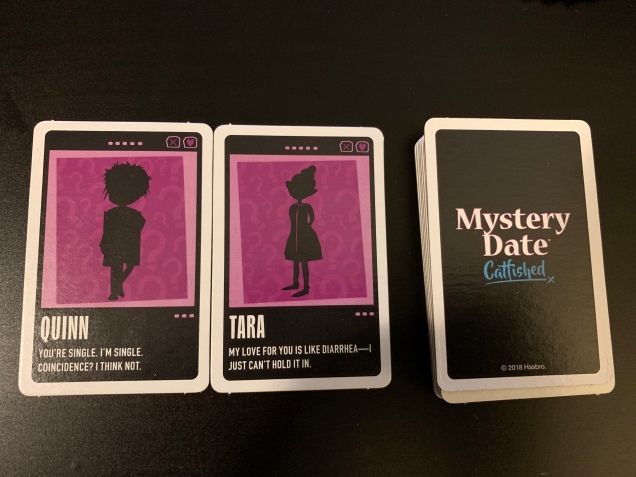 Instead of collecting three pieces of an outfit, players are now trying to collect three trait cards that feature matching colours. Each card of a type indicates you getting to better know your online crush, though none of these traits are particularly desirable. Do you want to date someone who is a compulsive liar, poops with the door open, and identifies as a wolf? If all three traits are represented by the same card colour, congratulations! Your date is here to pick you up! As long as it’s not the catfish, you win! You’re even treated to a cute madlib story that incorporates your trait cards, though none of the game’s date night tales have a happily ever after. Its pessimism towards the act of online dating is humourous at first, though the joke wears thin quickly.

Unlike the original, the roll-and-move aspect of the game has been completely removed. Thank goodness, as relying on the luck of the dice to dictate actions pretty much took all player agency out of the experience. Instead, the game uses a draw pile for all trait and action cards, where players will draw a a card and play a card on their turn. Giving players some control helps them get more invested in the action while picking up the overall pace of play.

That said, it still features a lot of unavoidable randomness. Attack cards from other players can wildly derail your plans, making it very difficult to plan ahead. Furthermore, winning the game even after collecting a full set is somewhat of a crapshoot. Before you open the door, you must spin the doorknob, which selects the win or fail state to show when the door opens based on where the door handle ends up. In an ideal world, this is truly random and it’s not a great way to end.

However, if you want to trigger a win every time, you can leverage a design exploit in the knob to do so. I discovered an exploit based on how the doorknob mechanism was built. There’s a crease on the doorknob down the middle, which you can use to gauge which page the door will open to. If you’re nefarious enough, you can look at what angle you need to have the doorknob tilted to in order to trigger a win state. Then when the time comes, recreate that tilt and take the W.

Even if you’re not the one spinning the handle, if that person gets the catfish, make a mental note of where the doorknob is rotated to and don’t repeat it if you get the chance. I recommend either covering up the knob or using the honour system to prevent any further compromises to the experience.

Relative to the source material, Mystery Date: Catfished is an improvement over the original. The shift towards a more inclusive approach is a welcome addition. Even if the humour doesn’t last long, the shift towards online dating makes a lot of sense in modern times. Getting away from roll-and-move also makes for a better playing experience. Having said that, its heavily-randomized nature will probably still rub many the wrong way. Also, have some sort of house rule in place regarding the knob, as reading the crease will completely kill the experience.

As a means of getting silly with friends while you immerse yourself in the online dating theme, it does the job. But if you’re actually looking for set collection games that are similar in mechanics and humour without specifically having to be about online dating, you’re likely better off with other games of this style such as Exploding Kittens, Kittens in a Blender, or Guillotine.