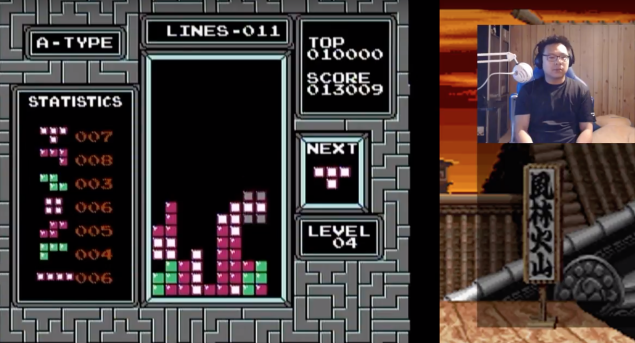 In classic Tetris, the blocks that you would receive would be completely random. Players with high stacks waiting for the I piece may never actually get it. More often though, a stretch of S and Z pieces can create a series of weird gaps.

At some point, the franchise moved away from a truly random distribution system. Instead, the game has moved into a randomization system that simulates drawing each piece from a bag. One-at-a-time, a piece is drawn from the bag until the bag is empty. Then the bag is refilled with one of each piece and the process begins anew. What this means is that you’re going to receive an even distribution of block types during every cycle. It also means that you’re never going to get the same piece three times in a row.

I much prefer the bag system of the modern games over the truly random distribution of the old games. For players who keep tabs on the draws, you’ll have a better idea of what’s coming next and what you’re going to be waiting a while for. It also limits RNG from completely screwing you over.

One of the ways in which classic Tetris was unforgiving to its players is that you were forced to place the blocks that the game gave you, regardless of how neatly they may fit into your current stack. Again, RNG could completely burn you by serving you with bad pieces.

Introduced as part of The New Tetris, the Hold system allows players to store a piece and play the next one instead. You can use this “defensively” as a means of avoiding the use of a piece that would worsen your situation. Or, you could use it “offensively” to bank that legendary I piece.

As with the bag system, I really like the inclusion of this mechanic. It minimizes the impact of RNG on the game, while giving players a bit more strategic control.

My understanding of the history behind T-spins is a bit hazy. I think at the very least, some permutations of the T-spin maneuver where you twist a T block into place has always been a part of the game. However, in more modern Tetris games, players are given certain rewards for completing T-spins.

As an example, in Tetris 99, when you clear four consecutive rows with the I piece, you’ll send four rows of junk to an opposing player. However, you can also send four rows of junk by completing a T-spin double, where you clear two rows by spinning a T block in such a way that it clears two rows. This allows you to send just as much junk while using less blocks. However, it can be tricky to set up this maneuver consistently.

I find the act of twisting a T block into a space is a bit hokey. It’s always looked odd to me, especially during incredible moments where players are able to create T spin triples. I think that the community fixates on the technique a bit too much, as you can get incredibly far in Tetris without ever engaging with this maneuver. However, it does deserve credit for adding a level of depth to the game for the highest-level players to create more offense with fewer blocks.

Easily the most dramatic and controversial change to Tetris is the inclusion of the infinite spin. In classic Tetris games, blocks lock into position as soon as they make contact with the ground. Newer games introduced a mechanic called Infinity that allowed blocks to spin on the ground forever.

The mechanic looks ridiculous and actually broke Tetris in its earliest form when you actually could spin blocks forever. Since then, the mechanic has been refined to limit the amount of spins and moves a player can make before a block sticks.

Once the game hits a certain speed, blocks will instantly touch the ground, giving you no real opportunity to maneuver them mid-flight. At this point, your only course of action is to slide and twist pieces on the ground until they lock into place.

This allows play to continue for longer stretches of time while creating many dramatic moments that simply aren’t possible in classic Tetris, but it also becomes a different game. The nuances around maneuvering pieces entirely on the ground are different from moving them in the air. For example, O pieces become incredibly tricky at high speeds, as you can rotate them over objects. Other blocks can “climb” certain obstacles when you rotate them, giving you a bit more freedom of movement. It’s a very different skillset, but one that is essential if you want to survive at the highest levels of modern Tetris.

Classic vs. Modern: Which version do you prefer?

Tetris is arguably the greatest game of all-time any way you slice it. That said, there’s essentially two distinct flavours of the game. The classic version really forces you to commit to every move, as blocks lock on impact without any measures to manipulate the order or positioning once they land. However, rounds of Tetris in this mode are generally shorter while also punishing players through RNG.

Modern Tetris adds a number of quality-of-life features to minimize the negative aspects of RNG while also allowing players to survive much longer. However, once the game hits the highest of speeds, the gameplay becomes something that doesn’t really resemble old Tetris anymore.

I can appreciate and enjoy what both are trying to do. In a position where I had to choose one though, I’d go with modern Tetris. I will take the additional mechanics and the “fairer” nature of the game, even if some of its newer additions look odd or gamebreaking to old school Tetris fans. Which version would you rather play?