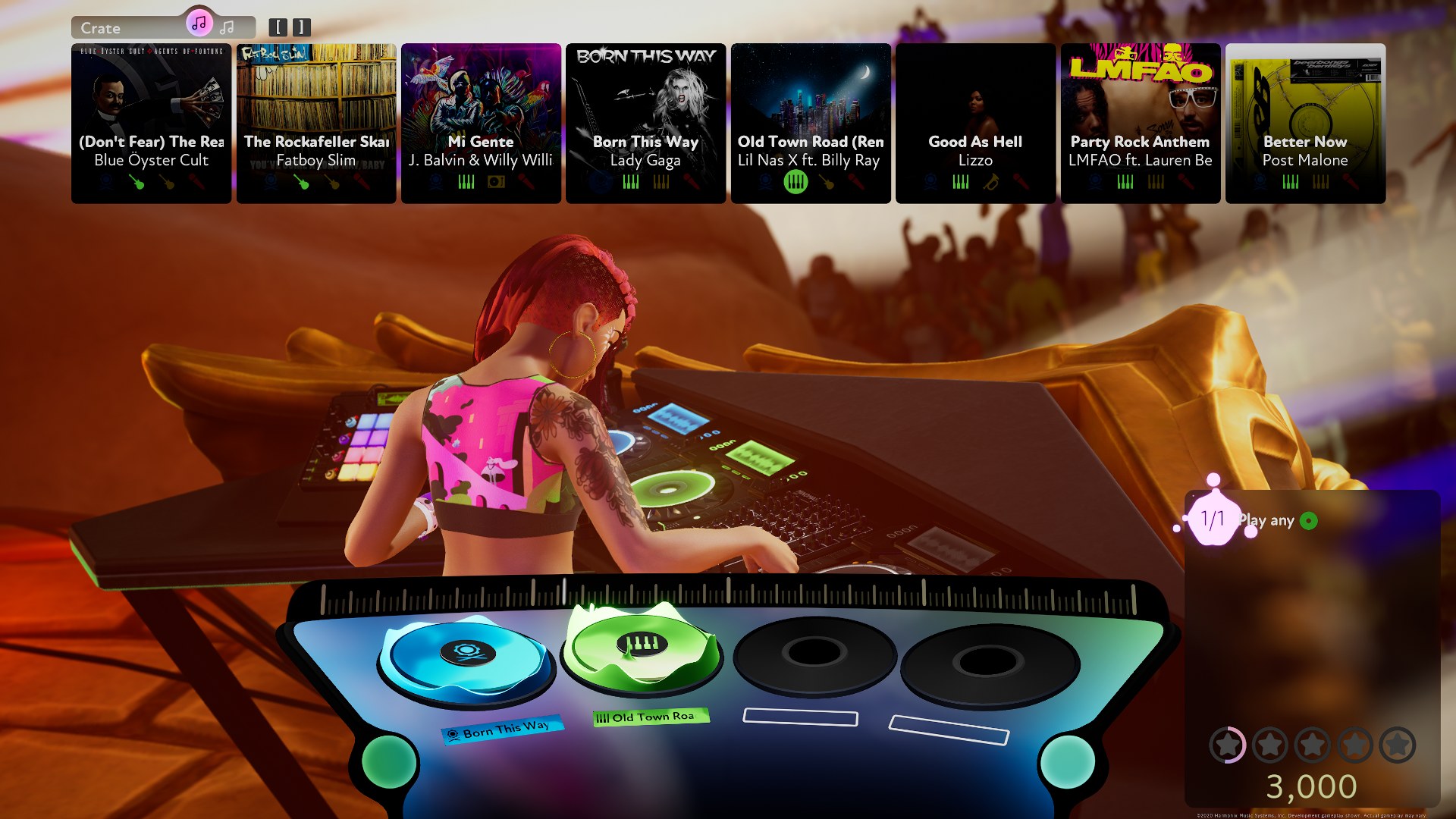 DropMix is a hybrid video game and card game that allows players to mix elements of songs through the use of RFID cards, an RFID reader that’s designed as the game board, and a phone or tablet. Each card is mapped to an element of a song, such as its vocals, guitars, bass, drums, synthesizers, and other instruments. Placing a card on one of the five designated areas on the board will play that element of the song on your phone or tablet. You have the ability to mix-and-match any cards you like to create awesome mash-ups while the game handles all the tempo and pitch-shifting to make everything sound as good as possible.

The experience of playing DropMix is flat-out magical. Some mixes will work out better than others, but it’s mind-boggling how players can freely mix together songs in ways that sound like the work of a professional DJ. I absolutely adore DropMix and nothing will ever knock me off that bandwagon…as small as that bandwagon may be.

In spite of the love from the likes of myself and other DropMix enthusiasts, the game was a commercial failure for a myriad of reasons. Cost was a huge barrier, as the launch price for the base game was a steep $100 USD. That included the game and only 60 cards. More cards were released as expansions and blind packs, but those were expensive too. I wouldn’t make the jump until my local Toys “R” Us sent their entire DropMix inventory to the clearance bin. The game was also marketed as a toy, though its price point and core appeal skew towards an older demographic. After about two years, Harmonix announced that no further content would be created for the game, though the app would remain functional indefinitely.

Fuser may be a new game, but its foundation was instantly recognizable to me upon seeing it in action for the first time. This is basically a video game version of DropMix and I couldn’t be happier to see it get a second lease on life.

What Can DropMix Tell Us About Fuser?

The beat-matching tech is real

Underpinning DropMix and Fuser is Harmonix’s brilliant mixing technology that automatically adjusts tempo and pitch based on what musical elements are in play. All of the videos I’ve seen of Fuser so far show that the music-matching alchemy is still intact. What I actually like about the implementation of the tech in Fuser is that it appears to instantly react to your inputs. With DropMix, there can be a smidgen of delay as the game scans the card and adds the component at the next best moment. Not only does Fuser immediately respond to your music choices, your performance is dependent on you adding music on beat.

One neat feature from DropMix that appears to have carried over is the “DropMix” button. Not sure what this button is called in Fuser just yet. Anyhow, in the card game, hitting that button on the board creates a musical build-up and drop that completely remixes the cards already in play. This feature is also in Fuser and can be triggered by pressing the circle button in the bottom-right hand corner of the DJ table. 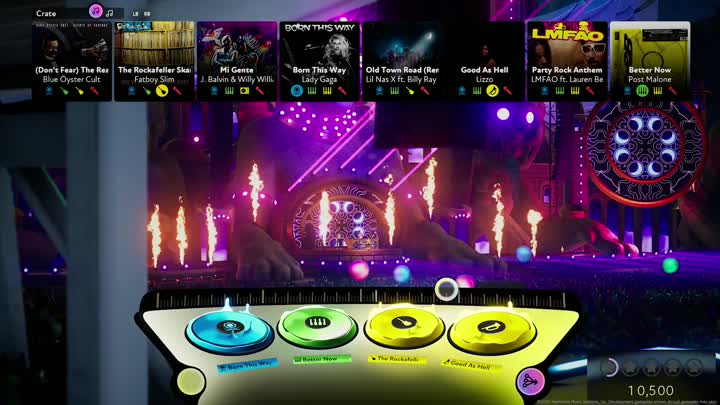 Part of the DropMix magic comes from the way you control it. Playing cards on a table feels intuitive and the response you get from the game by doing so is incredible. Fuser will not get any sort of specialty controller, opting to use a standard controller instead.

Eschewing the idea of a plastic turntable is probably for the best. It would raise the price of the product and the market has no tolerance for plastic instruments in a post Rock Band/Guitar Hero world. The peripheral cost of DropMix is a big part of why it failed as well.

Even so, I cringe every time I see the cursor move around on screen during Fuser gameplay footage, knowing that it’s being controlled by an analog stick. It’s not as fast, precise, or as accurate as digital inputs or playing cards on a table. I really hope there’s a way to use buttons or the d-pad to control everything, especially since the game rewards players for adding and removing elements on downbeats. For now, I’ll try my best to not get overly panicky about this detail. 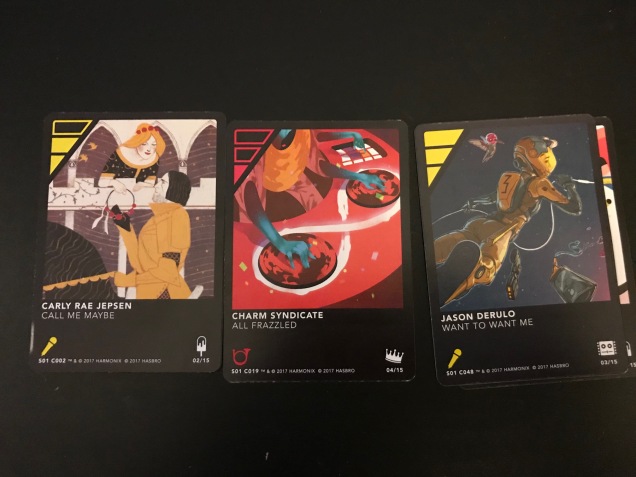 One of the tricks behind DropMix is that each card doesn’t actually feature the entirety of a song. Most of the time, it’ll have the intro, the first verse, and the hook, before looping back on itself. This might be due to music rights, but my gut thinks the edits are to ensure that you’re getting the best parts of a song to mix with others.

Though I can’t say for certain, the preview footage makes it look like Fuser is taking the same approach to cropping tracks. Odds are, if you place every instrument of a track onto the turntables, you’ll get just a chunk of the song before it loops around. Some players might be disappointed at the lack of control, as you’re probably not going to get the opportunity to mix the trap drums of “Old Town Road” with the soaring guitar solo from “Don’t Fear The Reaper”. But for the sake of the songs mixing together, sticking to this approach is probably for the best.

Fuser will give you more music than DropMix did out of the box, but DLC is going to be really important

The base game for DropMix came with 60 cards representing 60 songs. After a few hours, our group had already found a handful of cards we heavily gravitated towards while also finding others to be incredibly difficult to mix. After that first night, I scrambled back to the Toys “R” Us clearance bin to grab whatever expansions I could.

As of writing, we know that Fuser will come with over 100 songs. Some of the confirmed tracks on appears to be an eclectic mix include “Old Town Road” by Lil Nas X ft. Billy Ray Cyrus, “All Star” by Smash Mouth, and “bad guy” by Billie Eilish among many others. Unlike DropMix, you’re getting four parts for 100 songs in Fuser, which would be the equivalent of 400 DropMix cards. That’s a sizable increase that should help extend the life of the base game.

Even so, I imagine that players will still quickly burn through songs as they work through the combinations. Harmonix has already stated that the game will get ongoing support through DLC. I’m content if it’s an a la carte system like Rock Band that allows us to pick-and-choose individual tracks or buy prepackaged bundles at a discount. If the game turns out as good as I think it will be, I’m probably going to spend way too much on DLC.

A subscription service like Guitar Hero Live that gives players access to all of the songs for a monthly fee sounds tantalizing, but that game also highlighted the horrors of losing everything when the servers shut down. It may cost more to pay per song, but I’d rather have the “permanency” that comes with DLC.

Fuser needs to find the right balance between freedom and structure

As much as I love DropMix as a music-mixing experience, it largely fails as a game. Outside of its freestyle mode, its game modes take away from the joy of making music by asking players to engage with gameplay mechanics that are antithetical to the creation of music. After bouncing off of each mode, I spent all of my time in freestyle mode. Mixing songs together at my leisure is fantastic, but the aimlessness of this mode forces players to create their own goals.

Fuser appears to find structure through the concept of requests. Tying into the theme of DJ-ing, requests will appear on the right-hand side of the screen that you’ll need to fulfill within a certain window of time to score points. These requests can come in the form of a genre (play a pop song), decade (play something from the 1980s), or instrument (play something with guitars).

All the while, it seems like you’re free to mix everything else around that however you want. Though I don’t have all of the scoring info handy, it appears that you’ll be scored based on completed requests and timing your drops to land correctly on downbeats. As long as Harmonix can come up with enough interesting request types, this setup feels like the right amount of structure and freedom to make for a compelling DJ game. There are still many questions to be answered about Fuser. What songs are included in the final setlist? How will the multiplayer work? Will there be online play? All of that will be answered in time. For now, I think we know quite a bit about Harmonix’s upcoming game thanks to their work on DropMix. Generally speaking, I think they’re preserving the aspects of DropMix that make it special while providing it with a better framework for success. I’ll be there on day one and can’t wait to try it out!