In retrospect, the original Pokemon Snap was way ahead of its time. Decades before photo mode became a staple in many modern games, Pokemon Snap was essentially Photo Mode: The Video Game. Despite the game’s misgivings, the novelty of taking pictures of cute creatures in their natural habitat made for an experience that we haven’t really seen since.

New Pokemon Snap isn’t going to revolutionize the world like the first one did. It doesn’t have to. Really, it’s primary goal is to give players that same magic of taking photos of Pokemon in the wild while cleaning up some of the originals issues, such as its incredibly-short run-time.

In this one, you don’t play as a pre-defined character. Instead, you get to use any name you like and choose from one-of-eight avatars. It’s a nice touch to get more control over who the protagonist is, as it doesn’t change the story in any way.

Riding in a special vehicle capable of moving across land and sea, you slowly coast through different locales, taking photos of Pokemon. Your ultimate goal is to take high-scoring photos based on the criteria set by Professor Mirror. He prioritizes photos where the Pokemon is centered, large relative to the image, and facing the camera. Ideally, you can snap photos of Pokemon in the midst of unique poses or actions.

Having recently played through the first game, it caught me by surprise how much I enjoyed the experience of taking shots of Pokemon again. With the advent of modern graphics, they look and act as adorable as ever. Actually, there are some…”antagonistic” moments that stand out as well. Whatever the case, it’s such a joy to see Pokemon behaving as they would in their natural habitats.

Just like the last game, your photos are scored based on a criteria set by the professor. Similar to Professor Oak, Professor Mirror prefers pictures of Pokemon centered in the frame, taking up as much space as they can within the frame, and facing the camera. Bonus points if you can catch them in a striking pose. 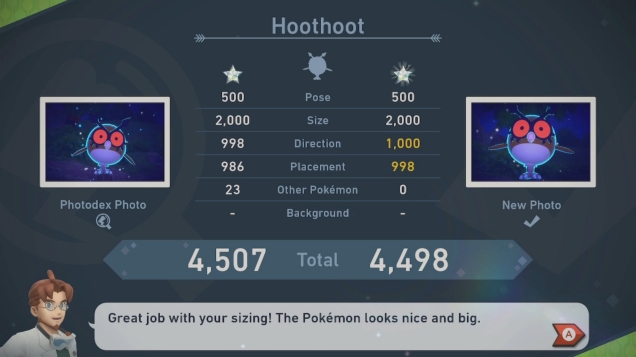 One way in which the game extends the experience is that your Photodex has four photo slots for each Pokemon. You still submit one photo per run, but photos are first graded on a star system based on how unique of a shot it is. The game is really fuzzy on exactly what constitutes a photo being in a specific category, especially since a four-star photo doesn’t guarantee that you’ll get a good score. Nevertheless, it ultimately works as a means of allowing you to keep four photos of a Pokemon versus one, while giving you more reasons to snap the same Pokemon.

After review, you get an opportunity to perfect your photos in the re-snap mode. Though you can’t resubmit re-snapped photos for review, they allow you to retake an existing photo by giving you a 360-degree freeze frame of the photo you took. You’re free to adjust the blur, add filters, nudge the view-finder to center the Pokemon, or even focus on a different Pokemon within the 360 view. You can’t move your pivot point and walk around a Pokemon to take a picture of its face if its butt was originally facing the camera, but you still get a ton of creative control to snap the perfect photos for your personal use. 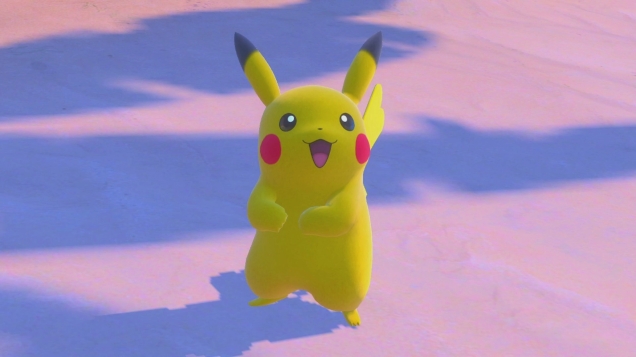 Another new addition to the game is that maps evolve. Almost every map in the game has a day phase and a night phase, each that have some Pokemon unique to each time. Also, there’s a leveling system in place that opens up new variations of existing routes. Not necessarily branching paths, though those are in the game as well. But with each level unlocked, you’ll get Pokemon behaving differently and even some Pokemon unique to specific levels of routes.

Between the inclusion of multiple Photodex slots per Pokemon and multiple variations of routes, the game is trying really hard to extend the experience in meaningful ways. There are even a few major story beats sprinkled throughout that actually add a bit more weight to the whole thing. Who would have thought that I’d ever be uncomfortable talking about spoilers in Pokemon Snap? Yet here we are. 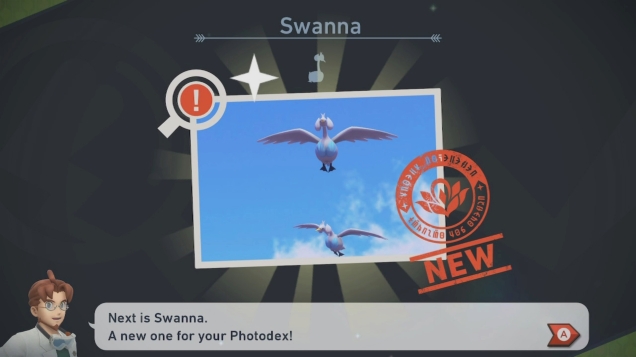 Based on what the game offers, I think it does enough to justify its full price point. We ended up spending 8-10 hours to get through the main story while also feeling motivated to round our our Photodex.

That said, the game does have some inherent grinding to it. There will be times when you’re running a level 2 route multiple times just to get a high enough score for the next route. Factoring in branching paths within each level, and you’re running the same levels a bit more often than I think is warranted.

New Pokemon Snap may lose some of its luster by the time you roll the credits, but it still manages to surprise and delight for much of its run-time. Even if you try and speed through it, the game still runs at a reasonable length and will overwhelm you with cuteness and other cool Pokemon interactions. Definitely a safari worth taking!