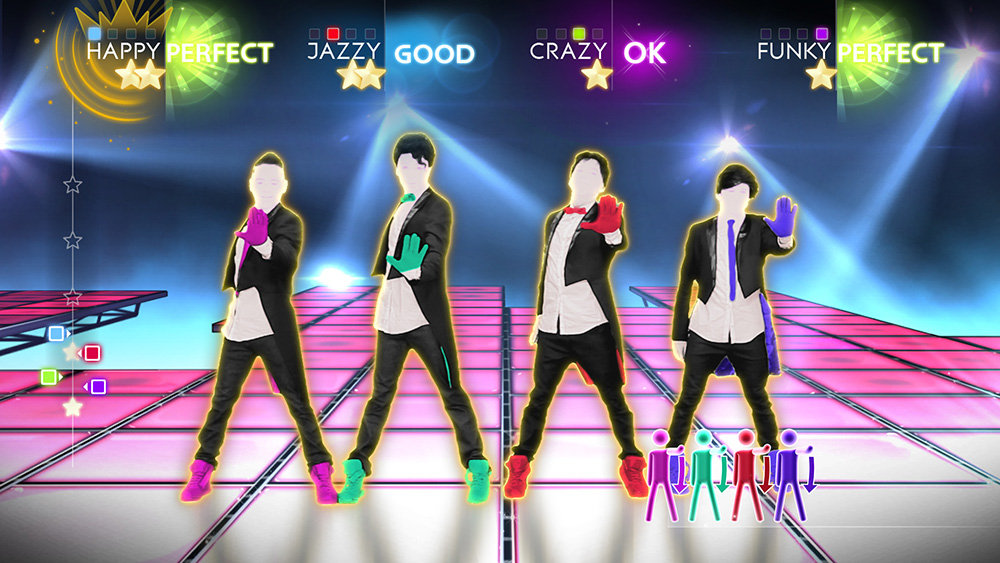 Have you grown tired of cutting a rug with Ubisoft yet? Based on how well the Just Dance series continues to sell, probably not. Just Dance 4 is the recent main-line entry to the series that’s mostly another one of those. However, for fans of the series, that’s not necessarily a bad thing. Also, the Wii U version that I’m playing has a few console-exclusive perks that may be enough get you back on the dance floor once again.

At its core, this is the same Just Dance you’ve been playing since its inception. With your Wii Remote in hand, you follow the on-screen dance moves as best you can. All of the pros and cons of this control scheme carry over to the Wii U, so there should be no surprises. Personally, I’ll always hold the game’s inability to tell you exactly how to score a perfect on every single move against it. However, the counterpoint to that is the fact that Dance Central‘s insistence on accuracy makes it harder to break out at a party and have everyone enjoy it.

Just Dance 4‘s setlist covers a wide range of different musical artists from Elvis to Carly Rae Jepsen. The nature of the setlist is such that you probably won’t like everything, though it should appease most in a party environment. The vast majority of these songs are original recordings, though there are still a few covers strewn about. I personally can’t stand the use of covers in most music games, and here is no exception. You can shore up your playlist with downloadable DLC, though your previous songs won’t carry over, and as of writing there’s only 15 downloadable songs available without any more on the horizon as far as I know. Step your licensing game up, Ubisoft.

Having played 1 and 2 in the past, the choreography is fairly solid, though many of the dances are starting to feel the same. Not sure if it’s because they’re recycling dance moves from the previous games, or if it’s because they’re sticking a bit too closely to the choreography formula that they seemingly employ on every song, but the phenomenon is noticeable to series veterans.

The franchise isn’t really known for its presentation value, though I do enjoy watching the dance routines when the visual accoutrements match the song. At its best, it’s like you’re watching a fancier classic iPod commercial dedicated to that song. My favourite is Rock Lobster, as that one actually has a dancing lobster in it. At its worst, the visuals don’t match the song at all. Rick Astley’s Never Gonna Give You Up is the worst offender by far. Sure, the source material doesn’t give you much to work with, but the super hero motif and dance moves Ubisoft went with feel horribly out of place. Thankfully, there are only a handful of fringe cases like this.

Not sure if this is new to the franchise or not, but it has a number of additional incentives to keep playing. As you complete songs, you gain points that go towards a Mojo meter. Each time that meter reaches a new level, you’ll get the ability to randomly unlock something, such as a new game mode, playlist, or dance routine variation for an existing track. There’s no shortage of things to unlock, though the trade-off is that some of the cool game mode stuff that arguably should be available from the outset are buried behind this.

On the Wii U, you’re getting three extra songs: Want U Back by Cher Lloyd, Domino by Jessie J and a cover of Christina Aguilera’s Ain’t No Other Man. You’re also getting access to a number of Wii U specific functions. Off-TV Play is curiously present, though I have a hard time imagining a use case where dancing in front of your Wii U Gamepad is something anyone would want to do. While one of your dance partners is in the thick of it, you can also use the Wii U Gamepad to draw on the main screen, pull up lyrics to the song, or pick the next track. The most involved use of it is in Puppet Master mode, where its used to select the dance moves just before your dance partners have to execute them. Aside from the ability to cue up songs, most of this is superfluous in nature.

For its intended audience, Just Dance 4 is probably another serviceable entry in the series that will liven up parties until the next one comes out. Steff and I have played our fair share of Just Dance in the past, and we yet again had fun with the new one. With that said, there’s clearly room for improvement and the Wii U version doesn’t do much to play to the platform’s strengths. With the Wii U lineup being as dry as it is, this may not be a bad idea if you’re still looking to shake your booty. At the very least, you can make things better by buying Gagnam Style from the eShop.