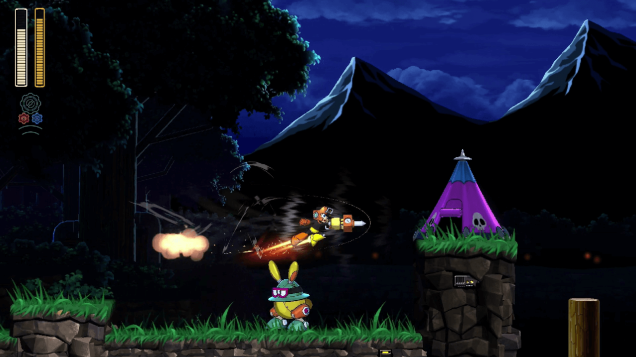 Long time, no see! Not having starred in a new game since the release of the fan-made Mega Man X Street Fighter in 2012, many feared that the Blue Bomber would never find his way back. Six years later, he makes his triumphant return in Mega Man 11. Absence makes the heart grow fonder, but is this game a welcome return for Mega Man?

Once again, Dr. Wily has unleashed a new set of robot masters that Mega Man must dispatch of before ultimately taking down the mad scientist. As is tradition, you can take these stages down in any order before moving into the endgame. This time, he’s attempting to settle the score with Dr. Light, who in their younger days, rejected his prototype double gear system. This system was created in order to give robots an extra boost of speed and power, but Dr. Light shut down the project in favour of researching free-thinking artificial intelligence. Having now perfected the double gear technology, he abducts Dr. Lights robots and equips them with the upgrade, making them the new robot masters to be taken down.

While it doesn’t quite look like old Mega Man thanks to its new art style, it doesn’t necessarily wow you, either. It’s certainly not ugly, but it does feel a bit safe. I do, however, love the fact that Mega Man gets unique costumes for each weapon instead of palette swaps. More problematic at times is Mega Man’s hit box. It’s a bit bigger than his sprite, which gave me issues in a number of spots. There were moments where I would hit my head on a ledge that I thought I was clear of, only to fall into a pit or into spikes. One time, it seemed like the game glitched out, preventing me from jumping up a clear tunnel, causing me get ground up by the incoming blades. In another instance, a pedestrian jump to a ledge on Bounce Man’s stage became infuriating when I would repeatedly bounce off of the wall even though Mega Man’s sprite clearly wasn’t touching anything.

When collision detection issues don’t rear their heard, there’s a lot to like. The gear system adds a new wrinkle to boss fights. Most dramatic of those is Block Man, who transforms into a giant block monster mid-fight.  Other bosses don’t have quite the same level of visual flair to their encounters, but there’s a clear step up in variety that’s appreciated.

Each boss may have a new trick up their sleeve, but Mega Man has a few as well. For one, he is equipped with a double gear system of his own. Pressing the left bumper will give the Blue Bomber temporary access to more powerful shots, while the right bumper grants him a bullet-time-esq speed boost. When you’re low on health, he can activate both at once for the ultimate boost. Be careful though, as you’re using a prototype of the double gear system. Rely on it too much and the unit overheats, which temporarily locks you out of its abilities while making your shots weaker for a time.

Speed gear is crucial to the experience. Many spots in the game are designed to move quickly, essentially giving you reason to slow things down. I also found it to be a great way of landing more shots in a shorter period of time. The power gear seemed useless to me at first, but its benefits come from combining that ability with the unlocked weapons. For example, Blast Man’s bombs stick to their targets and take a few seconds to explode. With power gear on, Mega Man launches one massive bomb that blows up on impact. It’s a really nice touch that gives you more options to tackle a problem.

Playing on normal difficulty has given me flashbacks to the Mega Man games of yesteryear. These levels may not be as unforgiving as the original or Mega Man 9, but you’re going to have to work for it with fast shooting, precision jumping, and memorization of the hazards in each level. Thankfully, if the default setting is too much – and don’t feel ashamed if it is – simply choose one of the two lower difficulty settings for a smoother ride. Or, if you really want to test your mettle, crank it up to superhero mode. I’ll trudge my way through normal, but I’m glad that there are options for everyone. I beat it on Normal, but it was struggle. In the future, I’ll turn it down to Casual. 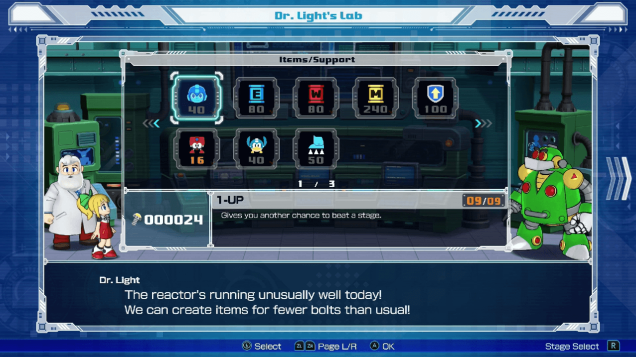 If that isn’t enough, the new shop system gives you even more ways to tweak the experience. Strewn about each level are bolts, which act as currency. Between missions, you can spend those bolts on an assortment of items and power-ups. Being able to buy extra lives and E tanks is a godsend. Furthermore, you can buy other meaningful boosts, such as being able to store more E tanks, reduce recoil on power shots, unlock the ability to move at normal speed during speed gear, and more. The franchise has always been about personal growth in one way or another, and this is a great way to make him stronger beyond simply unlocking weapons from the bosses.

Mega Man 11 proves that an old robot can learn new tricks. Many of the game’s new additions give the franchise a sorely-needed kick in the pants, from more dramatic boss battles, to multiple difficulty settings, and a shop that gives you more options to improve your character over the course of play. It’s not as adventurous in its presentation, and I hope that the game is able to sort out a few of its awkward hit box problems in the future, but this is a great foundation for a new era if Capcom decides to go that route. I’m open to playing more in this vein, but can we also get a Mega Man X reboot in this style while we’re at it?