Yoku’s Island Express is one of the more novel game concepts you’ll come across. Playing the role of a dung beetle postal worker who is tethered to a ball, you’re tasked with delivering mail while also helping to prevent the apocalypse. Oh yeah, and while the game looks like a 2D platformer, you can’t actually jump. You traverse the entire world through walking and by launching yourself with pinball paddles littered throughout the island of Mokumana. Wait, what?

Let’s take a step back. You play as Yoku, a dung beetle. You’ve arrived on the island to start your new job as the island’s mail carrier. However, you’ve arrived just after the island’s deity was viciously attacked by a monster and is now stuck in a restless sleep. It’s up to you to notify the three tribe leaders scattered across the island of the news so that everyone can come together to restore him.

From here, it’s a 2D platformer with a few twists. For one, it’s a Metroidvania-style game where you gain abilities from certain areas that open up pathways to new places. The other wrinkle is the pinball part. The entire world is essentially a series of pinball boards stitched together. Most of the time, you’re going to need to solve puzzles and/or land a series of precision shots within each board to progress to the next.

(Sorry, I didn’t record any footage of my playthrough. But here’s footage from the demo!)

These disparate gameplay styles come together better than I would have imagined. Instead of fighting through enemy-laden corridors, you’re pushing forward by opening gates or blowing up pathways from one board to the next. My favourite moments occur when the game requires you to make a series of skilled shots to progress. For example, you’ll be required at times to attach an explosive slug to your ball from one area of the table in order to blow up a boulder on the other end.

Unlike a traditional pinball game, the penalty for falling off the board is minimal. You simply hit a patch of thorny bushes and lose a few fruits without any loss of life. It does fit with the overall chill vibe of the game, along with its children’s book art style and groovy music.

However, it won’t save you from some of the game’s more challenging sequences. The paddles have a neat trick where they highlight exactly where your ball is on the paddle, but it can still be a challenge to hit pinpoint accurate shots when you need it most. Not saying that the game should have some sort of bailout system or mid-board save states, but eventually, you’re going to have to hit tough shots in order to proceed. During the game’s tougher moments, it took me several minutes to correctly place everything, but I did get enough of a feel to beat the game. 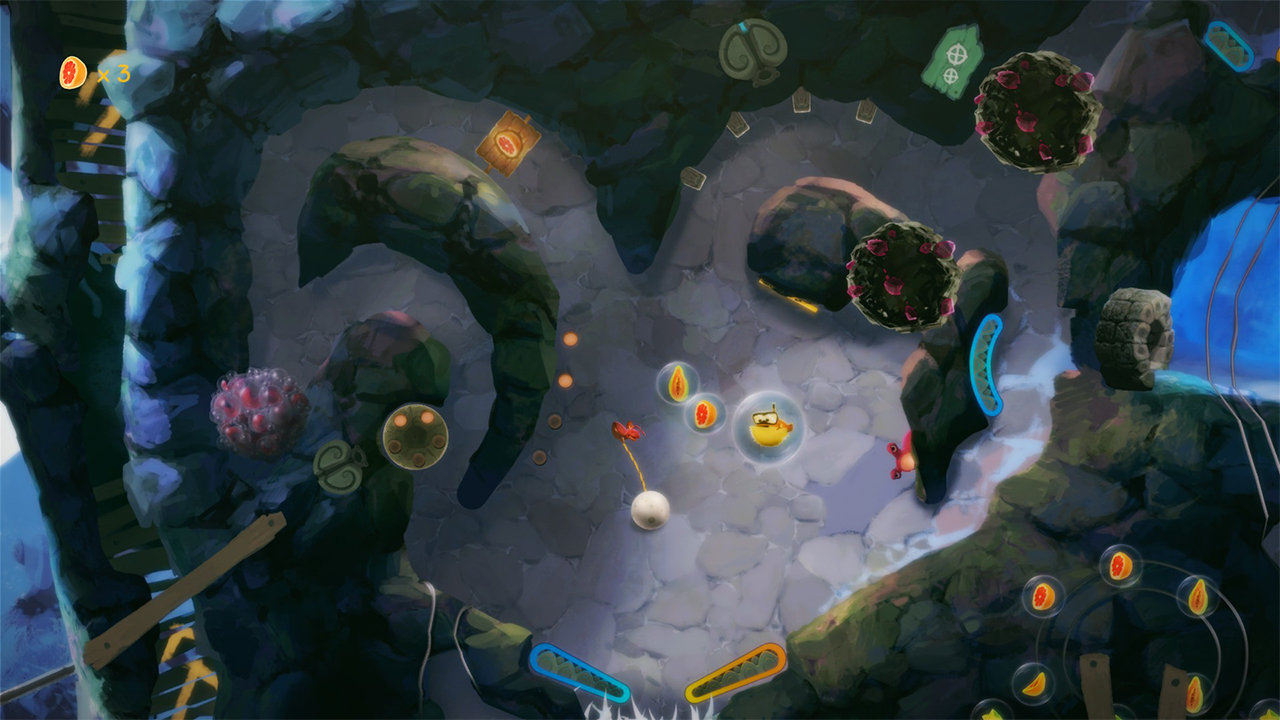 When you’re not pinballing about, there are traversal elements as well. You’ll unlock the ability to swim, as well as a whip that you can use to swing yourself around a flower before launching yourself in a direction. Strewn beyond the main path are lots of hidden rooms and treasures to collect.

I like the extra elements of exploration to round out the experience, but I did have a tough time getting a feel for the swinging. There’s one particular part of the game where you’re required to make a series of swings to the top of a tree that was almost infuriating. Time after time, I would launch myself the wrong way, forcing me to start from the very bottom. You can overcome it eventually, but I feel like the game could have done a bit more to let me gauge my trajectory a bit better.

From its cute presentation, to its unique mix of gameplay styles, Yoku’s Island Express drips with charm. Never really played anything quite like it before and I appreciated how refreshing it was over the course of its six-or-so hour journey. It will test your mettle in spots, but the journey through the island of Mokumana is well worth it.