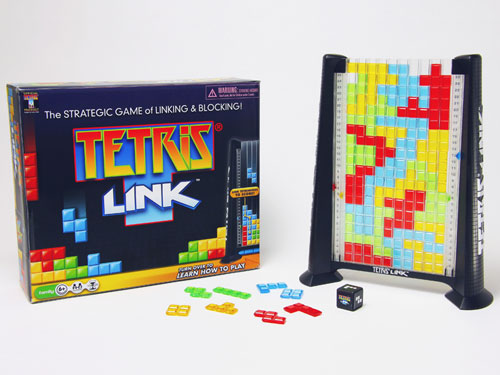 How do you take what is arguably the greatest video game of all-time and translate it to a tabletop gaming experience? Tetris Link may certainly look the part, but this isn’t a game where you wipe blocks out of the well by creating lines. Instead, the basic premise of Tetris has been transformed into something new. Does Tetris Link do enough to stand on its own without alienating those looking for a more Tetris-like experience?

Two-to-four players will play against each other on one vertical board. It certainly looks the part of a Tetris board, as blocks are dropped within the well and they lock into place as you would expect. Along the sides are a scoring track, making it easy for players on all sides to see whose winning.

Each player has five of each Tetromino to place down the well. On your turn, you will roll the die to see which piece you must play. From there, you’ll drop it in the well. During the course of play, your goal is to score the most points by connecting three or more of your blocks into a contiguous chain. Completing a three-piece set to score three points, while every additional block on the chain gives you an additional point. Be mindful of your placements though, as any gaps created by your block will deduct points from your score. When a piece can no longer be played legally, the game ends and the player with the most points wins.

I can see how these rules would be off-putting for some. Attaching this game concept to a well-known gaming IP can be too jarring for those wanting a more traditional Tetris experience. However, the concept of stringing together blocks while trying to prevent others from creating chains is reminiscent of Blokus, a game that’s played using Tetris-like pieces. This made it a bit easier for me to grasp the concept, but even players with no prior experience can grasp this one quickly.

Having to make the choice of whether you build on your own chain or cut someone else off is the most interesting decision you’ll make in the game. This decision becomes very important towards the end, as the limited amount of real estate at the top can force players to create gaps with ill-fitting pieces. In the moment, we had a blast, starting up new games as soon as the last one ended.

Being able to make the right strategic move is incredibly satisfying, but your opportunities to make those moves can be limited at times due to how randomness impacts the outcome. Rolling the S-piece on the first turn and losing a point because it creates a gap really sucks. More dramatically, the endgame rules dictate that you must drop a piece in the well if you can make a legal move. Oftentimes, our endgames featured a large gap on the side, and whoever couldn’t fill it properly would lose a boatload of points, instantly knocking them out of the game.

Tetris Link does not hold up if you’re looking for a purely strategic experience. You will inevitably get hosed for reasons beyond your control and it sucks when that happens. If you want to play a game of this style with less randomness, check out Blokus. Despite that, our group did have a lot of fun with it. It looks gorgeous on the table, is easy to learn, quick to play, and there’s just enough strategic bite to keep players engaged in a casual setting.