The biggest mistake I made with regards to streaming was that I didn’t have enough of a plan. When I started doing this, my goals were laser-focused around production quality. From improving the audio, to ensuring that the stream ran at a steady frame rate, to having the capabilities of hosting a video podcast with friends, I knew what those challenges were and I took active steps to squash them. Sometimes it would take many months for to fix specific issues, but the objectives, roadmap to achieve such objectives, and the benefits of completing them were clear in my head.

What I didn’t really think about were aspects such as viewership, followers, reaching Twitch Affiliate, or virtually any metric of success. I figured that I would start thinking about those after I established a production quality baseline. After all, it shouldn’t take that long to produce a good-enough stream, right? Ha! Between having to save up to buy new parts and figuring out how to use everything just enough to get by, that process took over a year to sort out.

Meanwhile, my channel was still running. Streaming three-to-four times a week, I was growing increasingly frustrated with multi-hour streams going by and zero people tuning in. As the channel grew in terms of followers, I still wasn’t sure what to make of that. It all came to blow up in my face when a dip in viewership caused me to miss out on Twitch Affiliate. Missing out sent me into a multi-month depressive slide. Without having taken the time to formalize my expectations, I was essentially getting mad at myself over nothing.

Though I should have done this before, now seems like a great time to actually get real and formalize my goals for streaming going forward. This is just a start, as I should constantly be evaluating/adding/removing/revising these goals as I go. I may not formally write down every iteration, but having something written down somewhere to hold myself accountable is a great first step.

My goals are as follows:

Last year, I was scared to not hit the $400 goal I set. By the time the show started, we were just about there. By the time it ended, we’d doubled it. Still warms my heart to know that we were able to raise so much for SickKids Hospital here in Toronto.

This year, I want to raise even more. Have a bunch of ideas in my head for how to make the show even better. Looking to promote the heck out of the 25-hour marathon leading up to the big show in November. I’m also kicking around some fundraising ideas to take place before the big day. However I approach it, I want to make a bigger impact for the cause this year! At the very least, I’ve signed up to be a member of the Extra Life Toronto Guild, so I’m hoping to contribute my time and effort by volunteering for events and contributing to the cause that way!

Almost every guide around streaming will recommend streaming on a schedule. That way, viewers can save the date and hopefully write you in as part of their routine. Historically, I’ve been awful at this. Early on, I was streaming every time I played a video game. Sure, I was on 4-5 times a week, but it was really difficult for someone to keep up with me when I stream at 11pm on a Friday, then on a whim stream at Sunday morning at 8am.

Towards the end of the year, I established Wednesday evening as my streaming night. At the beginning of 2019, I shifted the time to an earlier slot, as I’d heard from many that my start time was too late. Hoping to lock down at least one more weeknight as a streaming night. Right now, I torn between Tuesday and Thursday. Will experiment between the two to see what works best.

As for my frequent weekend morning streams? Not sure about those just yet. They’re a very convenient time for me to stream, as I’m an early riser and am generally free until 11am. Its also a good time for some of my European viewers to join. However, viewership during this timeframe isn’t great most of the time, to the point where many morning streams go through long stretches of no one watching. Going forward, I want to make viewership a priority, as I’d much rather stream to one or more viewers than to zero, which is still very possible based on my audience size at the moment. May do the stealth weekend morning stream from time-to-time, but I’m struggling to see a world where it’s a part of my regular routine.

By This Time Next Year

Average number of viewers per stream is a metric used by Twitch to determine whether you’re eligible for Affiliate or Partner status. On paper, it doesn’t seem like averaging three viewers per stream is a lot. For some, it probably isn’t. For me, that was the hardest achievement to unlock. Even now, I hit that final goal with a string of hot streams that I’m not sure I can maintain in the immediate term.

Besides being the hardest one to build, it’s also the most meaningful success metric to me. When I stream, I want to see people in there with me. Not just anyone. Cool people who enjoy my company and the company of the others in the community. People who are engaged, respectful, and are okay with a bit of silliness from time-to-time. Totally understand that not every follower will be able to watch me at all times, but will continue to do what I can to grow this community.

10 still doesn’t sound like a lot in layman’s terms, but based on my experience thus far, 10 is rather aggressive. Will continue to stream at a regular clip, promote the channel, and do what I can to convince you to hang out with me a few times a week!

What I’m Not Actively Working Towards 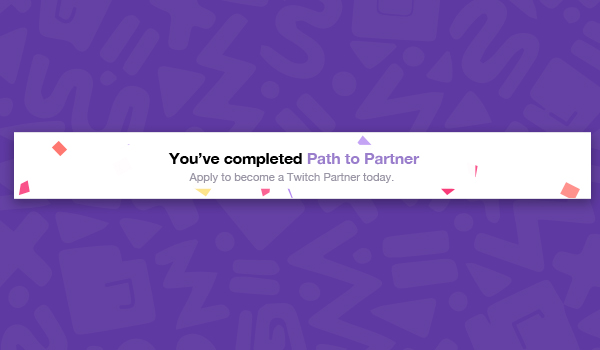 The highest tier of streamer, Twitch Partner comes with even more perks than Twitch Affiliate. However, the requirements needed to reach that level are massive. Most glaring is the disparity between average number of viewers between Affiliate and Partner. Affiliates need an average number of 3 viewers over the course of a 30-day period, while Partners need to average 75! Realistically, I’m not sniffing an average of 75 viewers any time soon. Nor do I think I’m willing to put in the work to get there right away – if ever. Let’s focus on the goal of 10 average viewers per stream for now and adjust as needed!

That felt really good to write down. Having it all laid out on paper like that gives me something to reference when I’m trying to determine how successful this project has been and what I’d need to do to make things better. Also, these goals aren’t set in stone! Things will change with time, and I’ll at least adjust the goals in my head accordingly. I’m excited to move forward with a bit more direction!