The recently passed Guilty Gear -Strive- beta came with seven playable characters. Though more will be added, I thought that the characters chosen gave us a great opportunity to explore a number of different play styles. Based on my my time with the beta, here are the characters ranked based on my hype levels after seeing them in action!

The game’s fiery sword-wielder finished the beta as my most-used character and the one I’m most excited for. His aggressive style of play allows him to pummel his foes with brute force and endless swag.

Once I started to get a hang of the overall gameplay system, Sol and I immediately clicked. At this juncture, Sol is probably going to be my main character going into the launch of the final product.

Admittedly, I played maybe a match or two at most with Faust. But what has him so high up on the list is his ultra-creepy look and wacky move list. From crawling out of himself (you have to see it to fully understand), to throwing random objects on the screen, to giving his opponents afros in order to expand their hitboxes, Faust is one of the most creative characters I’ve seen in a fighting game.

Fast and acrobatic, Chipp looks insanely cool in motion. I mean, look at this!

He runs up the wall while continually juggling his opponent upwards with sword slashes. It might grow tiresome over time, but I’ll be damned if that isn’t one of the coolest things I’ve ever seen in a fighting game. Loses points for being really hard to play, but I can’t wait to watch the experts go nuts with him!

Incredibly cute and somehow blessed with the superpower of being able to conjure large aquatic mammals, May can be incredibly deadly. Before the online play was made available, fighting game legend IFCYipeS showcased a combo that included a whopping five dolphin dives. I’m only less excited to play her because her special moves require charge motions and I’m not great with those.

Spent little time playing as the big body, but he surprised me with his gameplay. I would expect him to rely heavily on his command grab, but he has a lot of tools to hit people at long ranges. Also, you really don’t want to get grabbed! The damage is insane! 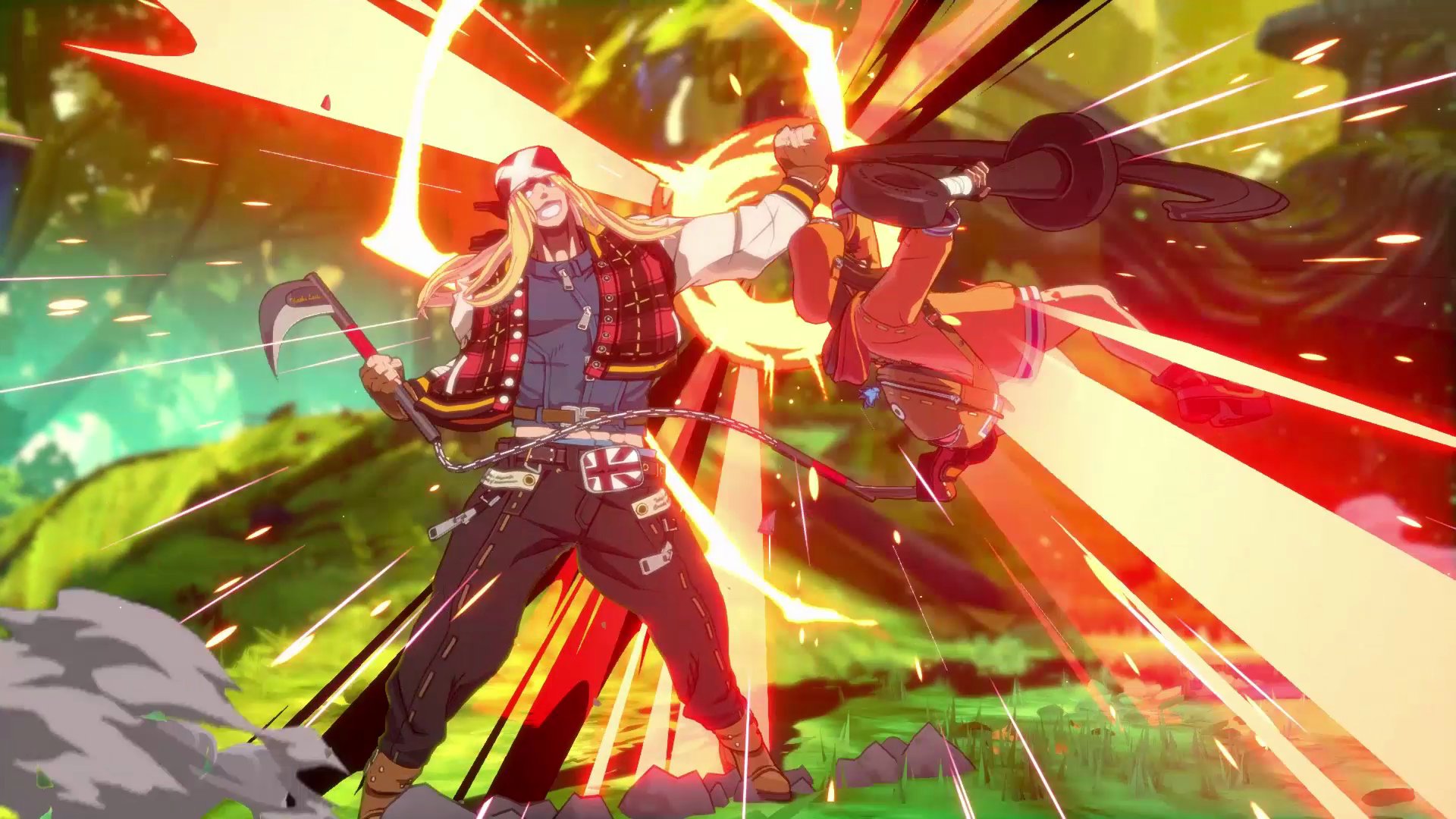 Axl is essentially the Dhalsim equivalent in Guilty Gear. He frequently attacks by throwing his chain scythes around the screen, giving him incredible control from a distance. What impressed me most was the ways that the chains moved around in more circular patterns to feel more like swinging chains than extending sticks. His most fun move is a full-screen command grab that ends with a cinematic clothesline that would make JBL proud.

Ky is…fine. Actually, I think he’s a solid all-around fighter with no major weaknesses. However, his fighting style is very…pedestrian. Designed to be sort of this game’s equivalent to Ryu, he specializes in keeping his opponents at a comfortable distance through pokes, fireballs, and simplistic combos. Great for those just starting out, but for a game with such a heavy emphasis on style, Ky is the dinner rolls at the all-you-can-eat buffet.