Wanting to escape the soul-crushing corporate world, you retreat to the farm that once belonged to your grandfather. The cabin is tiny and wilderness has reclaimed the land, but with a lot of elbow grease, you can restore it to its former glory.

Thus, your adventure in Stardew Valley begins. Even with over 10 million sold since its 2016 launch, I still found a patch of land to call my own.

At its core, Stardew Valley is a farming simulator in the format that titles like Harvest Moon established decades ago. Time moves at an accelerated pace, but still follows a day/night cycle and seasonal cycle. From day-to-day, you’ll tend to your farm by preparing the land, adding fertilizer, planting seeds, watering your crops, and harvesting the goods to sell. With the additional revenue, you can use that money for supplies that will help make your farm more successful. 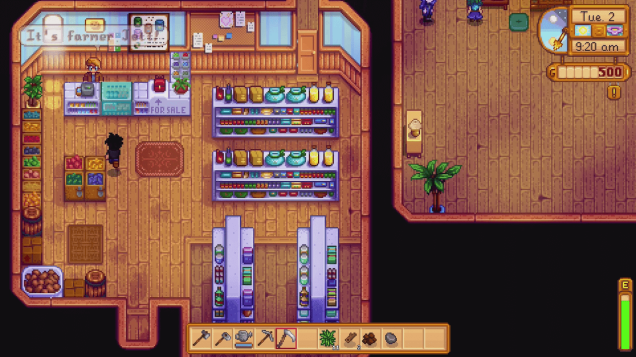 Besides farming, there are a number of other activities once can partake in. Stardew Valley is home to a number of villagers that you can get to know better. Maybe with a bit of nurturing, you might find your future soulmate here. Or not. Maybe you focus on fishing. Or mining in the caves. Or solving the mystery of the run-down community centre. Or a little bit of everything.

You’re free to take things on however you like. But there are some realities that will slow you down. For one, there’s only 20 usable hours in a day at maximum. Stores and other public establishments have business hours which don’t necessarily line up with one another. Certain crops and activities are only available during certain times of the year.

Then there’s the whole energy thing. Your character has a finite pool of energy for physical activities. Food can help you restore some of it, but it’s particularly expensive at the start and you still have to find time for sleep. In a worst case scenario, you’ll pass out. If you pass out anywhere other than your home, someone will take you home, but charge you 10% of your money for the trouble. Losing upwards of 1,000 gold for pushing yourself a bit too hard is incredibly costly, so avoid that as best you can.

Whether you’re taking things day-by-day or you’re working towards building an empire by the time the game “ends”, time management is key. Even though I stumbled my way through, I always felt the pressure of what I should do next. At the very least, I didn’t want to be caught outside of my house with no energy left.

Despite my general disinterest in agriculture, I found myself getting absorbed in the process of improving my farm. Starting small with just five packs of seeds, I started to get into the challenge of building a farm that consistently generates income. My farm was far from optimal, but I enjoyed the evolving challenge as I earned more money, opened up new options, and found other activities to keep me busy.

The game also does a great job at giving players more to experience beyond the farming. There’s a persistent flow of plot points involving the townspeople that really bring the world and its characters to life. Should you so choose, you can court pretty much anyone in the game, regardless of orientation. There are a number of other activities to partake in, from fishing, to collecting rare items for the library, to partaking in a dungeon crawl with light combat elements. Whether you want to take things as they come or maximize every waking moment, there are so many things you can do to stay engaged.

As icing on the cake, the game added local and online co-op play post-launch. One person will act as host, while others will join your farm to play along. This can be done either with an existing farm or a new one. Players can adjust whether resources are shared and what the profit margin is on sold items to better balance the game. Did run into moments of lag where the game would completely pause, but the game’s general pacing is such that it doesn’t hurt the overall experience too much. I think most players will gravitate towards the solo farming experience, but it’s a great option to have.

With so much great stuff to do, Stardew Valley does an impeccable job at absorbing players into its world. Even as someone whose never played a farming sim before, I enjoyed the process of building up my farm, getting familiar with my townspeople, and feeling like I could approach the game however I wanted. Really glad to have gone out on a limb for this one.